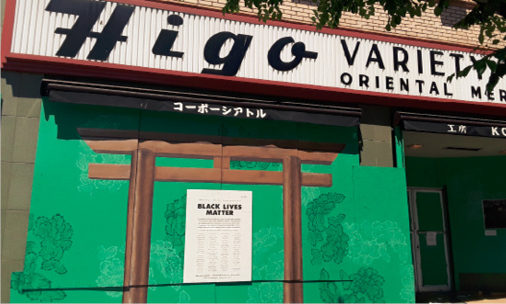 When most International District and Nihonmachi small businesses are boarded up, what is an owner to do?
The front windows of many Chinatown-International District small businesses were boarded up after the George Floyd protest of May 30. Then, criminals took advantage of the peaceful march and began breaking CID windows and looting. The boarding of 21 affected storefronts—and others out of fear that they were next—was provided free by community groups and Seattle Public Utilities. The city recognized the neighborhood was being targeted and wanted to help. Six weeks later, the widespread boarding of the CID remains.

Following the window-boarding, the darkened businesses accepted the help of artists, who donated their time to paint about 100 murals on the new, bare wood. The art makes the neighborhood look better. It helps residents and visitors feel more hopeful.

Here, I examine the murals posted on Japanese, Japanese-American, or Japanese-themed businesses or buildings and how that art got there. Doing so is worthwhile because it illustrates the positive paths forward being taken by artists and businesses in the midst of a level of city disruption not seen in over fifty years. Moreover, it captures the ephemeral art that many readers will not see, owing to their staying home to avoid coronavirus.

To begin, it is worth noting that only a few Japanese businesses remain in the CID. Across the decades, most such family businesses have closed, simply because they accomplished their goal: that of employing parents until their retirement and putting kids through school. The kids moved on owing to the greater opportunities available to them. They also knew how much work each of those shops represents, for only limited return.

Of the ten such storefronts I examined, the murals of most are simply practical. The art makes clear the names of the covered stores, that they are still open, and their hours. The basic level of the art of most murals suggests that they are student community projects. A June 14 Seattle Times story mentions the participation of Franklin High students.

More intriguing, however, are the stories of two murals that especially catch my eye. The first covers the windows of Artform (custom framing) in the HT Kubota Building at Sixth and Main. The second splays widely across the Jackson Building storefronts of Momo (fashion), Kobo at Higo (gifts), and Kaname (restaurant) at Sixth and Jackson.

The Artform art is immediately recognizable as that of professional artist, Michelle Kumata. Among other media, Ms. Kumata makes pen-and-ink drawings of Issei and Nisei from black and white photographs from the early 20th century. She explained in an email that the Artform work was coordinated by Christa Thomas, of Wknd Studio (which shares the same building, along with Bryan Ohno gallery, Tsukushinbo restaurant, and DaDaDa gallery). The two artists collaborated on the design, and had volunteers help paint. Ms. Thomas arranged for donations of large photocopies of Ms. Kumata’s work from an architecture studio. The project took about a week.

At Artform, the art alone must speak, for no words accompany it. I find it uplifting because as an Asian American, I see too few drawings of people who look like me across my weeks. To me, the silent faces staring outward say, “We are also people who have been discriminated against. And yet, here we are…” By way of background, Ms. Kumata previously held artistic “day jobs” for years, including decade-plus stints as a graphic artist at the Seattle Times and as exhibit director at Wing Luke Museum.
An ensemble of images that is even more arresting than those at Artform are the portraits and messages that splay widely across Momo (fashion), Kobo at Higo (gifts), and Kaname (restaurant). For the visages are recently fallen Black citizens. Moreover, a public message is enclosed by a torii, a Japanese gate. It reads,

“THE JAPANESE AMERICAN COMMUNITY STANDS IN UNWAVERING SOLIDARITY WITH OUR BLACK, BROWN, AND INDIGENOUS SIBLINGS, WHO STOOD WITH US THROUGH THE MASS INCARCERATION OF OUR PEOPLE DURING WWII. WE ACKNOWLEDGE ASIAN AMERICANS’ LEGACY OF COMPLICITY IN WHITE SUPREMACY AND COMMIT TO THE ONGOING DISMANTLING OF IT. WE ACKNOWLEDGE THAT ASIAN AMERICAN ACTIVISM IS DEEPLY INFLUENCED BY AND IN DEBT TO BLACK AMERICAN ACTIVISM. WE COMMIT TO USING OUR STRENGTH AND PRIVILEGE TO ACHIEVE LIBERATION FOR ALL PEOPLE.”

The proclamation is followed by a list of 83 names, beginning with those of George Floyd, Breonna Taylor, and Ahmaud Abery, and ending with Emmit Till, Rev. Dr. Martin Luther King, Malcolm X, “and countless others.”

Wondering about the significance of enclosing the message in a torii, I went to Google, where the top-line description reads, “A torii is a traditional Japanese gate most commonly found at the entrance of… a Shinto shrine… it symbolically marks the transition from the mundane to the sacred.”

Finally, to get more of the mural’s back-story, I emailed Erin Shigaki. While Ms. Shigaki’s name is absent from the signatures on the mural, I had heard, through the grapevine, that she is the lead artist behind it. Erin has been in the news of late owing to the defacing of her public art at Bellevue College.

As Erin explained, while she mainly makes a living as a graphic designer, she “started working in public art a few years ago after taking a City of Seattle Office of Arts and Culture Public Art Boot Camp. I also have found much community support to make work about the incarceration… especially from Densho and the Murakami brothers (owners of the Jackson Building). So when the… brothers asked me to handle their boarded up building, I immediately said yes and put together a team. After the vigilante death of Ahmaud Arbery, I had been looking for a wall on which to make a Black Lives Matter mural. The timing was perfect. The Murakamis paid for supplies, snacks, compensation for my main collaborator Scott, and provided labor. They insisted on also giving me a few hundred dollars in compensation, which I will donate back to Black community organizations… a project like this wound up taking three full days. We could not have done it without many community volunteers…”

Visually, the juxtaposition of the American civil rights messaging with the Momo-Kobo-Kaname Japanese-language storefront signage is stunning. It makes us pause and think while also uplifting our spirits.

Two lessons emerge from the murals at Artform and Momo-Kobo-Kaname. First, it is probably worthwhile for building and business owners in need of a public mural to engage established artists. The latter have the talent and networks to complete complex projects in a timely way that can make one’s storefront(s) stand out. Such work in turn may capture media attention that amplifies public awareness of the sponsoring businesses. Moreover, unlike many simpler CID murals, the Artform and Momo-Kobo-Kaname ones remain free of later graffiti. Is it “street code” to leave stunning public art alone?