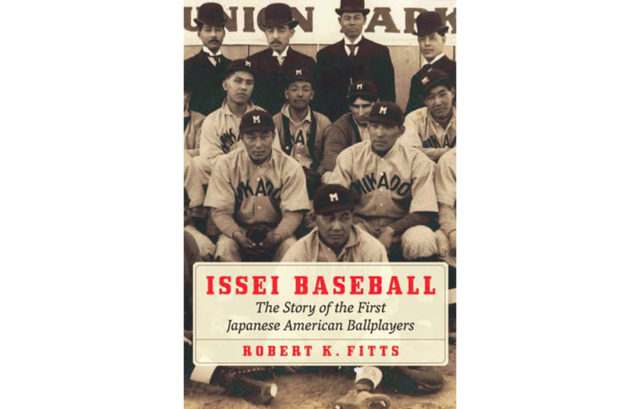 A fascinating new book by Robert K. Fitts set to be released on Wednesday, April 1, tells the colorful, inspiring, and at times heartbreaking stories of the first Japanese American baseball players.

Issei Baseball (University of Nebraska Press) takes us back to the early Meiji days, when baseball was in its infancy and Japanese players ran the bases wearing tabi socks and fielded without gloves. Fitts builds the tension as the Ichiko high school team takes on the arrogant Westerners at the Yokohama Country & Athletic Club. “They boast of their skill in baseball,” a player on the Ichiko squad wrote at the time. “When we attempt to challenge them, they refuse, saying ‘Baseball is our national game,’ or ‘Our bodies are twice the size of yours.’’’ When the Ichiko high schoolers crush the YC&AC squad 29-4, the Westerners are stunned, and the Japanese students elated.

From there, Fitts chronicles the rise of the Waseda and Keio squads, their tours of the US in the early 20th century, and the formation of barnstorming Japanese American teams that would tour the country to great fanfare from 1905 into the 1910s.

While Fitts’ research is exhaustive, his writing style is engaging. He paints a vivid picture of the brawling, hard-drinking Rafu Shimpo newsroom in Los Angeles, for example. The sons of samurai were all too aware of the vices LA offered. Fitts writes, “On Harase’s second day at the paper, he arrived at the office and ‘was first surprised by the smell of alcohol, second by groans, and by finding a monster-like person, named Ono, sleeping on the floor wrapped in a newspaper.”

This is no dry history! But where Fitts really shines is on the baseball diamond. His depiction of the many games played across the US by barnstorming squads is excellent. My single favorite moment is his description of a suicide squeeze play. It made my spine tingle.

If you’re a baseball fan missing our national game right now or just someone who wants to learn more about the Issei immigrants and the battles they fought to get the JA community where it is today, I highly recommend Issei Baseball. And one final note about the exhaustive research Fitts did for this book: The appendix is amazing. It not only tells you the scores of most of the games played by Japanese university teams and Japanese American barnstorming squads in the US from 1905 through 1911, but also includes a list of all known Issei teams from 1904 through 1910 and partial rosters of those teams.

The book is available at Amazom.com: