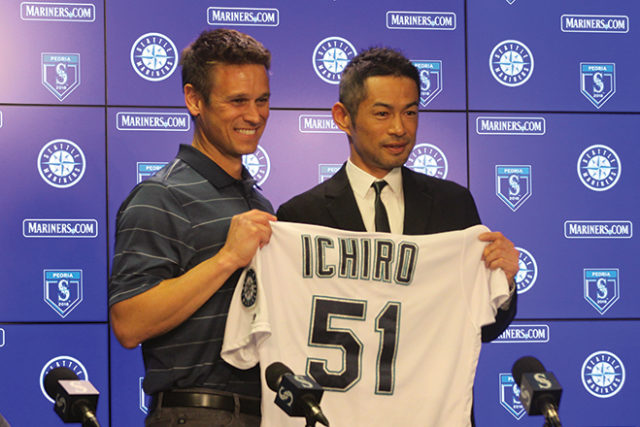 The 44-year-old Ichiro Suzuki may have a few more grey hairs, but he’s back in a Seattle Mariners uniform this season after spending more than five years in New York and Miami.

Ichiro has said he wants to play until he’s at least 50. Perhaps he’s inspired by Kazuyoshi
Miura, the 51-year-old soccer legend who recently signed a one-year deal with Yokohama
FC. But more likely, Ichiro just can’t say goodbye to the game he loves. When a Miami newspaper reporter asked him what he would do after he retires from baseball, Ichiro replied, “I think I’ll just die.”

Ichiro’s return gives Mariners fans cause to celebrate. Last year, playing for the Miami Marlins, he hit a homerun in what many fans thought was his last at bat at Safeco Field. Now, we’ll get another chance to see him, although as a platoon player and pinch hitter, not an everyday starter.

In some ways, Ichiro never left. He kept his home here despite playing on the other coast. And when he donned a Mariners uniform in spring training this year, he called it “a special moment.”

“Somewhere deep inside, I wanted to return and wear this uniform again,” Ichiro said. “Seattle has always been home.”

If he’s in the starting lineup on March 29 for Opening Night against the Cleveland Indians, you can bet that Safeco will erupt once again in chants of “I-chi-ro! I-chi-ro!”

Ichiro Artifacts on Display in Cooperstown