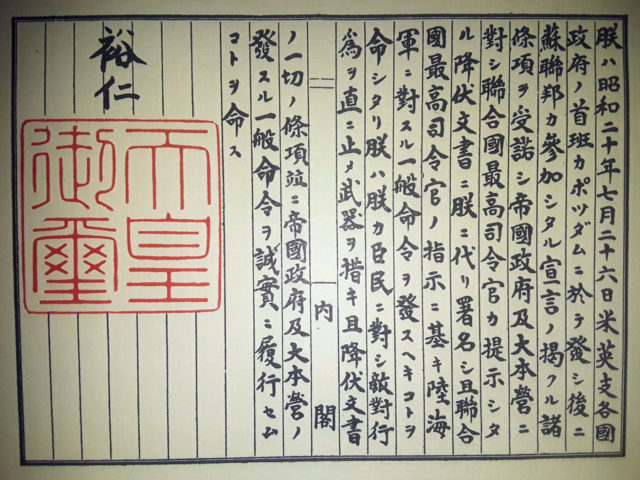 Seventy-five years ago, during August-September 1945, World War II ended with Japan’s surrender to the Allied Powers. Today, two dates are remembered as “V-J Day,” where the letters abbreviate “Victory over Japan.”

The first V-J Day, August 15, is observed in the United Kingdom. That day–Aug. 14 in the US—is when the Japanese government cabled the US that they would accept the terms for unconditional surrender in the Allied Powers’ Potsdam Declaration. It is also when the Japanese emperor famously addressed his people by radio that they must “pave the way for… peace… by enduring the unendurable…”

The second V-J Day is September 2. On it, formal surrender documents were signed, onboard the USS Missouri, in Tokyo Bay. This is the date commemorated in the United States.

While the paired events seem distant from Japanese-American life today, I was reminded how they lie just below the surface when in early August, tidying up, I happened on replicas of the bilingual documents associated with the September signing among my grandfather’s papers.

While the English-language “Instrument of Surrender” document is well known and visually unremarkable—it is simply typewritten—three accompanying Japanese documents, an example of which is above right, are striking. Probably many readers, like me, have never seen them before.

An accompanying English translation of the first document reads:

“By the Grace of Heaven, Emperor of Japan, seated on the Throne occupied by the same Dynasty changeless through ages eternal,

To all to whom these Presents shall come, Greeting!

We do here authorise Mamoru Shigemitsu [重光 葵], Zyosanmi, First Class of the Imperial Order of the Rising Sun to attach his signature by command and in behalf of Ourselves and Our Government unto the Instrument of Surrender which is required by the Supreme Commander for the Allied Powers to be signed.

In witness whereof, We have hereunto set Our signature and caused the Great Seal of the Empire to be affixed.

Given at Our Palace in Tokyo, this first day of the ninth month of the twentieth year of Syowa, being the two thousand six hundred and fifth year from the Accession of the Emperor Zinmu.

A translation of the third Japanese document, the first page of two written in bold script (above right), reads:

This second day of the ninth month of twentieth year of Syowa.

Scarcely known in the West, the Japanese documents make it crystal clear to the Japanese people the authority with which the Japanese signers ended the war, and led their country into an unknown future. They also show the imperial order going down the chain of command. Today, we can see that all signers did the right thing.

For completeness, the corresponding English-language document that Shigemitsu and Umezu signed, with representatives from nine Allied countries, reads:

“We, acting by command of and in behalf of the Emperor of Japan, the Japanese Government and the Japanese Imperial General Headquarters, hereby accept the provisions set forth in the declaration issued by the heads of the Governments of the United States, China and Great Britain on 26 July 1945, at Potsdam, and subsequently adhered to by the Union of Soviet Socialist Republics, which four powers are hereafter referred to as the Allied Powers.