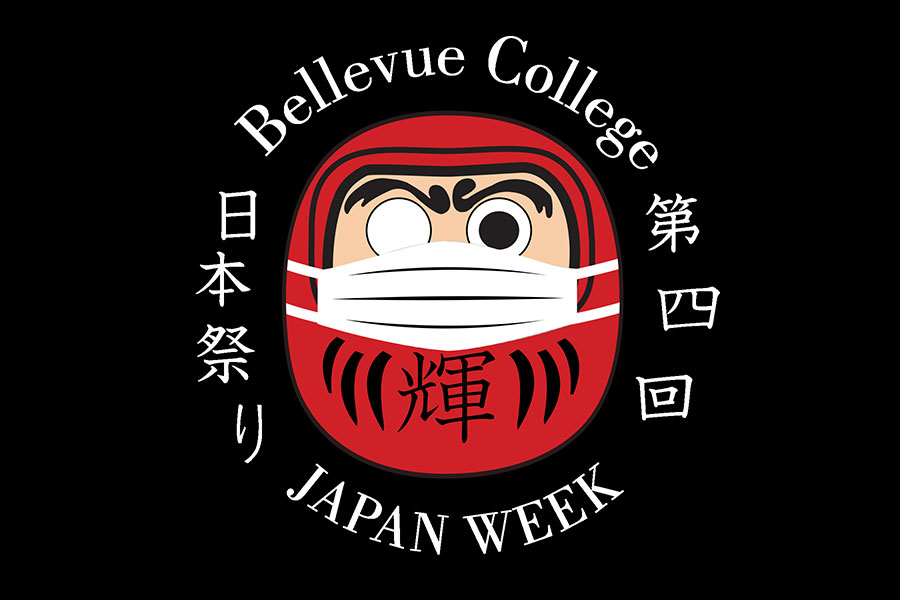 Benjamin Narkmon was the co-president of the Japanese Culture Exchange Club at Bellevue College, which he attended as a high school student. He is now a UW freshman, planning on studying either linguistics or Japanese literature.

“To bring Japan to our students and community.” For the previous three years, this has been the Bellevue College Japanese Culture Exchange Club’s (JCEC) mission as we worked to plan and carry out Japan Week. Japan Week is Bellevue College’s largest event planned by students. Students write project proposals, and are involved in every aspect, from t-shirt, poster, and website design to video editing and fundraising efforts. It takes over half a year to plan. This year, more than any other recently, it has been difficult to visit Japan. With this and everyone’s safety in mind, we aimed to give the community a familiar, yet new experience. Japan Week went virtual. We gave our beloved Daruma mascot a mask to promote safety and got to work.

Unlike previous years, where club members would hold meetings and exchange ideas in-person, the JCEC had to work through Zoom and e-mail. Many club members were in different locations and time zones. A major challenge this year was encouraging audience participation, as it was much more difficult online than at an on-campus festival. We considered livestreams, and ultimately, there were two live, online events. Unfortunately, having the entire event streamed live, synchronously, was not logistically feasible. However, like the phrase associated with the Daruma, “Seven times down, eight times up,” we realized that making the event asynchronous would allow visitors to access the event’s many Japan-related topics at their convenience. Not only that, but Japan Week would be accessible from anywhere. And it worked. We received over 3,300 visitors from 46 countries, and contest submissions from other states and around the world, including France, Australia, and Indonesia. At first, we believed that we would only receive submissions from the local community, but we hurriedly prepared non-local prizes in case the contest winners were from overseas.

Given the nature of this year’s Japan Week, we had to sacrifice some things, such as the popular Dango Workshop (which was adapted into a video), and the Japan Market and Flea Market, in which community-donated items and Japan Week t-shirts are sold. It goes without saying, the biggest sacrifice was the on-campus festival.

However, thanks to the community’s support, the JCEC was able to adapt. The Consulate-General of Japan in Seattle, who supports Japan Week every year, offered a plethora of Japan-related videos we could choose from, making the asynchronous event much more realizable. Though we had to cancel the Karaoke Contest, due to risk of copyright issues, we replaced it with a Kendama Contest with the help of Nick and Zack Gallagher—the BC alumni and well known Kendama champions who hosted and judged the Kendama Tournament at Japan Week last year.

Like Japan Week’s Daruma mascot, in the face of adversity, the JCEC got back up, thanks to the community’s support. We hope that next year the pandemic comes to an end, and our Daruma will be able to take its mask off and welcome you to Japan Week 2021.