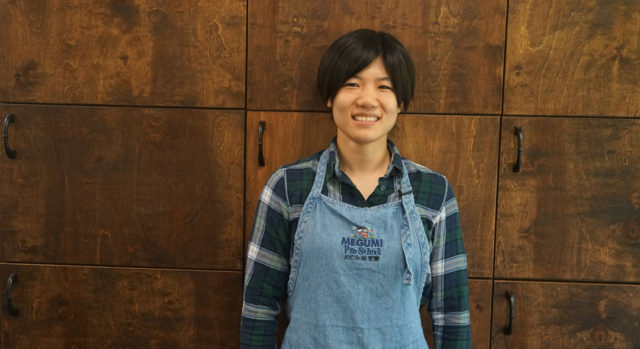 In September, a judo star came to Megumi Preschool. Misato Nakamura has represented Japan as an Olympic judo competitor in Beijing, London, and Rio de Janeiro. I joined her on her first visit to the preschool class and listened to her talk about a variety of topics including what it takes to master judo.

Misato Nakamura is Japanese woman judo competitor. She won the national middle school judo championship (44kg division) during her second year of middle school, and has since achieved amazing results at the World Masters, Grand Slam, Asia Games and other large competitions. She has won gold medals at the 2009, 2011, and 2015 World Judo Championships. She won bronze medals at the 2008 Beijing Olympics and the 2016 Rio de Janeiro Olympics.

Why I continue to practice judo

I have been interested in martial arts since I was in elementary school. At first, I tried Kyokushin karate. I thought it was really fun, but my mom begged me to stop. “It’s dangerous. Stop that kicking,” she would say. So I decided to try a different martial art. As I tried Aikido and others, I was really attracted to judo and started practicing. Back then, I was rather small, and I thought it was so cool to see small people throwing around much larger people.

When I graduated elementary school, I found out that a local middle school around my house didn’t have a judo club. To be honest, I was thinking that I’d just quit judo and start playing softball (laughs)! But then my sensei at the Sobukan Yoshida Dojo told me, “Keep trying, because you will get stronger.” He recommended that I enter a middle school near the dojo and I did. I lived in a dorm and began my daily judo practice in earnest.

At first, I was desperate every day just to get through the practice. There was no one weaker than me around. I wasn’t that strong. The highest I got was No. 3 in Tokyo. I didn’t get any further in my first year of middle school. However, I won the national tournament in my second year of middle school, and that immediately gave me the motivation I needed. In my third year of middle school, my teacher gave me some career advice, recommending that I go to a high school which would make it easier to get hired by Mitsui Sumitomo Insurance Group because they had a women’s judo club. I decided to take that path.

Dominating the world of judo

I began thinking about world rankings when I was in my first year of high school. This came about because I won the Koudoukanhai ( a famous annual national tournament in Japan), which has no age limits, and then the Fukuoka International Women’s Championship. Until then, I just focused on taking down the opponent right in front of me. Once I had experienced an international competition, I knew I could compete against competitors from around the world.

The next turning point was when I entered Mitsui Sumitomo Insurance Group and in my first year went to Beijing to compete in the Olympics. I earned a bronze medal and received a lot of publicity for being the first medalist born in the Heisei Era. I didn’t understand what was so great about that. But when I thought about it, there was no one else about whom that could be said. When I look back, I am glad I got that medal.

The next year, I won the World Judo Championships. After competing in Beijing, I wasn’t nervous. The people competing were the same I had faced at other international competitions. It was only the location that was different. I competed on the competition’s second day, but I watched my teammate win the first day on TV. I remember thinking, “That’s great. I want to be the best in the world and get on the victory stand.”

I want to impart the joys of judo

The first time I worked as a TV commentator was in 2018 at the Asia Games. I was also in charge of the audio guide for this year’s Tokyo World Judo Championships, which the All-Japan Judo Federation put on. I have been competing for a long time, and I wanted to do something new. I really enjoyed working in commentary. I got good feedback from those around me, too. I want to combine it with my educational activities and help spread the word about judo.

My parents would tell me, “Do as you like,” so I got to decide everything for myself. If my parents had made me do this, I would have had an escape route. “My parents made me do this, so …” Because it’s me that decided this, I feel the resolve and responsibility. Parents and teachers should give kids options and then watch over them. It’s not all about judo; you can do all sorts of other things. Then children will begin to like judo more.

The attraction of judo comes from the phrases Seiryoku Zenryo (using your body and spirit to your maximum ability) and Jita Kyoei (mutual prosperity), coined by the founder of judo, Jigoro Kano Sensei. It’s a sport because of the competitor you face, and the beauty of the sport comes from taking seriously the thoughtfulness, reverence, effort, and manners you show your opponent. It’s more about becoming stronger together than winning or losing. I want more people to learn to love judo with its amazing sports spirit. That is my goal now.