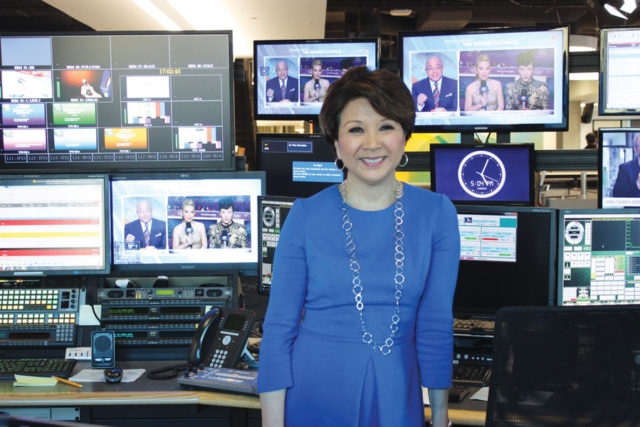 KING 5 news anchor Lori Matsukawa announced that she will retire from the station on June 14, ending an illustrious 36-year career.

“I always tell people the best part of being a television journalist is being able to tell the stories of the people who call the Northwest home,” Matsukawa said in announcing her retirement. “ Over the decades, I’ve witnessed a lot of change, most of it for the better. And what an honor it has been to write the ‘first draft of history,’ whether it was the eruption of Mount St. Helens, the attainment of redress by Japanese Americans unlawfully incarcerated during World War II or the inspiring achievements of a diverse group of public servants like Gary Locke, Norman and Constance Rice, Ana Mari Cauce, Ron Sims, Martha Choe, Mary Yu, Steve Gonzales and Claudia Kauffman.”

Matsukawa was first attracted to journalism when she was traveling the country as Miss Teenage America. After being interviewed numerous times, she thought, maybe that’s the career for me. And boy, was she right.

Matsukawa won many awards over her career  including the “Lifetime Achievement Award” from the Asian American Journalists Association (2005), induction into the University of Washington Communication Department’s “Alumni Hall of Fame” (2012), the NATAS Northwest “Silver Circle Award” for lifetime achievement (2014), and a regional Emmy Award in 2018 for her series “Prisoners in Their Own Land” about Japanese American wartime incarceration.

Beyond her television career, Matsukawa has worked tirelessly as a volunteer, serving as co-founder of the Japanese Cultural and Community Center in Washington and the Seattle chapter of the Asian American Journalists Association (which she established with Frank Abe in 1983) and a board member on many vital organizations such as the Asian Counseling and Referral Service, the Japanese American Citizens League, and the YMCA of Greater Seattle.

KING 5 plans to air a one-hour special sharing memories, photos, videos and stories about Matsukawa on Friday, June 14, from 7pm. “I am grateful to those who’ve been my teachers, mentors, and supporters all these years,” Matsukawa said in her retirement statement. “Thank you for your support. It’s been a heck of a ride!”