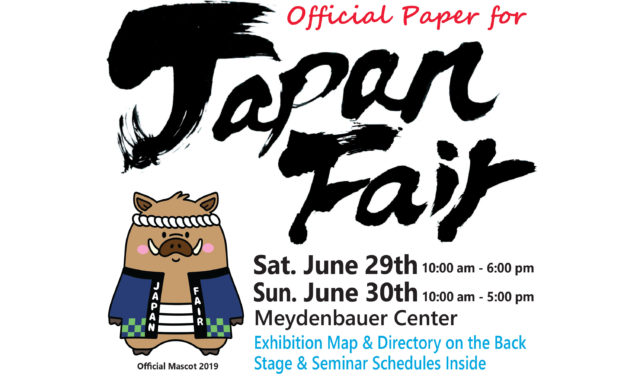 Japan Fair — a two-day celebration of Japanese art, culture, cuisine, and business — will come to Bellevue’s Meydenbauer Center on the last weekend of June. The annual festival is free and open to all (Parking at Meydenbauer Center is not free). This year’s fair will feature an Awa Odori dance lesson and contest, special guests from Japan, a marketplace, live performances, and a host of cultural workshops on everything from izakaya restaurants to manga translation. The festival is family friendly with plenty of activities for children and lots of festival food to try….

Read this article and check the main stage schedule……

Congratulations for another year of Japan Fair! Though only its fourth event, this festival has become a summer fixture for the greater Seattle area, welcoming all those interested in Japan.

In Japan, a new era “Reiwa” has dawned with the enthronement of the new Emperor Naruhito on May 1. So many things — from cars, airplanes, and artificial intelligence to “anime” and Japanese cuisine — connect Japan and Seattle, and our ties in these and other areas continue to strengthen across the Pacific Ocean. From April of this year, the number of direct flights connecting Japan and Seattle has doubled, and I hear that many of these flights are quite full, a sure sign that many people besides businessmen are travelling.

The growing interest in and warm feelings toward Japan among Americans are the result of the constant efforts made by all who bridge the two countries through business and friendly exchanges, including the Japanese Americans who preserved their cultural traditions in the Pacific Northwest for many years. I would like to say thank you to the organizers of Japan Fair for contributing so much to the friendship between people across the ocean.

We welcome each of you to join our mission to connect and bond not just Japan and America, but all the diverse communities we have here. While we reflect upon yesterday, appreciate today, and anticipate tomorrow, Japan Fair is bringing all those we are fortunate to have, under one big roof for two days, striving to make this community an even better place for future generations. We appreciate your support and participation, which makes it possible to host Japan Fair again this year.

We are excited to have 400 years of Awa Odori’s history, along with many others coming from Japan through the Necchu Schools.The new Era of Reiwa, hot Japanese cuisine from izakaya, history of Japanese Americans, kids area, tea ceremonies, bonsai, kimono, Japanese goods, educational seminars, and performances on the stage are for everyone. Cute characters are looking forward to seeing you all.

“A life of no regrets with Awa Odori”

The Gojyahei ren, or Awa Odori dance team, was formed in 1946. Hideaki Oka, the seventh-generation ren leader of the historic team that has danced the Awa Odori at the Expo 70 in Osaka in 1970 and the 80th birthday celebration for Emperor Akihito in 2014, will deliver a dance lesson at Japan Fair on June 29th. The following day, an Awa Odori dance contest will be held. Looking forward to this big weekend of events, we talked to Mr. Oka about the activities of Gojyahei and the deep meaning behind the Awa Odori. Read more……

Learn more about featured seminars and check the seminar schedule……

Learn more about the featured exhibitors……

Learn more about the documentaries and check the schedule……

Japan Fair is operated by a 501(c)(3) non-profit organization Asunaro and relies on donations and volunteers to pull off this massive annual undertaking. When you purchase a raffle ticket, Friends of Japan Gala ticket, and original event T-shirt, you are supporting the financing of next year’s Japan Fair.