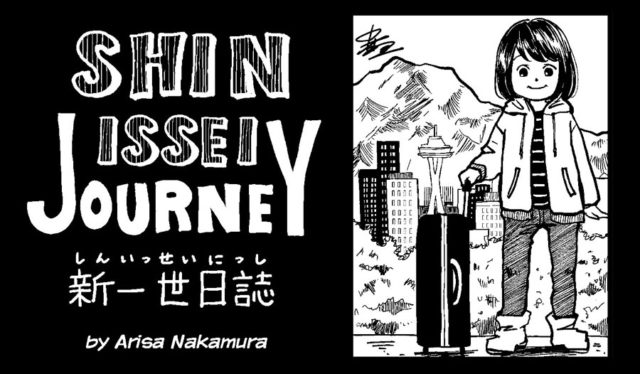 TODAY, we introduce a new comic strip, “Shin Issei Journey,” by local graphics artist Arisa Nakamura. In the series, Arisa will be sharing a fictionalized version of her experiences in the United States and in Seattle as a student-turned-immigrant from Japan. Arisa’s viewpoint is welcome, for the content of these English pages has largely reflected the views of writers from century-old Japanese American families. Thus, Arisa’s comic represents a perspective that is new and different. She reveals what natives cannot see.

WHO IS ARISA? Until now, readers have been viewing Arisa’s work unknowingly. She spent one day a week laying out these pages from April 2018 to August 2019. Before then, readers may remember Arisa from our article on her Japanese American Remembrance map (Mar. 2018). It is a pamphlet showing the locations of historical Japanese family businesses in the International District. Copies are available from the Japanese Cultural & Community Center of Washington (JCCCW), the Wing Luke Museum, and Klondike Gold Rush National Historical Park (Pioneer Square). She works at JCCCW.

THE BACKGROUND for Shin Issei Journey lies in the three waves of Japanese immigration that have washed these shores. At first, there were only the old immigrant families: the Issei, Nisei, and Sansei of mainstream Japanese American history. Next, there were the 50,000 Japanese “war brides” who arrived after meeting and marrying US servicemen during the Occupation of Japan that followed WWII. The children of these marriages form the core of the first widespread “hapa” generation on the US mainland. While Amazon overflows with more than ten thousand book or film titles on the Japanese American experience, sadly only about a dozen are listed for the war brides.

It is the contemporary third wave of Japanese immigration that forms the subject of Arisa’s comic. This wave began to arrive after the US Immigration and Nationality Act of 1965, which went into effect in 1968. The act made US immigration policy fairer. From that time, we began seeing gradually increasing numbers of varied new Japanese. These included professionals, business entrepreneurs, and many others, resulting in the need for a new word to distinguish these individuals from the earlier waves.

Thus the term, “Shin Issei” [new first-generation] came into use. It is appropriate, because most of the new immigrants don’t yet feel “Japanese American.” The latter connotes a lengthier, blended, pre-WWII history that doesn’t apply to them.

IN SHIN ISSEI JOURNEY, readers will recognize common elements with what the original Issei must have felt, with a present-day twist. Americans who have traveled to Japan or to other countries will also see themselves in Arisa’s drawings and thoughts. The sketches include the newcomer’s occasional moments of bewilderment. They also convey the “Aha” flashes of understanding that follow when she grasps that things are done differently in the new land.

A BRIEF OUTLINE of Arisa’s experiences in the US to date that lie behind Shin Issei Journey is in order. Arisa first came to the US as a 13-year-old student, when she and her family accompanied her father on a business assignment. She attended one year of public junior high school in St. Paul, Minnesota. Arisa remembers the experience of being the school’s only Japanese student as “really hard.”

Arisa later returned to the US again for a year as a university exchange student. Then, in a pattern common to eventual immigrants, Arisa returned a third time, to attend graduate school in Landscape Architecture at the UW. Her 2016 master’s thesis “Immigrant’s Sense of Belonging to Chinatown-International District, the Changing Neighborhood,” is available as an e-book to those with UW ID cards. It covers the feelings of rootedness of Japanese, Chinese, Filipinos, and Vietnamese to the community.

Today, by day, Arisa helps staff the front office of the JCCCW, where her main job is to do graphics design for all materials leaving that organization. At night and on weekends, Arisa draws in a contemporary style clearly influenced by anime.