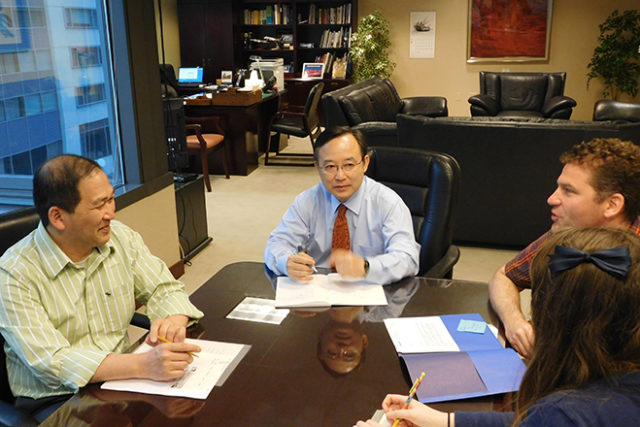 Yoichiro Yamada took over as the Consul General of Japan in Seattle last June. Through his public speeches, the picture of a family-oriented man and a nimble storyteller emerges. Perhaps because he is so approachable, he’s even got the beginnings of a fan club forming among his Japanese supporters. We wanted to get a glimpse of the Consul General’s personality by sitting down and talking to him.

Yoichiro Yamada – Born in Kobe and raised mostly in Kasuga, Saitama Prefecture. He received a bachelor’s degree (international relations, college of liberal arts) from the University of Tokyo in 1984 and a master’s degree (public administration) from Columbia University in 2004. He entered the Foreign Ministry in 1984 and has served
stints in Moscow, Brussels, Warsaw, New York and Nairobi, including stints as Minister to Kenya (2010-13) and Belgium (2013-2017). He transferred to his current position as Consul General in Seattle in June 2017. He is married and has a son. His hobbies include golf, Go, piano, reading, walking and opera.

“Giving Voice to the Voiceless:
Representing Expat Japanese
in Seattle”

When values change in a moment

Yoichiro Yamada’s natural voice comes out in his occasional “Through the Eyes of the Consul General” columns on the Consulate General of Japan in Seattle website. Since he moved to Seattle, he has visited many places and met all sorts of people, and he shares his impressions and what he has learned. “I want to learn as much as I can about the region to which I was appointed and meet as many people as I can,” he says. First, I
wanted to ask him about some of the experiences he has had as a diplomat working all over the world. He offered that there were three occasions that made him rethink his values. “Those moments when my values changed came when I thought I had something figured out, and then I suddenly realized that I really didn’t understand at all.”

“The first time was in Kenya,” Yamada recalls. “It is thought that the level of education in poverty-stricken Africa is low. But when I went there, I was surprised in many ways by the high levels being achieved. There are many talented people in Kenya.”

Yamada lived in Nairobi as Minister at the Embassy of Japan from 2010 to 2013. At that time, e-money payments via cellphone were spreading fast and wide through M-Pesa. The Economist wrote several times about the gamechanging idea of e-money that was happening in Kenya. “I wondered how such an advanced action could be achieved through a simple cellphone,” Yamada remembers. The average Kenyan speaks three languages fluently. The local tribal language is the mother tongue, and people learn Swahili and English at school. They learn all this in an educational environment where there are not enough textbooks or pencils. “The English vocabulary used in Kenyan newspapers was very advanced,” Yamada says. “People would read them, pass them on to others and have lively debates in common languages such as English or Swahili about politics or economics.” As the Japanese minister dispatched to Kenya, he worked to raise living and hygiene standards through international cooperation, but he also learned and received a lot. It was an awakening, as if the scales had fallen from his eyes.

The Consul General’s role is to connect people

Yamada had his sense of things upended in Seattle, too. “The first was the importance of Japanese Americans to the past and to the present in the region,” he says. In 2017, it was the 75th anniversary of the incarceration of Japanese Americans during World War II. As the Consul General in Seattle, he had many opportunities to look back on this period. “Japanese Americans had to fight the prejudice within the US while they tended to be seen by the Japanese as people who had abandoned Japan,” Yamada says. “But through effort and hard work, the Japanese Americans proved themselves to be model citizens and built status and trust. When I talk to politicians and military people in this region, many of them express deep respect for Japanese Americans and often refer to the soldiers of the 442nd as heroes.”

While Yamada knew about the history of incarceration, to actually live in the society that experienced it and talk with people who lived through it influenced him quite a bit. “The contributions of Japanese Americans are the basis of the trust that the average American expresses toward Japan,” he says.

The third incident in which he said his sense of things was upended was in Seattle when he heard about the troubles Japanese women faced. There are many cases where a Japanese woman divorces an American man and succumbs to terrible conditions out of fear of losing custody of her children. Life becomes very difficult for these women. In Washington State, the system dictates that assets and rights that were gained during the marriage are shared after the divorce. Yet, because the women don’t have enough information or aren’t fluent in English, they are forced into giving up their rights and experience an unfair divorce. “However, this sort of problem isn’t something people come across in daily life, and not something that we see in diplomatic work,” Yamada says. “These cases don’t become big news stories. But it’s important for the voiceless to be heard.” Consul General Yamada visited the state capital in Olympia many times to talk to Washington State politicians about this problem. “We definitely can’t build Japan-US relations by overlooking these instances of unfairness,” he says.

The role of Seattle’s Consul General

“I believe the Consul General’s role is to connect people,” Yamada says. “No matter how you try, you can’t achieve something big by yourself. The Consul General can be a bridge between those people who can exert great power.”

He says there is much for him to do as Consul General in Seattle. “There are many people who are trying things and engaged in projects on an individual level. If those people come to me for help, I will try to help. I have good relations with politicians and government officials, so I can connect a private company, say, to the right people to expand their project and smooth out their business.”

Are there specific sectors he is concentrating on? “I don’t know Seattle that well myself yet, so I think it will be more effective for me to respond to people looking for solutions,” he responds.

“Culture and the economy are very important areas for the Consulate,” he adds. “I hope to help increase trust and deepen relationships between Japan and my jurisdiction in the state of Washington and Montana states, helping people come and go and have dealings with each other. Our office covers these states.” His office works to be a bridge for investments and business, helps to get young Americans to work in Japanese schools through the JET Program, introduces Japanese culture, and supports sister city relationships.

He mentions that his second priority is to protect the interests of the Japanese. “Support of Japanese people is an important part of our work. The divorced Japanese women whom I mentioned earlier are a case in point. We do not assist people by directly giving people money. Instead, we can offer information, raise social awareness, and help by negotiating with politicians. If there are destitute Japanese people, we think of how we can help, and then do what we can.”

Third, the Consul General must provide public relations for Japanese government policies. “The Consulate does not engage in diplomatic negotiations, but it’s important to help people understand Japan’s stance and its policies,” Yamada says. “When there is the chance, we explain Japan’s stance on supporting developing countries through international cooperation, or what actions we are taking to combat global warming, or our views on territorial disputes, for example.”

A glimpse into civilization’s future

How does the Consul General view Seattle? “In a word, it’s a wonderful city. I think it is a very open-minded place.” Being geographically close to East Asia, Seattle was the first port of call for the Hikawa Maru. Seattle also resisted the Trump administration’s immigration restrictions by filing a lawsuit. “This is also a place where we can see what future civilization will look like,” the Consul General says. People in Japan’s high-tech industries are interested in this city with Microsoft, Amazon and other global high-tech firms at its core. “It’s a dynamic city where one can learn a lot,” Yamada says.

Yamada is the sort of person who will enjoy living wherever his work leads him. “However, that’s not necessarily so for my family; there are easy and difficult places to live. Seattle is similar to living in Japan or perhaps even more comfortable. On an individual level, people are gentle and kind.”

Where does Yamada like to go when he has time off? “I don’t get out very often, but lately I’ve been visiting Discovery Park in Magnolia. It’s about 15 minutes from our home. There is a forest and a beach. No matter how long I spend there, I don’t get bored.”

Consul General Yamada comes off as a quiet and modest person. But he is talkative, warm and affable. He looks like a person who takes care of his career and family, enjoys life and is a success both in name and substance. Out of the blue, I asked him about his policy for living. He thought for a moment, then answered in a decisive tone.

“As you go through life, you come across different situations and you make choices. When I encounter a choice which may make me feel ashamed later on, I don’t choose it. When I see something that shouldn’t be left unattended, I’ll say so and try not to turn a blind eye. Whether it goes well or not or whether my actions will be received well or not, I try at least to bring it to the attention of people who can make a difference, though at times, that may irritate or even anger certain persons,” Yamada says in a gentle tone that belies his willingness to confront people when necessary.

“There is no need to say things emotionally. But when something seems wrong, it’s important for a person to be able to say that. Because people didn’t speak out earlier, Japan was led down the path to war. Today, the human rights violations happening across the globe happen because there is an environment where it is difficult to speak out. What is good or bad can be relative, but I believe that a society or organization where people can’t speak their mind loses its vitality.” Perhaps Yamada’s attractive humanity is one reason a fan club has formed.

Finally, Yamada had a message for the Japanese American community in Seattle. “Because of the patient efforts and hard work of the Japanese Americans, Japan has come to be trusted in the US and Japan-US relations have improved. We should really understand this, but it is not well known to Japan-born Japanese. I would like to make their story more widely known in Japan. Besides, there is a growing interest in things Japanese in Seattle, and I would like to help to expand this wave. Not just traditional culture, but also things like cosplay, so that people of all generations can enjoy something about Japan. ”

Read this article in Japanese：