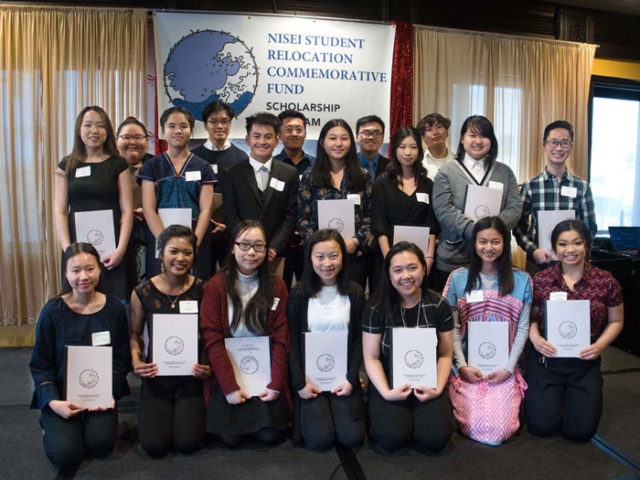 “They were at a picnic in New Hampshire,” says Jean Hibino. Her Nisei parents were UC Berkeley students during World War II, and though they were imprisoned at Tanforan and then Topaz, their time in camp was brief. Thanks to the National Japanese American Student Relocation Council, which operated from 1942 to 1946, Hibino’s parents and close to 3600 other Nisei college students were able to leave camp in order to finish their college education, many in the Midwest and on the East Coast. Eventually the Hibinos found “other Japanese American expats” on the East Coast, as Hibino calls them, and they began to socialize regularly.

In the late 1970s, Hibino’s mother had attended a JACL conference in San Francisco, and had returned with a charge for her local community: What should the Nisei be doing in their retirement? “They said, ‘We’re too young to be thinking about retirement,’” laughs Hibino now. “And they were saying, ‘besides socializing, what can we do more seriously?’” She asked her friends at their annual picnic. A scholarship fund, was the answer.

On the East Coast, Jean’s mother began to look for contacts who might consider giving to such a fund. “My mom first did it by going through her phone books in Boston for all Japanese American names,” Hibino says. “That’s how word got out when she started. She was a force of nature.” Hibino’s mother would eventually go through all of her contacts throughout the United States. She found notable Nisei alumni who had received assistance from the original wartime fund, including Warren Marutani and Michi Nishiura Weglyn, and the Fund’s website—itself an important archive of Japanese American history and cross-cultural solidarity—now highlights testimony from these two important figures.

The NSRCF began in 1979 with $153 in its original application for nonprofit status. In 2020, the NSRCF is celebrating 40 years of giving, supporting over 1000 students through more than $1 million in scholarships. Only 8% of donations go towards operating costs, while the remainder of donations goes into the scholarship funds. The Fund operates solely on volunteer efforts, with 12 board members whose representation includes 3 generations of Japanese Americans, from the original Nisei founders to the descendants who are 3rd and 4th generation. Nisei board member Yutaka Kobayashi donated his redress compensation check to the fund.

The NSRCF website describes this Board’s motivation in some detail:

When asked why they continue these efforts, NSRCF board members and supporters often speak of the need they feel to recognize the help Japanese Americans received during the war. In Japanese, this strong sense of obligation is referred to as ongaeshi. On is an obligation one incurs to another person who gives generous, unselfish assistance in a time of one’s need. On binds the giver and the receiver in an unbreakable relationship that is not to be forgotten. The feeling of on compels a receiver to return what has been received. Ongaeshi is the repayment of on. It is experienced as a moral imperative, and when linked to a sense of gratitude, is also a source of joy.

The Fund travels to different parts of the United States each year, and has traveled to Chicago, Sacramento, Los Angeles, Minneapolis. The board members work with a local team of scholarship committee volunteers to read applications—sometimes hundreds— and hold an awards ceremony in the community. A repeat visit to the Seattle area is next in 2020.

Jean Hibino joined the Fund in 1992 and now serves as the Board’s Executive Secretary. “I joined it to work with my parents,” she says now, “and especially my mother. I wanted to get to know my mother as ‘more than just Ma.’” The two were able to work closely together for six years before her mother passed away, and Hibino is now celebrating 27 years of service on the Board. Her daughter Laura Misumi also serves on the Board.

Over the years, the Fund has faced a few challenges. First and foremost, the challenge has been sustainability in funding. Though the Fund is run entirely by volunteers, to maintain a record of giving over decades has been difficult. They only send one annual newsletter and one appeal letter, usually written by a member of the Board or a recipient. Donations are always welcome, and the Fund plans to continue operating “as long as we can,” says Hibino.

Another challenge that the Fund occasionally faces is opposition from Japanese Americans, who question the Fund’s decision to prioritize Southeast Asian or other minority communities that are not Japanese American. Others, like longtime supporter and former board member Linda Ando, find the motivation to support other minority communities as a praiseworthy act. “It’s impressive, what they’ve been able to do,” she says. Jean is proud of the Fund’s latest class of recipients, which included the Somali community in Minneapolis, Minnesota for the first time. “We worked with CAIR (Council of American-Islamic Relations), with JACL, and others,” she says. “There were already reasons to work together after 9/11, after the Muslim ban, and so on.”

Hibino is grateful to recipients like Phuoc V. Le, who “really understand what we’re trying to do,” she says. A former boat refugee from Vietnam, Le has not only stayed in touch with the board with news of his successful professional career, but has also “paid it forward” by serving on the Board briefly and by helping to write the annual appeal letter occasionally.

“Part of what we’re looking for,” Hibino says, “is the spirit of giving, and giving back.”

Applications for the Seattle area scholarships open in January 2020. More information on the scholarships and donations to the Nisei Student Relocation Commemorative Fund is available here: www.nsrcfund.org.

This essay was written in honor of Seattle Nikkei activist Linda Ando, who connected me with the work of the Fund. Linda’s support of my work and writing has been consistent, heartfelt, and priceless. Okagesama de.

[Editor’s Note] This article was originally published in Discover Nikkei at <www.discovernikkei.org>, which is managed by the Japanese American National Museum in Los Angeles.

Tamiko Nimura is a Sansei/Pinay writer, originally from Northern California and now living in the Pacific Northwest. Her writing has appeared or will appear in The San Francisco Chronicle, Kartika Review, The Seattle Star, Seattlest.com, the International Examiner (Seattle), and The Rafu Shimpo. She blogs at Kikugirl.net, and is working on a book project that responds to her father’s unpublished manuscript about his Tule Lake incarceration during WW II.

Fighting Fear on the Day of Remembrance