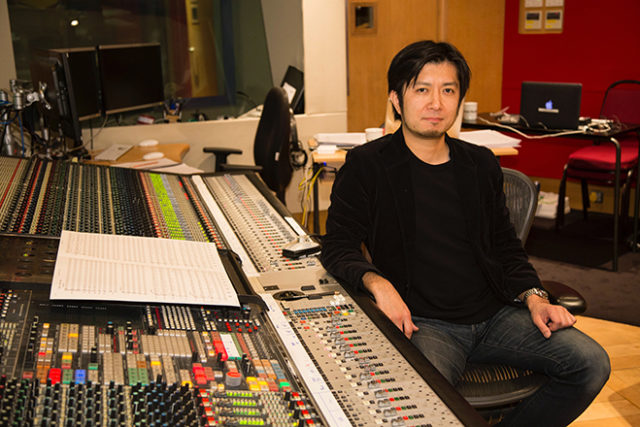 The mega-hit Xbox series Halo is known for its high-quality music, which helps create the games’ fictional worlds. Kazuma Jinnouchi, headhunted by Microsoft in 2011, is the composer for the soundtracks on Halo 4 and Halo 5: Guardians. This summer, he finally decided to go independent. Since childhood, Jinnouchi has focused on following his passions. What sort of life choices did he make to end up as a music composer?

There comes a moment when I think
‘that’s it’ with the music I am composing.
That’s when I know I’ve done a good job.”

It all starts with music and a computer

Jinnouchi left Microsoft in July. As soon as he went freelance, he got involved with a Japanese TV series and a film based in Los Angeles. He’s busy every day.

“Having been in a company mainly doing video game soundtracks up until now, I thought that going independent would allow me to try all sorts of new projects,” he says. He gives off the aura of a composer with artisan spirit, but at the same time is friendly and easy to talk to. “First, I want to make sure I have a steady income and have a solid foundation for my life,” he says with a smile. He has several video-game projects lined up, so he’s off
to a steady start with his freelance career.

For Jinnouchi, everything began with music and a computer. His first encounter with musical instruments was telling. He remembers being drawn to sounds in kindergarten. He was taken by the sound of a piano his teacher played. He told his parents that he wanted to learn how to play, but they decided a piano was just too big to fit in their house. In third grade, he was taken by the sound of a flute. That time, his parents were ok with buying a flute. He began to learn how to play flute. When he advanced to Berklee, he specialized in guitar, but the guitar was never his first choice.

“When I was in middle school, I wanted Famicon,” he remembers. “When I asked my parents for one, they gave me a computer instead and told me to make my own games. I went to the library to borrow a book on programming and created a game-like thing. But my game paled in comparison to the Famicon games. When I compared the two, I realized my game didn’t have any sound. That’s when I decided to compose music for the game I made.”

He decided a guitar would be handy for playing chords. The flute provided the melody and the guitar the chords. Then he created rhythm for the first time on a computer. He was 15. From that point on, he kept playing the guitar and listening to all sorts of music. The young Jinnouchi’s interests jumped from video games to music.

Jinnouchi graduated from the Berklee College of Music, renowned for its jazz and contemporary music. He was in the same class as jazz pianist Hiromi Uehara and remains friends with her. “In college, I composed in funk/fusion style. There were compositions where I imagined a landscape and added things like the feeling of wind. The fusion band The Yellow jackets was formed in the 1980s, and I found the structure of their songs fascinating,” Jinnouchi recalls. “I thought, I’d love to be able to write music like that.”

No matter how prestigious the school one graduates from, it’s still very difficult to make a living in music. For a while after graduating, he worked at whatever jobs he could find. “I wanted to make music for commercials, so I went to Tokyo. First, I worked part time at a long-established production company in Aoyama, Tokyo. While I took care of office odds and ends, at times I would get to make sample sound sources for the composers. The creative aspects of the work were interesting, but when my trial period was up, they asked me what I wanted to do next. ‘I want to compose,’ I replied. The answer: ‘Well, then today is your last day. Thanks for your time.’ That was Christmas night,” he says with a bitter smile.

He began calling everyone he could think of in search of work. He worked as a localizer and on user support for Sibelius, the music notation software used by many composers. He worked in that job for three years until one day, a phone call turned his world around.

A classmate from his Berklee College of Music days, Nobuko Toda, was working as a composer and music producer for Konami Digital Entertainment. She wanted him to join a new team in the company to produce music for a video game. “At first, I declined,” Jinnouchi recalls. “Everything I had learned and all my work experience to that point had nothing to do with music composition for video games. I didn’t have the confidence that I could keep up. But Toda told me, ‘We can teach you our process of making music and the production process; you’ll be fine. What’s important is whether you can compose good music or not. Your music, with its visual detail, is suited to video games. I’m sure you’ll succeed.’ I had never heard my own music be so highly rated by anyone. I figured I should give it a try. Plus, I figured, if my demo was no good, they’d let me go.” Jinnouchi took full advantage of the opportunity. There was some discussion about whether they should hire him, but in the end, the company extended a job offer, thus starting his career as a video-game composer.

The true reason for becoming a composer

Basically, he found that what he imagined in a composition and what was needed in a video-game music composition were very different. “Up until then, I was aiming for compositions that were comfortable to listen to,” Jinnouchi says. “But video-game compositions are caught up in psychological effects. What first comes to mind is the feeling of speed. Music is about tempo. In a game, in whatever situation, there’s a sense of speed. Depending on the music you use, you can control the player and make him hurry up.”

What is it about Jinnouchi’s music that goes above and beyond the ordinary? “I’ve been praised by directors for my interpretation. When you add music to video or an experience, first you have to figure out how to interpret the scene,” he says. “For me, that’s an ongoing challenge, but there comes a moment when I think ‘that’s it’ with the music I am composing. That’s when I know I’ve done a good job.”

Jinnouchi shared an interesting story about interpreting video. In a college course, the students would first watch video with no sound. A young couple comes dashing out of a house and drives away in a car. An elderly man looks out the window at them and laughs. The young music composition students were then told to put music to the scene to give it meaning. One student set it to a lovely song to tell the story of a young couple eloping, while the all-knowing father figure looked out the window pretending he doesn’t know their plans. Another student used suspenseful music, and after the car peeled away, the sound of an explosion. Then the elderly man showed his smiling face. This anecdote shows clearly how much influence music has on setting the tone for a scene.

Jinnouchi didn’t systematically study visual interpretation at school. Instead he learned on the job while working on video-game music. As he gained experience, he discovered that if he made music a certain way, it would bring out different emotions. If you use this sound in this situation, this is how the viewer will feel. He began to store these different audio experiences. Through these video interpretations, he formed his individual approach to composition.

“I have recurring memories whenever I hear the music for Xbox’s Halo. We had a great team for the production. Halo 4 was my first assignment when I joined the company. It was the first time for me to have a composition recorded by an orchestra, and there were so many things about the process that were special,” Jinnouchi says. He was brought to Seattle by his former Konami boss, Sotaro Tojima, who had become the audio director for Halo.

“The game-audio community is great in a city like Seattle known for its video game industry,” he says. “It’s a community of people who are involved in production of video-game music. There’s strangely no rivalry with others in rival companies. Everyone is supportive. We take the horizontal connections seriously. And we become friends and go out for drinks.”

Jinnouchi likes hanging with his music friends, having drinks and talking shop about the latest musical equipment. “I don’t drink much at home, so after the family is asleep, I drink with friends in my neighborhood,” Jinnouchi says. “They’re in the same industry, graduates of Berklee and really brilliant young people. They know all about musical equipment. Once a month, we drink beer at a home studio and make music together.”

It’s an ideal career when one can spend time researching the things one likes. “Since childhood, like a fool with one thought, I’ve been doing the same thing over and over,” Jinnouchi says. “Now I plan to try some new things. As I continue to discover new things, it will deepen my interest, release my adrenaline and I’ll be addicted all over again. There are projects I’d like to work on in the future, but I’d also like to be able to work with certain people now.”

The game-audio community is great in a city
like Seattle known for its video game industry.

Kazuma Jinnouchi Born in Hiroshima, he graduated from the
Berklee College of Music in 2003 with a major in Contemporary Writing and Production. In 2006, he turned his attention to music for film and TV, creating the music for the Metal Gear Solid series, one of the most famous video game franchises by Konami Digital Entertainment in Tokyo. In 2011, he joined Microsoft’s 343 Industries in Redmond and took charge of the music for the Halo series. This July, he went
independent and works as a freelancer on game, film, and TV series soundtracks.
Website: www.kazumajinnouchi.com

*This article was written in Summer 2018. Jinnouchi moved his studio to Los Angeles in November to join a movie soundtrack project.

Sake evangelists in Seattle & Return to Traditional as a New...