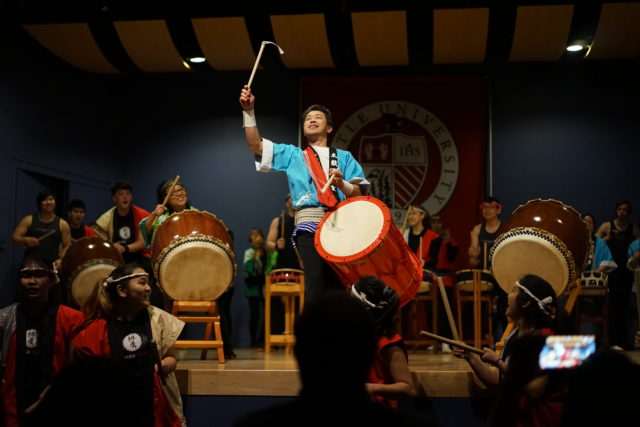 President’s Day marked the 76th anniversary of EO 9066, an executive order signed by Franklin D. Roosevelt in 1942 after the Pearl Harbor bombing that triggered the mass incarceration of Japanese people along the west coast at the height of World War II.

The Minidoka Pilgrimage Planning Committee, along with Seattle University’s International Student Center and other sponsors, hosted the annual Day of Remembrance Taiko Concert on Sunday, February 18. Each year this event is held to educate people on the Japanese and Japanese-American experience, to bring the Nikkei community together and to raise money for youth scholarships which pay for travel expenses to the annual Minidoka Pilgrimage.

Before attendants moved into an auditorium for the concert, they enjoyed hot coffee and donuts as they perused displays full of books and photographs that provided information and historical context surrounding the mass incarceration of Japanese and Japanese-American people during the war. These displays included “Meet Me at Higo” and photographs from past Pilgrimages, among other things.

“In 1942, a community was targeted, not because they were guilty of anything,” said Dale Watanabe, an executive member of MPPC and Interim Director of the ISC. “I hope and pray that in 2018 that we will not see similar injustices happen again.”

The main performances included passionate, thunderous performances from regional taiko groups including Seattle University Hidako Taiko, Northwest Taiko, School of Taiko, Seattle Matsuri Taiko, Inochi Taiko and Dekoboko Taiko, among others. Speeches were made by Dale Watanabe, spoken word poet Troy Osaki and Jorge Alvarado, a recipient of the Deffered Action for Childhood Arrivals program, or DACA, who spoke about the parallels that can be drawn between the struggles of Japanese-Americans during WWII and his own.

“We are seeing signs of our youth being more vocal,” Watanabe said. “The time is now. Enough is enough. In 2018, I would like to echo: let it not happen again.”