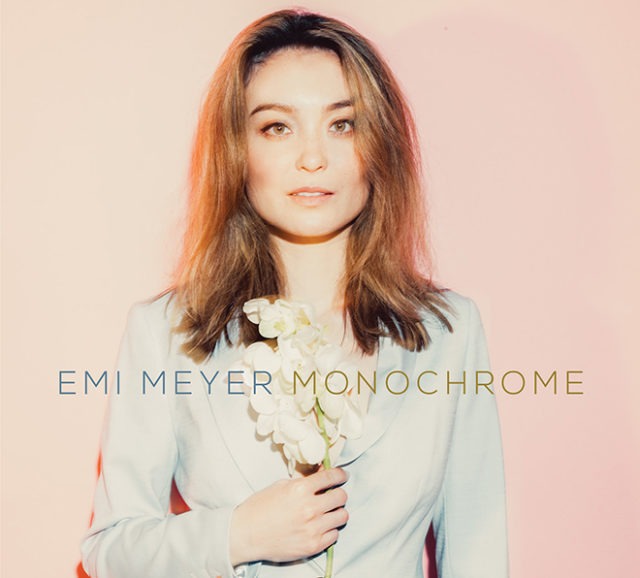 Tokyo-based singer/songwriter Emi Meyer released her first U.S. album Monochrome in September with Origin Records, a Seattle-based jazz and classical music record label. For her debut U.S. recording, Emi combines music from a set recorded in Paris with Belgian pianist Eric Legnini’s French quartet, and new originals recorded in Seattle and featuring guitarist Dan Balmer and pianist Dawn Clement. Born to a Japanese mother and American father, Emi spent her childhood in Seattle. Emi has carved out a wide-ranging career in Japan with her songs featured in TV, movies and advertising. The Post had a chance to interview Emi in downtown Bellevue.

Tell me about your new album.

Monochrome went on sale in 2015 in Japan, South Korea and Thailand. There are original songs like “Monochrome” and “If I Think of You” and some jazz standards. For the North American market, I removed the jazz standards and focused on my original songs. With new songs like “Odyssey,” “Para’so” and “Flesh and Bones,” I collaborate with local musicians such as record label founder and drummer John Bishop.

John’s been my mentor ever since he taught at a jazz camp I attended during middle and high school. For a long time, all I wanted was to put out an album from a long-established indie label.

We recorded the new songs at (Microsoft co-founder) Paul Allen’s studio. He has amazing equipment, and he is very supportive of local jazz musicians. Seattle is changing every day, but it’s nice to see that we still have that supportive local community here.

What’s it like living in Tokyo and Seattle as a jazz musician?

I learned classical piano when I was a child. When I was in middle school, I heard the jazz band was looking for a pianist. When I tried out, that was my introduction to the jazz world. Classical and jazz piano are very different, so it was confusing at first. For example, jazz doesn’t have the detailed sheet music we use in classical music. Being able to ad lib is important. I was able to surround myself with wonderful jazz mentors here in Seattle.

My mother is Japanese. I was raised in Seattle, so my English is stronger than my Japanese. I prefer to write songs in English. When I sing in English, I naturally put my emotions into it, and each word is delivered to the audience with authority. I enunciate as I sing. It’s the opposite when I sing in Japanese. If I worry too much about pronunciation, my emotion doesn’t come across. So I don’t worry about enunciating and concentrate on the emotion.

My parents live in Seattle, so I often come to visit. Whenever I visit, there are new stores to see and restaurants to try. I like walking around Green Lake. But my favorite thing to do is play the grand piano in my parents’ house. In Tokyo, all I have is a keyboard.
Tokyo is filled with people, and there are lots of live music venues. I can perform shows every week and not get worn down. Each time is different thanks to the audience, the atmosphere of the venue, the accompanying musicians. There are musicians from all over the world.

You are expecting a baby. Do you think becoming a mom will change your music?

I’ll become a mom soon. Everyone is telling me my life is about to change. (laughs) I can’t even imagine how it will all change. But now, when I sing and play the piano, I have the feeling that I’m playing for that baby inside me.

In September, I recorded my next album in Nashville. I included a lullaby for my soon-to-be-born child. In these last few months, my baby has been forming ears. It gives me a strange feeling to think that my baby is hearing music for the first time. Nashville is a conservative place that puts emphasis on the family. There are lots of artists who are raising children. They even bring their family to the studio. In Tokyo or New York, recording is often done at night. In Nashville, it’s typically done in the middle of the day. It was refreshing to see that recording would often end by 3pm, when the kids get out of school.

The next album will come out at a leisurely pace sometime next summer. I will continue my event and commercial work, but there is nothing more important to me right now than finding some time to concentrate on writing lyrics and songs.

INTERVIEW: Japanese expats in Seattle discuss their jobs in America