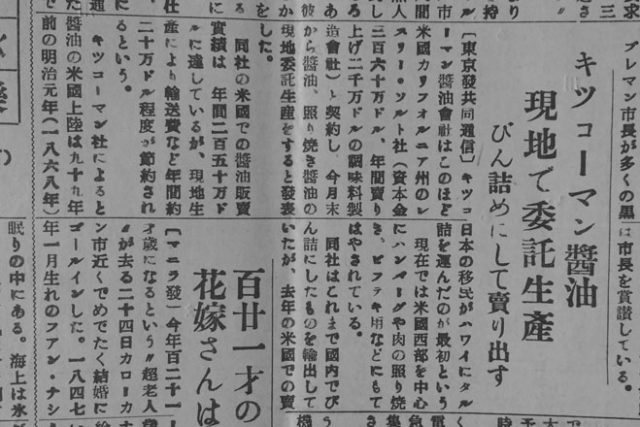 From Tokyo: the Kikkoman Corporation signed a manufacturing contract with Leslie Salt Company, which produces seasonings based in California, to sell soy sauce and teriyaki sauce to U.S. customers.

Kikkoman’s soy sauce sales in the United States have reached $2.5 million annually and the new contract will be expected to reduce a $200,000 annual  expense including shipping costs.

According to Kikkoman, the first arrival of soy sauce to the United States was in 1868 when Japanese immigrants brought it in a barrel to Hawaii.

The sauce has been very popular in the States, mainly the West Coast, for use in hamburger, beef teriyaki and beef steak.

The company has exported the bottled soy sauce produced in Japan but decided on this manufacturing contract after experiencing great sales last year. To cut the increasing shipping costs, the company will send a 55-gallon barrel of soy sauce to the Leslie Salt Company, which will repack it in bottles for sale.