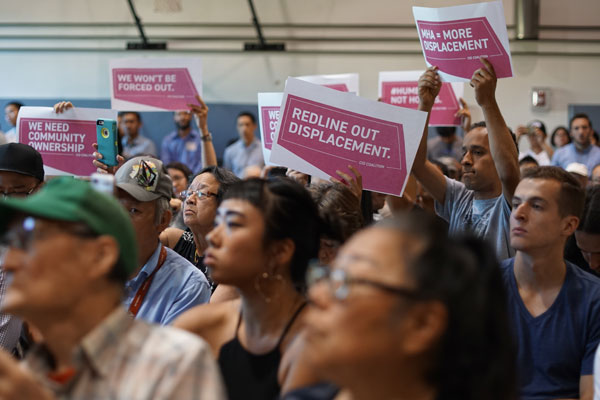 Nisei Veterans Hall in the Little Saigon neighborhood of the International District (ID) was filled with community members joining a Town Hall meeting on the evening of July 18th. The City Council is expected to vote later this month on passing Mandatory Housing Affordability (MHA) that would change zoning codes in the ID and enable higher buildings to be built in the neighborhood. Inter’Im Community Development Association (Inter’Im CDA) arranged the meeting in order to make sure the community voices are heard by council members prior to the vote. As the up-zoning would attract new developments in the neighborhood, existing residents and small business owners are concerned about displacement and gentrification risks such as higher rents pushing existing community members away.
Five of the nine city council members — Rob Johnson, Lorena Gonzales, Bruce Harrell, Lisa Herbold, and Mike O’Brien — attended. The meeting started with an overview by the city’s Office of Planning and Community Development of the proposed MHA and zoning changes. The office emphasized the importance of MHA. Gary Johnson from the planning office highlighted the city’s community engagement in the neighborhood, including programs for public safety, pedestrian environment and affordable housings.
Inter’Im’s presentation followed the city’s overview. Inter’Im explained its approach of “community driven strategies to minimize the risk of economic, cultural, and commercial displacement.” Tom Im of Inter’Im stated that MHA legislation “does not do enough to address the development pressure and associated displacement fears that the neighborhood is facing right now.” He implored the city council to take action to save “grandmas and grandpas living in this neighborhood and family businesses that have been in the ID for generations.” According to Leslie Morishita of Inter’Im, the ID is “home to some 36,000 residents and over 425 small businesses.” She explained that the ID has been serving as “first home for newly arriving immigrants and refugees, as well as long-time home for limited English-speaking families and elders.” Today, most ID residents are low-income elderly.
After the presentations, public comments continued for more than two hours. Many were frustrated with the lack of public engagement by the city in regards to the recently opened homeless center in Little Saigon, as well as the MHA legislation. A woman who lives in the neighborhood said she is “concerned that drugs and alcohol are permitted” and “people with opiate addiction will reside” in the Navigation Center Shelter. Another women who calls Little Saigon home questioned “what percentage of the people here can really afford the affordable housings” after the MHA acts.

Bruce Harell will not seek re-election