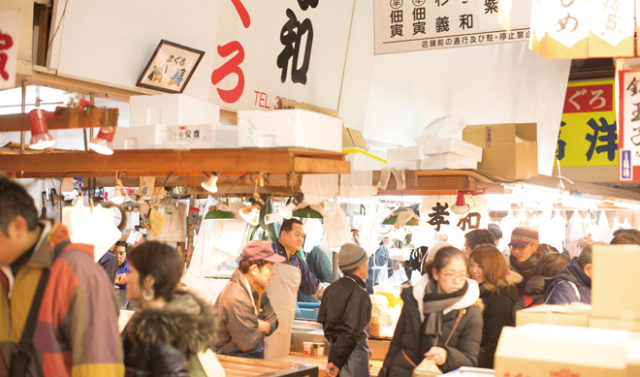 The world-premiere of the documentary “Tsukiji Wonderland,” featuring the world’s biggest wholesale market located in Tokyo, was shown in the Seattle International Film Festival. In the May 31 showing, audiences lined up in front of the theater to fill the 220 seats. Film Director Naotaro Endo and producers Okuda Kazuha and Maiko Teshima and Harvard University professor Theodore C. Bestor joined the Q and A session after the screening and spoke about the background of the film.

Since washoku, traditional Japanese cuisine, was listed in the UNESCO’s Intangible Cultural Heritage, Japanese food has gained increased attention from around the world. Since fish is traditionally the center of Japanese food culture, the Tokyo Metropolitan Central Wholesale Market, known as Tsukiji, has maintained that aspect of its culture since pre-World War II.

Things like the way the auction is conducted attracts many foreign tourists to go and experience Tsukiji’s unique culture. The Tuna Auction is especially popular, though the tour starts at 5 a.m.
Tsukiji ranked as the world’s biggest marine products dealership. According to last year’s data, about 1,600 tons of marine products were transported in a day, which cost about $15 million.
“Tsukiji is not number one but only one,” said one of interviewees in the film.
“Tsukiji Wonderland” mainly focuses on an intermediate wholesaler in Tsukiji that was planned to close this November to move to their new location in Toyosu.
Aside from the stereotype of marine products that it is all about freshness, the fish pass through many processes before sales. Each process, such as the way the fish are caught, transported, scaled and gutted, influences fish quality depending on how much effort is spent at each interval.

After all these processes, intermediate wholesalers buy the fish in the auction and fillet it before selling to the retail stores. Between suppliers and customers, intermediates’ professions really matter.
“Market is just a place,” said director Endo. “What makes Tsukiji is people, who are working there.”
“Customers see those workers and buy rather than seeing fishes themselves,” he added. About 70 workers on the screen show the relationship at work is not about benefit but trust.

Trust between the filming crew and Tsukiji workers was necessary as well for this filming project. No one had ever tried such a long term filming before so it took almost one year to be authorized. Even after beginning the filming, many unexpected happenings came every day through each of the four seasons, but the unique Japanese food culture “Shun” was successfully reflected in the film.

The World-famous chef and scholars also cast in the movie shared their “For Tsukiji” thoughts. Such trust and strong relationships are indicated in the ethics and pride Tsukiji people still have in this modern society.

The modern Japanese diet style has dramatically changed in recent days with less time for cooking and even for eating. Many households grow apart from fish dishes, which usually take time to prepare.

The market relocation this year has also been facing multiple issues including the retail costs. In March, about 500 Tsukiji workers demonstrated in front of the building of the Japanese Ministry of Agriculture.
“Twenty years later, there might be a generation, which doesn’t know about Tsukiji,” said Endo.

Opened in 1935, the Tsukiji market just marked 80 years of its history, so “Tsukiji Wonderland” can be a record of people who worked behind the scenes.
The film will be shown at several occasions including the San Sebastian International Film Festival in Spain in September and in various Asian countries.

From Yotsuya to Shinjuku 6