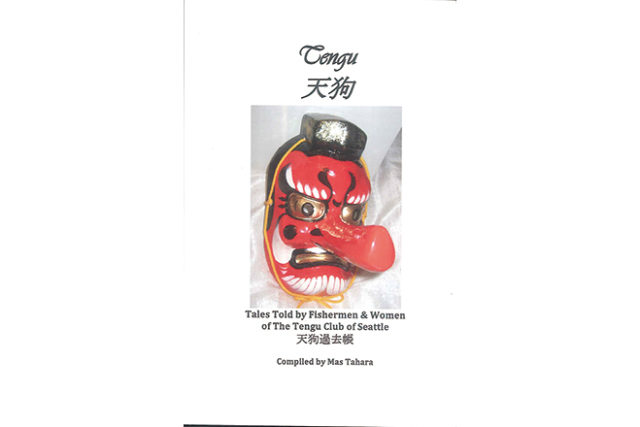 At the beginning of 2012, I started writing a book, tentatively titled “The Book on Tengu Club.”

After joining the club and fishing for winter chinook salmon with the members of the Tengu Club of Seattle for nearly 50 years, I realized that I have accumulated a nearly four feet high pile of documents, notebooks, binders, photos and newspaper clippings. It took me four years to finish the project, with so many people coming up with valuable information, photos and items.

As I continued to gather information and spend time doing research, I realized that salmon fishing was the most popular sports activity among Nikkei in this area in terms of longevity and the number of participants.

When the book was about 80% done, I asked the Japanese Community Service of Seattle (JCS, Seattle Nikkeijin Kai) to be the publisher and accept this project as their own with the stipulation that it would not cost JCS any expense.

The Kawabe Memorial Foundation very generously funded the cost of publishing the Book.
Two-hundred copies of “Tengu – Tales Told by Fishermen and Women of The Tengu Club of Seattle” were delivered to JCS last January. The JCS initially planned to sell the book for $20 each but decided otherwise.

Therefore, with the understanding of the JCS Board of Directors, I decided to distribute the copies free of charge.

Since the number of copies is limited, the people whose names appear in the Acknowledgement and Index pages will have priorities to receive the gift from JCS.

Others who wish to receive the book may contact me (E-mail: taharas@comcast.net; Tel:206.361-2970 or Cell: 206.604-2542) or attend a book-signing event hosted by Tomio Moriguchi of the Hokubei Hochi Foundation and this paper, tentatively on June 18 at Nagomi Teahouse. The event will start at 1 p.m, and further details will also be announced next week.

The event will be open to public with a questions and answer session, video screening and book signing.