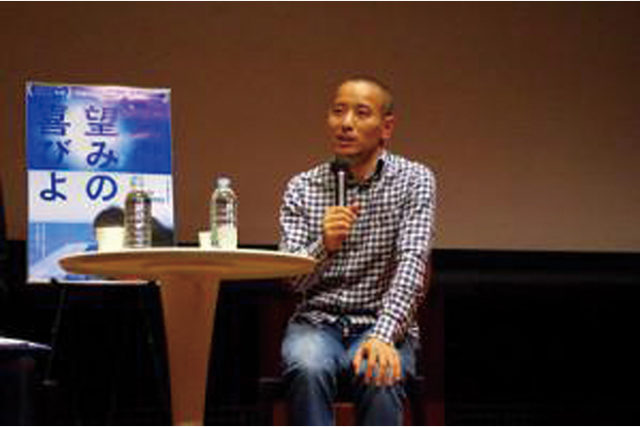 On March 10, the Japanese film “Joy Of Man’s Desiring” will be screened at SIFF Film Center. Film Director Masakazu Sugita answered several questions in anticipation of the event, which he will attend.

How did you start filming “Joy Of Man’s Desiring”?

Sugita: “I began talking with Mr. Miyoshi, who is a producer for this film, about making some kind of film at the beginning of Spring 2012. We hadn’t decided on a theme yet so I listed some ideas and one of them was the story of orphaned children after a big earthquake.

At the time, TV news stations were still showing ruined places and people affected by the earthquake in Tohoku on March 11 in 2011. These scenes made me feel like there was a “long distance of feeling” between people who live in Tohoku and me; those who cannot go back to their regular routines and live normally. Also, they reminded me of the memory of the Great Hanshin Awaji Earthquake in 1995.

When the Great Hanshin Awaji Earthquake occurred, I was only 14 years old and lived in Hyogo Prefecture, the epicenter of the earthquake. It didn’t affect me as much as others. My house wasn’t damaged, school re-started in one month and I had my usual school life back in six months. On the other hand, some homeless people were taking shelter in my junior high school. Some of them couldn’t get their back to their lives even after I graduated from junior high school. I didn’t help those people even though I recognized that I might be able to do something for them. Now, I can explain my feelings at the time; I regret that I didn’t try to help them. Therefore, I think these experiences inspired me to contribute something by making this film.”

This film was screened in the Berlin International Film Festival’s “Generation Section” before it was shown in Japan. Why did you choose to present it this way?

“As we were finishing the film, I approached the Berlin International Film Festival. The application deadline was nearly closed, but I picked three other sections to apply to through the website. But the Generation Section, judged by children under the age of 15, offered me a nomination.

It was several years later that I realized how difficult it was to be nominated through the website. I heard that almost nothing makes it through the online application process. One judge must have loved the film and pushed for its nomination.”

How has the audience reacted toward this film?

“The audience at the Berlin International Film Festival was impressed. Although I had been thinking that I wanted a lot of people to watch this film, I was always worried about how children would react to such a serious story. It turns out I didn’t need to be worried about that. I was so relieved that they accepted this film positively and gave me a prize.
Basically, I’m happy that children like this film. I am often asked: ‘What will happen after this story? Will the children in the film be okay?’ Most of the time, I turn the question back around and ask ‘What do you think of their future? Do you have any idea how they will live?’ The answers are usually positive.

Also, I got another remarkable reaction in Brazil. After one screening event, an old Brazilian man said to me, ‘This is my story.’ I asked him what he meant and he said that he had been in the same situation as the children in this film. He lost his parents when he was young and spent his childhood with his relatives. I was surprised and felt happy that this film could connect with other people.”

What did you want to focus on in this film?

“This film shows the everyday life of one person. I wanted this film to show those who cannot go back to their routines, the people who aren’t seen on TV.

I don’t want the audience think about this film separately from their own lives after they watch this movie, like ‘this is someone else’s story that happened sometime in the past.’ I want them to know that these things can happen to them too, that their lives could have been like what happened to the children in the film.

I know that there were both positive and negative reactions, but I want to accept all of those opinions and I’m looking forward to hearing various and honest responses from my audience.”

The local community will also commemorate the fifth anniversary of the Great East Japan Earthquake and Tsunami in 2011 through various events in the coming weeks. More information can be found on the calendar page.