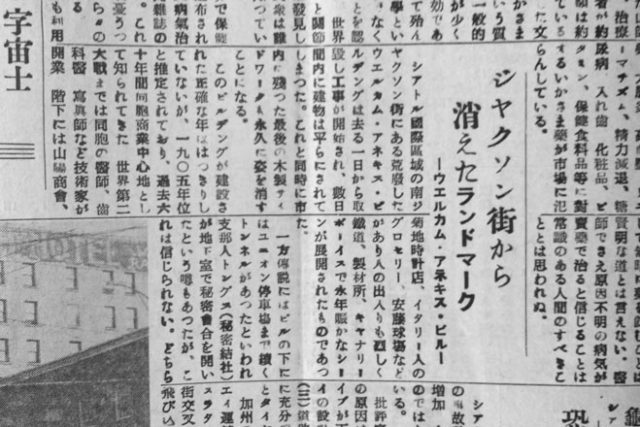 Welcome Aquinas Building, one of the old buildings at South Jackson Street in the International District, was torn down on Nov. 1. Everything was cleaned up in just a few days. At the same time, a wooden sidewalk, which was the last one in Seattle, was also removed.

It is not certain the exact year when the building was constructed, but it is estimated to be around 1905, and has since been a central site for local Japanese commerce for the last 60 years. Before World War II, a Japanese doctor, dentist and a furniture designer opened their offices upstairs. The downstairs had retailers including Sanyo Shokai, Kikuchi Watch Company, Ando Billiard, a grocery by an Italian family and others. The location was very busy since it was a place where railroad, sawmill and cannery workers liked to visit.

A rumor was once spread that a tunnel was built from the basement to Union Station to provide a secret meeting place for a Chinese tong. But it turned out to be false.

In any case, the old building, a landmark of Japantown, was destroyed, and the community members who have resided in Seattle have remembered it as part of the “good old days.”

The 150 Year History of Nikkei Immigration