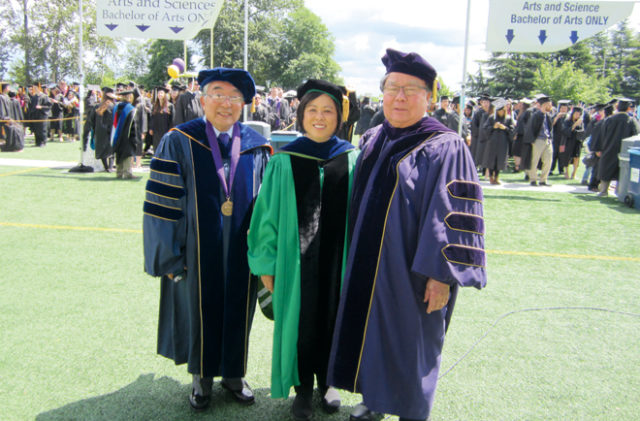 University of Washington professors Tetsuden Kashima, Gail Nomura and Stephen Sumida will retire by the end of this month, closing out the 2016 academic year. They have been notably instrumental as professors in the Department of American Ethnic Studies and will be leaving the department for “the next generation to take our place,” says Tetsuden Kashima.

Tetsuden Kashima has taught at UW for 39 years since 1976. He earned his PhD in Sociology from the University of California at San Diego and served as the director of Asian American Studies after becoming a professor at UW. Together with African American Studies and the Center for Chicano Studies, the Asian American Studies program joined to form the Department of American Ethnic Studies (AES) in 1986. Kashima plans to continue work on his 1972 dissertation on the role of Buddhism in the United States in book form along with another book project in his retirement. He is also looking forward to traveling and spending time with his wife.

Wife and husband, professors Gail Nomura and Stephen Sumida have taught at UW for 18 years in AES. Gail Nomura earned her PhD in History from the University of Hawaii at Manoa in 1978. She has done extensive work as President of the Association for Asian American Studies and as editor for the Journal of Asian American Studies. Like Kashima, Nomura plans to work on two of her own book projects including a new edition of her book Asian/Pacific Islander American Women: A Historical Anthology and finishing work on Contested Terrain: “Local” Japanese on the Yakima Indian Reservation, 1906-1942.
Stephen Sumida earned his PhD in English at UW in 1982 and began teaching in 1998 as an AES professor. Deemed a pioneer of Asian American literary studies, he helped organize the Pacific Northwest Asian American Writers’ Conferences, one of the first Asian American literature conferences in the country, in 1976. He is looking forward to continuing his passion for acting in theater productions, in which he has maintained a “steady string of roles” over the last five years. Sumida anticipates his next role in The United States of China to debut this month. Stephen Sumida and Gail Nomura both look forward to spending time together and with their grandchildren in retirement.
According to Kashima, the three professors will continue to work with UW and the community. The 2017 Day of Remembrance event observing the 75th anniversary of Executive Order 9066 and Japanese American exclusion is now under planning with other community organizations.

He also added that the Japanese American studies program is needed to continue in the UW program because of its importance, and a successor is expected to be appointed for the next academic year.

A retirement celebration for these three professors will be held at Blaine Memorial United Methodist Church on Aug. 27.

Professors Kashima, Nomura and Sumida will no doubt continue to impact generations to come at UW as students pass through AES and take on the challenge of social reform for ethnic minorities in America.

Discovering the Tomb of Umekichi Takahashi in Reno in 1967

DISCOVER NIKKEI – Yoemon Shinmasu, Life of My Grandfather in Seattle...