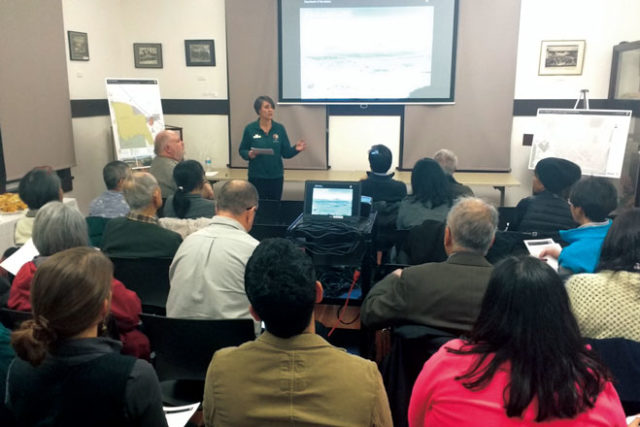 The National Park Service met local community members to hear ideas, opinions and suggestions on Tuesday at the Japanese Cultural & Community Center of Washington for the future management plan of the Tule Lake incarceration camp site.

The meeting was one of 13 public workshops by the NPS to discuss the plans for the next 20 years for the current Tule Lake Unit. Including former internees of the Tule Lake camp and their family members, over 50 attendees heard the current progress of the site and shared their thoughts.

The Tule Lake Unit preserves the site of the Tule Lake Segregation Center, which was one of 10 camps where 120,000 Japanese Americans were incarcerated during World War II. Over 29,000 people of Japanese ancestry were incarcerated there between 1942 and 1946, two thirds of whom were U.S. citizens. The camp was known as being a segregation center after the controversial loyalty question in 1943.

Some parts of the site were designated as one of the World War II Valor in the Pacific National Monuments in 2008 by President George W. Bush in order to preserve, study and interpret the history and setting of the incarceration of Japanese Americans. Currently, about 1,400 acres of the Tule Lake Segregation Center, the Camp Tule Lake and the Peninsula Castle Rock have been contained as the unit.

Anna Tamura of the NPS said the plan needs to be very realistic for the 20-year management with efficient budgeting and technology from current activities, future interpretation and educational programs toward the unit’s operation.

The project began in 2013 to examine how to effectively protect the site and educate the public about this chapter in American history. The NPS said that 600 individuals joined the public scoping period in 2013, which conjured up many ideas, including the site name-change to the Tule Lake National Historic Site.

An online public meeting will also be held on Jan. 10 and 18. More information can be found at <https://parkplanning.nps.gov/TuleLakeGMP>. Comments may be submitted online or may be sent to tule_superintendent@nps.gov by Feb. 10.

Falling into Public History: My Writing about Japanese American and African...