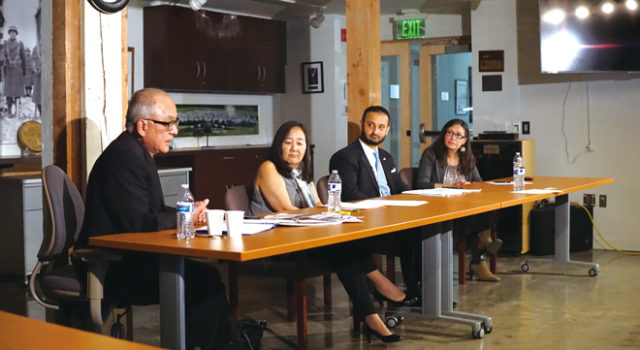 Panelists examined the similarities between anti-Japanese rhetoric and violence during World War II with hate speech and hate crimes targeting Muslim Americans, immigrants and people of color in a public discussion on May 30 at NVC Memorial Hall.

Frank Abe, who wrote and directed the PBS film “Conscience and Constitution” on the largest organized resistance to the incarceration of Japanese Americans, helped moderate the discussion by raising questions to the panelists and guiding the conversation to explore the similarities between their experiences in this country.

“We’re not concerned with partisan politics,” Abe said to the audience. “We hope to emphasize the fragility of our civil liberties, and examine how war hysteria, failure of leadership, and public silence can lead to civil rights violations on a massive scale. Our hope is to learn from the lessons of history, so we would never again allow such a terrible violation of rights.”

Seattle University professor Lorraine Bannai served as a voice for the Japanese American community. A professor of lawyering skills and the Director of the Fred T. Korematsu Center for Law and Equality at Seattle University, Bannai has spoken and written extensively on incarceration and served on the legal team that successfully challenged Fred Korematsu’s conviction for violating the military orders removing Japanese Americans from the West Coast during World War II.

She explained to audience members how certain moments in our country’s history—moments of incarceration, oppression and subjugation—are grounded in ignorance and fear.

“You don’t just round people up because of their race,” she said. “Loyalty is a matter of the mind, not of race, creed, or color.”

Arsalan Bukhari, Executive Director of the Washington State chapter of Council on American-Islamic Relations, is a U.S. citizen and a long-time resident of Seattle. He spoke proudly of his heritage and the contribution he and other Muslim Americans have made to their country.

“American Muslims are defined by their contribution to this country,” he said.
Bukhari explained the damaging effects of Islamophobia and other forms of hate speech and hate crime directed at the Muslim population. Those behaviors can lead to real aggression and violence, he said, and more specifically, harm the aspirations of Muslim American children.

“When hate speech goes unchallenged, that’s the problem. Hate speech leads to hate crime. The job of leaders is to speak out and challenge that,” Bukhari said. “What we’re facing today is about the character of our country and of us as a people.”

Maru Mora Villalpando served on the panel as a representative of the immigrant population in the U.S. An undocumented Mexican immigrant and a dedicated organizer and consultant for non-profits and grassroots organizations working for racial justice, Villalpando frequently takes part in discussions to voice her opinions on immigrant rights.

She is also a political analyst for local Latino media outlets and writes for Latino publications across the state. “We understand the plight of people in this country,” she said. “As long as we look out for each other, we can change the narrative.”

As Villalpando said, working together may be the key to overcoming the mistreatment and abuse of minority populations in this country. Each of the aforementioned panelists have a unique past full of individual experiences that only they can recall, but in coming together and sharing those experiences, an intersection can be found.

While history is permanent, conversations like this serves as a reminder to make sure mistakes are not repeated, to keep a careful eye on those with power in this country and to remain united.