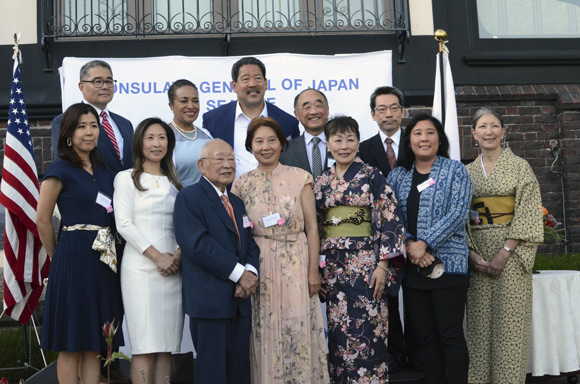 On Thursday, July 21, the Consul General of Japan in Seattle hosted a celebration to commemorate the “North American Post” and “Soy Source” 120th year and 30th year anniversaries, respectively. While the Post’s actual anniversary is not until September, the outdoor event was scheduled for favorable midsummer weather with 100 guests in attendance.

Elaine Ikoma Ko, regular NAP contributor and Hokubei Hochi (NAP) Foundation board member, was the emcee for the evening’s program. She stated that it is an honor to be the sole remaining Seattle Japanese-language newspaper of three former dailies. Her grandfather, Sadahiko Ikoma, was publisher of the newspaper immediately after WWII.

The Honorable Consul General Hisao Inagaki provided congratulatory remarks as did Seattle Mayor Bruce Harrell. Misa Murohashi, former general manager, provided an overview of the newspaper’s 120-year history. Tomio Moriguchi spoke as he has been the publisher since 1988. A powerful speech and toast were delivered by The Honorable Sharon Tomiko Santos, 37th District State Representative.

To begin his remarks, Consul General Inagaki appropriately asked for a moment of silence in tribute to the former Prime Minister Shinzo Abe, who was recently assassinated. He then described the NAP as “a driving force” connecting Japanese expatriates to their homeland. He noted how over 600 articles have been translated to English from its digital archives to date.
“It is no exaggeration to say that there is no single record in the world like it capturing the daily lives of Japanese immigrants,” he stated.
“I am thankful to the many writers of the “Hokubei Hochi” family who have been writing articles for the past 120 years,” he continued. “They continued to interview, cover and report with their pens and camera and with their feet for every paper printing. They edited to reach the highest standard in every article. I would like to mention their passions, efforts and determination. Each one of them had their own hardships.”

Consul General Inagaki described how a 60th birthday is termed “Kanreki.” It is culturally special throughout Asia because it represents the complete cycle through the 12 monthly animals of the Chinese zodiac. (The sixty-year cycle results from the repeating earthly creatures being assigned to five celestial sets — wood, fire, earth, metal, and water.)

Mayor Harrell, referring to a City of Seattle Proclamation marking the day as “NAP 120th and Soy Source 30th Anniversaries Day,” described such documents as “not just ceremonial but rather, they are entries into the city’s history.”

Mayor Harrell continued by sharing how proud he is of his Japanese American heritage and stories of his family. The latter included how close his wife, Joanne Harrell was with his mother, Rose Kobata Harrell (who passed away in 2014).
“I am most grateful to my Nisei (second generation Japanese) mother whom I credit for my tenacity. Everyone thinks I got it from my dad, but it comes from my mother,” he said.
He closed his remarks by reading the mayoral proclamation: “Whereas the ‘North American Post’ and its predecessor…. Whereas its sister newspaper ‘Soy Source’… I hereby proclaim July 21 as “120th Anniversary of the North American Post and the 30th Anniversary of Soy Source Day” (see box and photo of proclamation).

Misa Murohashi commented that during her tenure at the NAP and “Soy Source,” she really enjoyed learning about the Japanese American community (as a Japanese expat).
“Japanese Americans were the largest minority community in the Pacific Northwest before WWII,” she noted.
As a native-Japanese reader of the old NAP issues online, Misa described how during the 1950s and 1960s, the NAP consistently covered all the important issues such as limits on Asian immigration and discrimination faced by Japanese Americans.
“In the 1970s, NAP subscriptions dropped, with the passing of the Issei immigrant generation. In 1973, the “Seattle Times” stated that the NAP may close,” Misa continued.
The newspaper was rescued by a group of Nisei investors in 1981, of whom Tomio Moriguchi is the sole survivor.

Publisher Moriguchi was introduced as a business and community leader for over 50 years, ever present and on-the-go. Even today, he is sponsoring a new project called Fujimatsu Village in the Chinatown-International District.
“I don’t have the background as a media person. I am a small-business person trained as an engineer. But I always felt it was important to have a Japanese community newspaper,” Tomio stated.

Tomio noted that he has 24 first cousins in Japan, all of whom he has met. He wants people in Seattle to have that sort of relationship with Japan. Tomio thanked the staff and many supporters for their years of dedicated support. Many of the guests are longtime advertisers of the newspaper.
Tomio concluded by presenting gifts to Consul General Inagaki and Mrs. Inagaki: keepsake books about the Pacific Northwest.
Next, staff, volunteers and board members took the stage and presented Tomio with a surprise award: an engraved clock thanking him for his decades of service and leadership to the newspapers.

As the last speaker, State Representative Sharon Tomiko Santos remarked, “We are gathered today to celebrate an incredible accomplishment. I call it remarkable because the newspaper business is a dying industry in our 24-7-365 society.”
“The public and community service that has been provided by NAP and ‘Soy Source’ are all the more notable…” she continued. “The digitalization (of the NAP archives) is going to be a treasure trove that historians today and in the future can ask about how the Japanese community … thrived in Seattle…”
She stated that it reflects “the sweat and heart of the people… the publishers… the investors… the volunteers…”
“I have just one thing to say: Otsukaresama deshita. Thank you for all of your hard work,” she concluded as she raised a sake glass for the traditional Japanese “kampai” toast.
With the speeches ended, light bento were passed out and the crowd enjoyed time together. Guests were given gifts of anniversary tote bags and a commemorative postcard with a written reminder to subscribe to the newspaper as an important means of financial support.

My own reflections are that the insightful gathering proved memorable for many reasons. First, while Consul General receptions occurred regularly pre-COVID-19, it was one of the first large gatherings that guests could attend in-person in over two years. Second, the weather was perfect, which Tomio jokingly took credit for. Third, the speeches were superb! Fourth, the assembled crowd was dressed splendidly; many Japanese and Japanese American guests wore formal kimonos. Such attire is rare because most JAs today did not grow up with mothers from Japan who could teach them how to wear the complex traditional dress.

Altogether, it was a remarkable evening. It was a fitting tribute to a long and illustrious history.