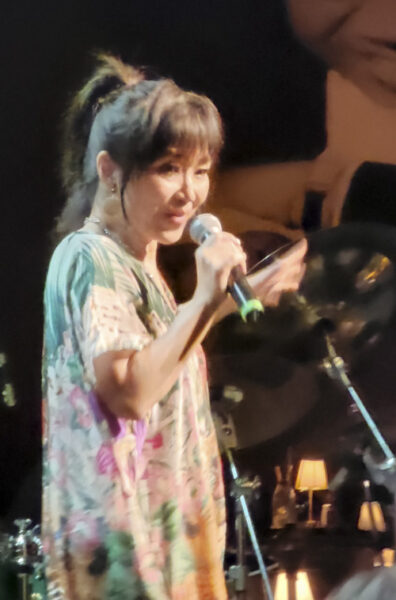 Listening to Matsui play, this reporter was at once struck by her exceptional talent, by how upbeat her nature-inspired music is, and by her charming, kindly onstage presence. I had last attended one of her concerts 10-15 years ago, similarly to cover it for this paper. In the time since, I had forgotten how lovely her music is. I was also reminded how wondrous live music can be, which we have all missed out on during COVID-19.

In he r conve r s ations w ith the Ichiro Hall of FameBy NAPChina (where their daughter Mariko w as born) . . . and Washington , where they were… living at the time of… Pearl Harbor. As head of Japanese intelligence in the Western Hemisphere, Terasaki took enormous personal risks to avert war between the two countries…”Mrs. Terasaki describes with rare perception and fine humor her months of internment with the Japanese diplomatic corps at Hot Springs and White Sulphur Springs (MT), the long voyage back to Japan via Africa on the famed exchange ship Gripsholm, and I was surprised to see the title reviewed by David Yamaguchi, “Bridge to the Sun.”“Oh, I’ve read that!” Then, as I read David’s treatment, my surprise turned to confusion, “Oh, no, I haven’t! What gives?”Time ago, around 2005, I think, a student of mine in Chiba, Japan, where I lived at the time, recommended to me with some enthusiasm “Bridge to the Sun.” I include the Amazon Kindle review:”National Book Award Finalist Non-Fiction (1958) Washington Post Non-Fiction Book of the Year (1958) New York Times Bestseller”‘Bridge to the Sun’ is a beautiful, tender, and moving love story — the true report of an international and interracial marriage of an American girl from the mountains of Tennessee and a Japanese diplomat. They were married in 1931, just as tension between their two countries was mounting… “In the following ten years, Mr. Terasaki’s service with the Japanese Foreign Office took them to Japan, audience, Matsui conveyed how it has been “an exciting summer… as (she) has had more tour dates.” Moreover, she recently completed an “amazing” charity trip to Paraguay, which she really enjoyed.

Among the songs she and her traveling band of three played, she opened with “Moving On” from her “Journey to the Heart” album. Two others I especially liked were “Butterfly” from the same album and “Safari.” She ended with “Forever Forever,” her most famous song.

Matsui played the venue piano with her electronic keyboard set atop of it. At times, she changed to a melodica, a small keyboard with a hose mouthpiece that produces a clarinet-like sound. (See YouTube, “’Casablanca’ Live from Keiko’s Living Room.”)

If Matsui ‘s Sunday evening 7:30 p.m. performance was any indication, she likely did quite well with her Seattle shows. The venue was packed and the crowd enthusiastic. According to the Jazz Alley emcee, she sold 50-60 CDs per night on the prior days and was down to her last 20 for Sunday.

Matsui still has it. I found that I came away from her performance with my energy recharged. She remains an evolving musician who continues to travel the world, pursuing her art.