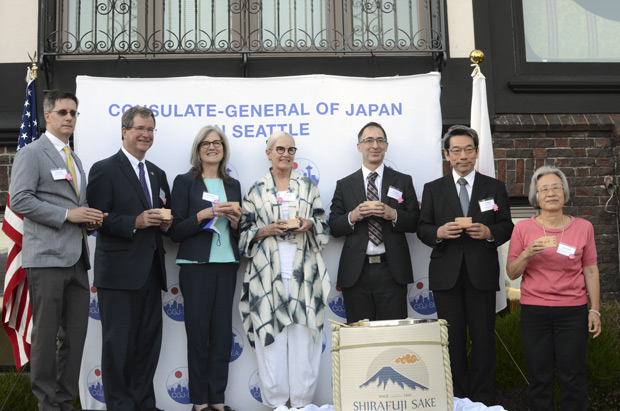 On Friday, August 12, the Consul General of Japan in Seattle hosted a reception for the Japanese Studies program at the University of Washington, Department of Asian Languages & Literature. The gathering notably highlighted the work of Washin Kai, a volunteer group affiliated with the program’s classical Japanese studies. One reason for the gathering was to recognize Washin Kai’s establishment of an endowment fund, which will foster the program’s continuation into the future. A second purpose was to promote networking among teachers of Japanese language around Greater Seattle. For this reason, representatives of the latter were also invited.

Classical Japanese at UW involves the study of Japanese language, literature, and culture before Japan renewed contact with the West (1854).

Besides helping the underfunded UW program raise long-term funding, Washin Kai’s two short-term goals have been (a) to raise fellowship funds to support graduate students in classical Japanese literature and (b) to support public educational events that increase awareness and appreciation of Japanese culture.

The best known Washin Kai events of late have been Prof. Paul Atkins’ annual lectures. From them, attendees and NAP readers have gained a basic or better understanding of Japanese cultural mysteries beyond what most of us had previously known. Owing to these Zoom-based talks, we can now participate in conversations on Noh (classical theater), Rakugo (Japanese sit-down comedy), and the “Hyakunin Isshu” (“100 poems by 100 poets”).

Turning to the reception, Yumi Iwasaki, one of two Washin-Kai co-chairs, served admirably as the evening’s mistress of ceremonies. The lineup of speakers she was charged with introducing was truly outstanding. Each proved to be an exceptional speaker (as did Iwasaki-san!), in part because most are UW professors, well-practiced in the art. Moreover, nearly all had some pearl of wisdom to impart to the attentive listener.

Regarding classical Japanese literature, he commented that it is important to study to be reminded of how times have changed, yet also of how they have remained the same.
“We can learn from the past and learn from the future,” he said. He closed by expressing his gratitude to the UW Japanese Studies program for its work.

Dianne Harris (Dean, UW College of Arts & Sciences) took the podium next. The historian of built environments shared her own history of teaching a class, “The history of world landscapes,” and how her two lectures on Japan were both among her favorites and deeply moved her students.

Finally, visiting Japan herself in December 2019, she described it as a “late-life transformational experience.” She shared her view that it is “profoundly important for students at UW to benefit from the experiences that Washin Kai makes possible.”
Next, Zev Handel, professor of Chinese and chair of the Department of Asian Languages and Literature, spoke. As explained by Iwasaki-san, he wrote a book titled “Sinography.” It concerns how other languages adapted written Chinese to write their own languages. (Japanese, of course, is one such language.)

Among his remarks, Handel explained that since 1951, there has always been a specialist in classical Japanese literature. Of these, Paul Atkins is only the fifth one.

Moreover, Handel continued, “the scholarly enterprise cannot be understood by a study of the present alone.” So at UW, we teach Hindi and Bollywood, but also Sanskrit…”
Next, Leslie Yamada, of Washin Kai, addressed the audience. It was her speech that disclosed the new Washin Kai endowment (formally, the Washin Kai Endowed Program Support Fund).

She said, “Today we announce the Washin Kai Endowment at the UW.” She explained that the name Washin Kai comes from a combination of two phrases, “the heart of japan” and “kai” (a meeting or society).

She and her late husband, gastroenterology researcher Tadataka “Tachi” Yamada, made the leading gift to the endowment.

The Caucasian American explained that “being able to live in Japan even for a short time was the best gift my parents gave me.”

Reiterating the evening’s recurrent theme, she said, “one cannot have a rich contemporary culture without the past.”

Yamada said she “felt it was important to help the study of Japanese literature at the UW.”
Paul Atkins, professor of classical Japanese, came next.

He commented that “it is so good to know that I am not alone” (in valuing historical Japanese studies). He explained that “classical Japanese is the language that brought us treasures such as haiku poetry, the “Heike Monogatari” (“The Tales of the Heike”) and the “Tale of Genji.”

Atkins continued by introducing the term “mujō,” which is the basic concept that “nothing endures, no one abides, and nothing is permanent; everything is temporary.” It is a way of thinking that enabled medieval Japanese people to survive war, disease, and famine…”

To illustrate mujō, he recited the famous opening lines of “Tales of the Heike.”

Atkins followed with a translation,
“The tolling of the bell at the Jetavana monastery
contains the sound of the impermanence of all
actions;
and the colors of the blossoms of the twin Sala
trees
express the principle that those who prosper will
surely decline.

The proud ones are not long for this world,
they are merely like a dream on a spring night.

The fierce people too will perish in the end,
they are nothing but dust before the wind.”

From there, Atkins explained that mujō perhaps inspired the better known Japanese phrase, “Ichigo ichie.” It means that “today is a special moment that will not be repeated…”

In turn, Yuko Kikuchi of Washin Kai explained “kagami-biraki,” or “sake-barrel opening.” It is a traditional ritual in Japan that is performed at weddings, at New Year’s, for the opening of new businesses, and for housewarming parties.

She explained that the lid of the cask represents harmony, and that by opening it, we pray for good health and happiness.

Shirafuji Sake Brewery donated the sake. The story behind this brewery is a story in itself.

The family has been brewing sake since 1716. Two 21st generation (!) representatives, Mari and Mamoru Tomisawa, were present from Fukushima. Their main facility is two miles from the infamous tsunami-crippled nuclear power plant. They lost two family members in the disaster. They had to leave their home. However, on visiting Seattle, Mari said she “had a good feeling” about it. She especially saw the Seattle winter as being very similar to that of Fukushima for sake brewing. Thus, the family worked with a local architect to start its first brewery in Seattle. The reception’s sake was from their first batch made in Seattle.

Kikuchi-san taught, then led the crowd in yelling “Yoisho, Yoisho, Yoisho” as the ceremonial lid was broken by Consul General Inagaki and Dean Harris. Wooden sake cups were passed to those interested in having a taste.

The evening’s formal program came to an end with Jeffrey Riedinger, UW Vice Provost for Global Affairs, offering a toast.

He said, “We live in times of extraordinary challenges and extraordinary opportunities… This is a moment for knowledge diplomacy…. a time for those of us (in academia and other outward-looking activities) to build bridges (when politicians are at odds)… I am delighted we have this private/public partnership to celebrate this remarkable achievement.”

Naomi Minegishi, a founding member and present co-chair of Washin Kai, provided brief concluding remarks to the formal portion of the reception. She reminded those present that we will next have an opportunity to gather at its Oct. 19 fall lecture, “What is Haiku?”

In a later email, Minegishi summarized the larger significance of the pleasant summer gathering.

“This event has put wind in our sails to grow the endowment for future students.”

More on the UW Washin Kai Endowment Fund is at: asian.washington.edu/washin-kai-friends-classical-japanese

UW lecture: how ‘No-No Boy’ went from forgotten to wild...