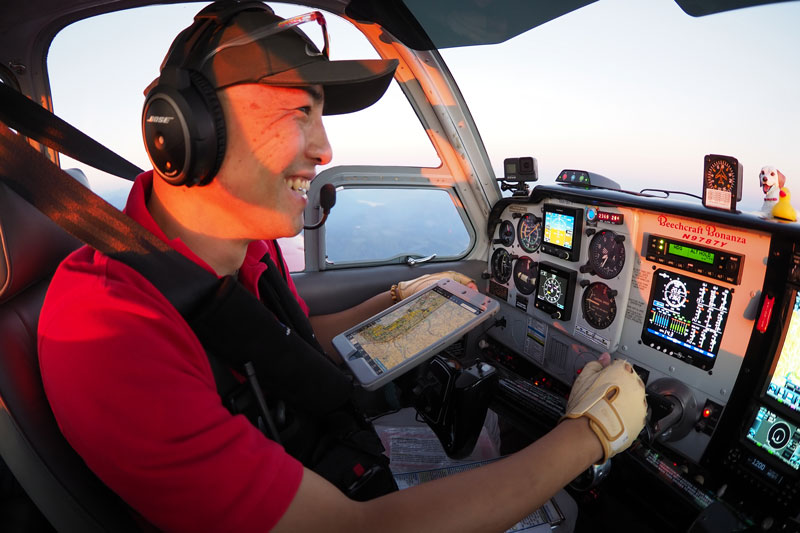 Shinji Maeda, founder of Aero Zypangu Project who calls himself a “one-eyed pilot,” departed for his around-the-world flight on May 1st. This mission is to inspire people with his message, “Nothing is impossible.” NAP interviewed him just before his departure from Seattle. He enthusiastically shared the message of his mission.

Shinji Maeda was born in Hokkaido prefecture. Dreaming about becoming a pilot since his childhood, he went to Japan Aviation High School, Yamanashi prefecture, and entered the College of Science and Technology, Nihon University, to study aerospace engineering. However, just after his admission, he was hit by a car and lost sight in his right eye. To achieve his dream even after the accident, he left Japan to study at Embry-Riddle Aeronautical University, Arizona, where he earned a master’s degree in Safety Science. After graduation, he has worked as an aviation engineer at ShinMaywa Industries, Ltd. and Boeing. While working as an engineer, he earned licenses as a commercial pilot and flight instructor in the United States. In 2016, he launched the Aero Zypangu Project, a nonprofit organization, to give lectures and flight training to young people.

Shinji Maeda is a Shin-Issei who is active in our community as founder and president of Aero Zypangu Project, a 501c3 nonprofit organization

Shinji Maeda is a Shin-Issei who is active in our community as founder and president of Aero Zypangu Project, a 501c3 non-profit organization he founded with his supporters. Its mission is “to provide opportunities and experiences that inspire hope, strength, and joy in people with disabilities, in youngsters, and in their families through aviation activities.” Through his motivational lectures and discovery flight lessons, Shinji delivers his message, “Nothing is impossible,” through his own life experiences.

Shinji began dreaming about becoming a pilot when he was a kindergartener.

“The view of Tokachi Plain looking down from my flight back from Tokyo, which was my first trip out from Hokkaido, was so beautiful. I remember I was convinced to become a pilot to see this kind of scenery all the time.”

As a child, Shinji loved looking up at the sky from his father’s farmland, thinking about becoming a pilot. After graduating from junior high school, he left his parents’ home to attend Japan Aviation High School in Yamanashi Prefecture, west of Tokyo. From there, he was admitted to the Department of Aerospace Engineering at the College of Science and Technology, Nihon University. As he was striving toward his dream, he experienced a major setback in his first year of college. He was hit by a car on the street and lost sight in his right eye.

In Japan, you cannot be a pilot with sight in only one eye.

“Many adults back then advised me that it’s almost impossible for people with disabilities to play an active role in the aviation industry. I had been thinking about life only as a pilot, so I was totally lost,” says Shinji.

He even thought about suicide. But harsh words from his high school teacher, who called him from Yamanashi, saved Shinji.

His teacher told him, “Even if you die, the world will just forget about you and nothing will change. I will forget you, too. If you die here, you are the loser. The only thing that happens is that your parents will cry for you throughout the rest of their lives.”

All his friends from high school and college also supported him in chasing his dream of becoming a pilot.

After graduating from Nihon University, he moved to the United States to earn a master’s degree at Embry-Riddle Aviation University, Prescott, Arizona, with the aim of finding a job in the aviation industry as his career.

“I realized that I cannot pursue my dream if I stay in Japan. I did research to find colleges outside of Japan which offer master’s programs in risk management, which I started to become interested in after I suffered from the car accident. Embry-Riddle was the only option.”

After graduating from Embry-Riddle, he started working as a technical coordinator at the North American Headquarters of ShinMaywa Industries, Ltd. in California.

“This very first opportunity for me to work in the aviation industry gave me great understanding about aerospace production and its industry,” says Shinji.

After working a few years at ShinMaywa, he was headhunted by his client at Boeing.

“It was a great surprise for me. I never thought that I could get a job at Boeing!”

Now he has been working as a manufacturing operation specialist at Boeing for 13 years.

“My job is to analyze how to efficiently build the wings of airplanes and manage the process,” says Shinji.

He has been successfully working in the aviation industry which he was told was “impossible.”

Another turning point for him came when he was on a long-term business trip in Japan for Boeing.

“It was more than ten years after I moved to the United States. But I realized that the sky in Japan had not changed. There were no pilots with disabilities in Japan,” says Shinji.

He also questioned how most engineers in the Japanese aviation industry had no experience flying aircraft. He wanted to change this situation. When he returned to the United States, he obtained a license as a commercial pilot. He had previously obtained licenses as a non-commercial pilot and a flight instructor. Although he had already started delivering motivational lectures at different educational institutions, he then launched the Aero Zypangu Project to officially start his activities. With his instructor’s license, he began leading “Discovery Flights” where anyone can hold the control stick on his airplane and experience flying.

“My message with Discovery Flight is ‘you can be a pilot!’”

It does not have to be only for those who want to become pilots.

“It is important to give confidence to young people through this ‘I can do it’ experience,” explains Shinji.

He also started to warm up to the concept of a round-the-world flight mission to spread his “you can do it” message even further.

“Lucy” is the aircraft that Shinji took off in on May 1. She is a Beechcraft Bonanza made in 1963.

“I purchased her from my former boss at ShinMaywa. He gave me a very reasonable price after I told him about my round-the-world flight mission,” says Shinji.

It was a long process after the purchase.

“It took about four years. I worked with professional engineers who are experts in different areas to retrofit her. We replaced her engine, propeller, navigation system, etc.”

This process was possible because of his career background.

“Honestly, I used to be worried about whether or not I could really go around the world with such an old aircraft,” he confesses. “At that time, I met Adrian Eichhorn, who made a successful round-the-world flight with the same Beechcraft Bonanza 1963 aircraft in 2016.”

When Shinji contacted Adrian, his reply was very curt, as he assumed Shinji was not serious like many other inquirers.

But after looking at Shinji’s serious plan in progress, Adrian messaged Shinji, “Sorry, I wish I had cooperated earlier. I will help you out.”

After that, Adrian frequently visited Seattle from his base in Washington, D.C. to help Shinji and his mechanics team retrofit Lucy.

With each retrofit, Shinji became fascinated by Lucy’s old charm.

“Her aircraft body smells like the age of 1963. Through her, I can feel what the engineers in that era used to think when building the aircraft. It is quite interesting as an engineer. She is a beautifully crafted airplane.”

Now, it is an age where new technology is always highlighted and appraised.

However, “I feel this mission can also demonstrate the beauty of retrofitting old things. I want to prove that this old aircraft can go around the world if refurbished to the best condition.”

Flying around the world is a big project. It includes over ten hours of intercontinental travel from Canada to Ireland, as well as from Japan to Seattle. There will be many risks involved. Does Shinji have any worries?

“Of course, there are risks. However, since I am not visiting dangerous areas such as war zones, all risks can be under control. I can minimize risks by preparing for them,” says Shinji.

During the four-year preparation period, he did all he could do to retrofit Lucy to the best possible condition. Through the connection with Adrian, who used to work as a commercial pilot, Shinji was able to conduct various flight trainings for possible accidents. His flight route was thoughtfully planned, including refueling spots and safe accommodations. Adrian gave Shinji much advice from his previously successful mission.

“So, once I leave for the mission, all I have to do is keep flying.”

Message for the next generation

In 2019, Shinji’s father, who always encouraged him to pursue his dream, passed away.

“When he was lying in the hospital bed, my father told me, “I finally understand how you felt when you were hospitalized for months after the car accident. It must have been hard for you as an 18-year-old young man. Everyone faces their own obstructions, small and large. You have overcome yours and your dreams have come true. Tell more people what you did so others can do it, too.

“This was the last message from my father and it made me determined to complete the round-the-world flight mission.”

“I think young people can feel hopeful by learning from a one-eyed ojisan (old man in Japanese) like me enjoying my own freedom, flying around the world, pursuing my dream,” remarks Shinji. “I indeed want to have young people especially with handicaps and disabilities to have dreams and step forward with them.”

His passion and energy simply pursuing his dreams flying around-the-world on his own should surely inspire people in the current pandemic recovery period.

Departing from Everett’s Paine Field, Shinji will visit 11 countries, including Japan, in the two months prior to July. Due to the pandemic, lectures originally planned at destinations have been postponed. However, online lectures will be scheduled after Shinji’s return.