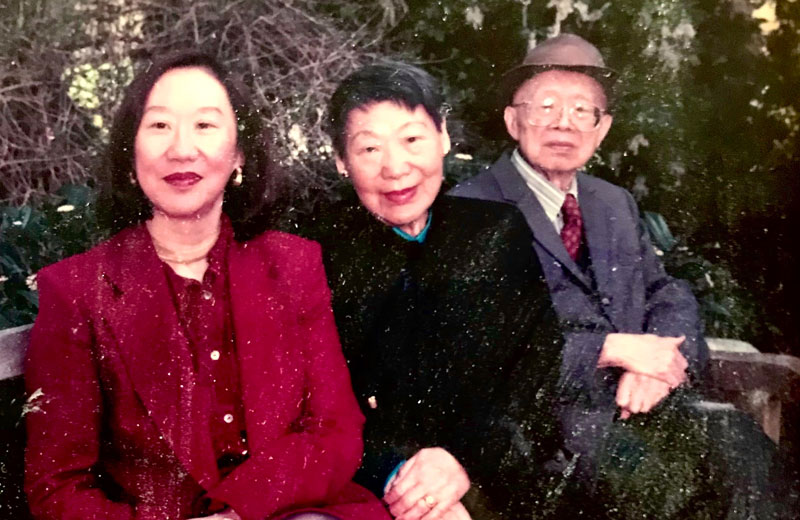 By Jean Liu Chen, for The North American Post

I sought a professional portrait to commemorate my parents’ relocation to Seattle. We are sitting together in Parson’s Garden, a city park on Queen Anne Hill, facing the photographer on a weathered, wooden bench.

The image captures three distinct individuals, born in three Chinese cities distant from each other, and raised in different cultures.

My mother is a privileged woman from an old, well-to-do family in the capitol of China, Beijing. The youngest of three sisters, she grew up horseback riding, ice skating, and attending a university, earning a degree in economics.

My father, the oldest of five brothers, left home, never to return to Canton, his birthplace. His father, an American citizen, traveled frequently across the Pacific, between Canton and New York City. He assisted my father to come to the USA as a teenager.

I was born in China, yet declared an American by my father, a second-generation American. A remarkable, long, circuitous, journey brought me to America. It began with a ride in a small airplane from China over the Himalayas to Calcutta, India. There, I boarded a cargo ship hauling “wartime equipment” back to the United States via the Suez Canal and across the Atlantic Ocean.

Imagine my arrival in New York as a three-year-old, and how vastly differently I was raised—only by my parents—unlike most Chinese families where uncles, aunts, and grandparents also participate. The cultural ties for millions of immigrants are cut—never to be reconnected—including those of Chinese Americans.

The dominant color in the photograph is my red suit, worn with a pink cotton turtleneck and sheer black stockings. I am not wearing a wedding ring. In 1996, I live with housemates near UW in a house I started building in 1988.

My peaceful, quiet smile shows that I’m pleased that we are newly reunited as a family in Seattle. The photo doesn’t depict me as the frazzled single adult-child who will soon be dealing with numerous family needs such as finding quality Chinese restaurants comparable to New York City’s, health care, seeking diagnosis of my father’s illness, my mom’s broken thigh bone, and ultimately, death in the family while balancing my career and private life.

In this Mother’s Day photo, my parents are dressed up in their usual, subtle way, as they always were in public. Father, 85, wears his familiar hat, a gray suit, and a brightly colored tie (that my mother clearly selected). He looks unhealthy and his expression is, sadly, not one of being alert or engaged.

Father is three years away from his sudden death by pancreatic cancer. My mother is smiling and a young 79. She would survive well, as a widow with many accomplishments, until age 92.

Queen Anne Hill, on this holiday, has a spring fragrance of flower buds beginning to bloom. Yet, beneath the surface of this delightful day, and captured in the photograph, is my father’s frailty. My mother and I do not see his normally stubborn and temperamental nature, which concerns us. He has left NYC after six decades, a bit unwillingly, along with old friends, and favorite and familiar places.

Father, a retired electrical engineer, is in a strange city with a daughter who doesn’t fit his picture of a serene and understandable woman like his wife. The photograph hardly depicts how fervently my mother was beloved by her Pan American World Airway colleagues during her 30-year accounting career.

I bewildered my father: I didn’t raise children, cook, sew, embroider, knit, watch TV. I didn’t remain married to one man (unlike my mother). I didn’t sit at home many evenings and after long days at work. I had numerous careers in a hospital, museums, universities, non-profits, corporations, and social work, in that order.

My parents raised a daughter who: loved to be with friends at exhibits, concerts, ice hockey and basketball games; swims, walks, plays tennis; volunteers at theatres, attends films, dances, eats out, travels; develops photographs, takes art classes, writes; reads the New Yorker and the New York Times with “All the news that’s fit to print;” and most of all, relishes remodeling and building homes as a lifelong “hobby.”

The photograph neither depicts nor hints at our relationships, similarities, or differences. The image conveys neither tension nor upset.

In my Chinese family, we didn’t discuss our fears, worries, feelings, sadness, bliss, paradise, or what makes us cry or laugh. The photograph doesn’t reveal any of our perspectives on family matters.

A question for both parents: did they realize my life choices were based on their choices? I would tell them that I am like each of them.

Mother provided ballet lessons giving me my love of dance. She  taught me to play tennis. She took me to foreign countries, to appreciate other cultures, and offered me the confidence to understand that I was capable. Later, I eagerly went to Indonesia to work for Boeing.

Dad took me to the public library, to movies, and to events in NYC. These taught me to read and love film and live theatre. He taught me to swim every summer in public pools. My father taught me that I had the freedom to choose different careers.

There are many costs associated with having a life derived from two countries. The family portrait doesn’t approach all the storytelling it stimulates for me.

Jean Liu Chen is active in Seattle area arts and culture groups. She was once employed at the National Endowment for The Arts. Her parents’ names are inscribed at the Seattle Asian Art Museum’s Community Room.
Jean holds a Master’s of Social Work from the UW. She was active in finding homes for Chinese orphans in America and in other social programs. While her first love is architecture, she was denied entry to the program in college due to gender bias that prevailed at the time.
Jean is married to Dr. John Miyamoto, a retired UW faculty member. Her essay began as an Omoide writing assignment to “interview” a family photograph.

Editor’s note. Like Japanese-American immigration, Chinese-American families entered the “Golden Door” to the United States during brief intervals when it opened to them. Iris Chang’s “The Chinese in America” (2004, 544 pp.) is a good introduction to the topic.