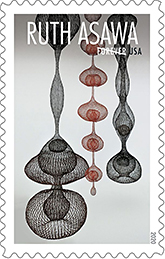 Have you ever seen a stamp commemorating the contributions of Japanese Americans to the United States? Ruth Asawa (1926-2013) was a Nisei sculptor. Best known for her intricate wirework, she learned her craft in the Rohwer internment camp, Arkansas. Her stamps, which were released on Aug. 13, are available in sheets of twenty ($11). Each sheet shows ten sculptures.