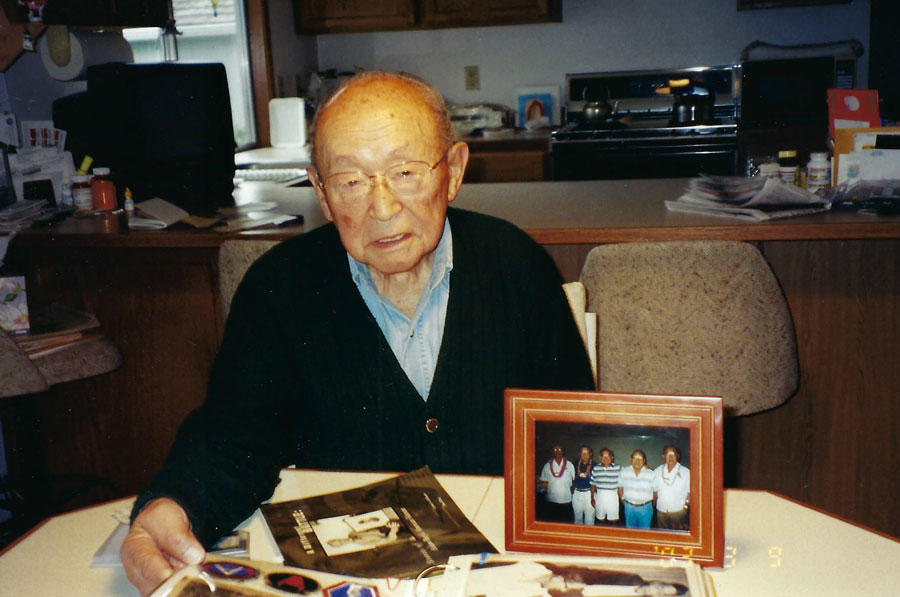 On February 19, 1942, two months after the Japanese Navy attacked Pearl Harbor, President Roosevelt issued Executive Order 9066. Almost 8,000 Japanese and Japanese Americans in the Seattle area were sent to internment camps. Among them, two thirds were American-born Nisei. Many of the young men were in two groups: “No-No Boys” and volunteers for the U.S. Army. Now that they are aging, the quiet Nisei ex-soldiers are willing to tell their unspoken stories. Having lived through the war themselves, their wishes for peace are immense. We will bring you their true voices with a series of interviews beginning with Richard Naito.

“I’m not a hero,” said Richard in a modest way. He brought out a thick scrapbook, a record of his war experiences. It’s his treasure. By the way he walks, you wouldn’t be able to tell that he is 91 years old.

Born and raised in Kent, Washington, Richard was operating a farm supply shop when the war began. He volunteered to evacuate to Puyallup and Minidoka, but had to leave his white wife behind. He volunteered to work as a general manager of 13 warehouses in Minidoka since internees were allowed to live outside the camps. Then he sponsored a friend and several Japanese Americans who became employed thereafter. Later on, he tried to get a job for weeks and finally found one detailing cars, which means polishing them.

“It wouldn’t be any good,” thought Richard. “We are going to be treated like Indians put on a reservation.”

“We didn’t have any problem but people came from Hawaii who couldn’t get along with the whites. We were so used to being called Japs, but people from Hawaii tried to fight back.”

There was also discrimination against blacks. They couldn’t use water fountains, toilets, seats on the bus or in movies in the town near Camp Shelby, Mississippi, but the Japanese were considered whites.

“We felt sorry for them but we could do nothing about it.”

The training was hard for Richard.

“I was 31, but everybody else was like 21 or 22 years old. After the daily training, they’d shower and eat. I wanted to go to bed. But they (younger men) recovered. So they went to town, to movies, or whatever.”

On September 15, 1943, the 442nd left for Italy. It took 26 days for their ship to cross the Atlantic Ocean, sailing in a zig-zag pattern to avoid German submarines. After landing in Italy, they went through a couple of villages but in the third one, the German resistance was so severe that they couldn’t advance at all.

“I got wounded there,” Richard said, rolling up his jeans, showing his right leg that is slightly deformed.

“You could feel the steel there. You could have seen it a while ago.”

Richard’s leg was shattered by the enemy’s machine gun and he laid down until the medics got there.

“It must have been seven or nine hours before they got there. The resistance was so bad that they had to wait until night time. I got wounded in the morning and they came after the sun went down.”

The 442nd lost many soldiers that day. He was bleeding so much that he was losing consciousness.

“I thought they were calling my name from heaven.”

Richard’s memories of 60 years are still fresh. He was sent back home on a hospital ship, suffering hepatitis on top of the broken leg.

Someone was screaming on the deck, “Look Dick, come up here! The Statue of Liberty!”

But he was too weak to go upstairs.

Later on, Dick finally got to Washington State, where he encountered unexpected racism. The patients at the hospital in Spokane didn’t want him there.

“They said, ‘No Japs, No Japs. We don’t want to be with Japs.’ They fought against Japanese at the Pacific.”

Then a nurse came and said, “Look, what uniform does Dick have? Japanese or American?”

One day, one of the new friends asked Dick, “How would you like to join the Veterans of Foreign Wars (VFW)?”

They were comrades, wounded in war at the same time but in two extremely different parts of the world.

He was rejected because of his race. He responded to the VFW right away.

In his letter, he wrote, “Today on American soil, thousands of miles from Pisa, I have been wounded again by another weapon—hypocrisy, prejudice, call it what you will. Little did I expect, as I lay wounded on the battlefield that, upon my return home to the people for whom I fought and suffered, I would be repudiated!”

He never got a response until more than 50 years later.

And Richard added, with a smile, “They said, ‘would you accept a lifetime membership, all paid?”

“And I said ‘Sure!,’ without asking for an apology or any explanation.”

He believed with that kind of attitude, we would never end war.

“You have to let go,” he explained.

After the war was over, just like all Japanese Americans coming back from the camps, Richard had trouble starting a business—a jewelry store—downtown. The store was vandalized three times and he could never get insurance. But during this hard time, he enjoyed a baseball club where he met No-No boys.

“At first, I thought they were horrible. Why did they act like that? But as you get older, you know who else to fight. They were feeling, ‘You took my freedom away so why should I fight for you?’ They were Kibei [Nisei raised in Japan] and had some problems within their families. It was difficult for parents to keep the peace there. The war tore their families apart,” explained Richard.

Now he recognizes that they were fighting for the same thing—their basic rights as Americans—in different ways.

“I promised myself to go to Japan when I turned 65 years old,” said Richard.

He went there in 1977 but didn’t have a good experience. He encountered reverse racism there.

“The second time was better… I went with my wife and tomodachi (friends),” he said with a big smile. They took a cruise around Australia, Taiwan, Hong Kong, Japan, and Hawaii in 1991. He fell in love with cruising ever since.

“When you get old, it’s hard to move around, but a cruise is like home.”

And Richard is looking forward to the next trip to Hawaii to attend the 442nd reunion in April.

“Anything to say to a young audience?” I asked.

He answered, “They didn’t know about the 442nd. Now teaching about it is mandatory in schools in California. That’s very good.”

And then Richard added, “One good thing this war did was scatter Japanese. Consequently, they are all over in 50 states today.”

He said Caucasians thought Japanese were too clannish.

“It’s good to keep the culture but it’s also important to mingle (with other races).”

Throughout the interview, I felt that Richard always wanted people to get to know and to get along with each other. His way to contentment is to just accept the way things are and how people are. And that is the way to find peace of mind, as proven by 91 years of his life.

Editor’s note. This article is reprinted from The North American Post-Northwest Nikkei, April 12, 2003. We will re-run the 13 interviews in the series monthly across the next year.