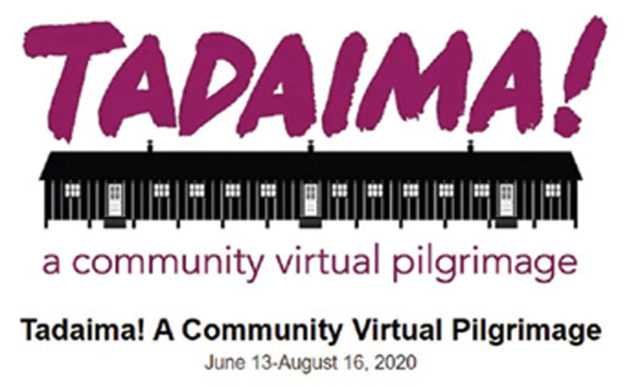 This summer, owing to the coronavirus pandemic, none of the usual multi-day annual pilgrimages to the various Japanese-American internment camps are taking place. Locally, the best known of these are trips to the Minidoka camp, Idaho, and to the Manzanar camp, California. The former is where Seattle JA’s spent much of World War II; the latter is where Bainbridge Island JA’s were first sent.

Instead, a special Tadaima Community Virtual Pilgrimage series has sprung up as a new part of the centralized JA pilgrimages website (jampilgrimages.com). Each week since June 14, the virtual pilgrimages pages have featured a well-organized series of documentary films, workshops, and the like. All of this content is slated to remain accessible until August 16, except for the live events, which ended Saturday, July 25.

What have been my impressions? First, it is perfectly all right to arrive tardy to the series, essentially a film course in JA history, as I did. Just be prepared to quickly jump back into serious college-student thinking and note-taking mode.

Of the “Opening Ceremony” offerings, I watched “Manzanar” (1972, Robert Nakamura, 16 min.). It is a firsthand description of the desolate place the Nisei filmmaker arrived when he was six.

Among the Week 1 “Immigration and Settlement” offerings, I added:

“Gannenmono” (2018, Japanese Cultural Center of Hawaii, 7min.), the story of the first Japanese who immigrated to Hawaii in 1868.

“Shizuko’s Quaker Quilt, the Kindness of Others” (Emiko Omori, 2018, 3 min.). This tells the story behind Satsuki Ina’s mother’s ratty quilt that the California Sansei activist nearly threw away.

In viewing these films, even though I was familiar with all topics, I found that each filled in nuggets of information I hadn’t grasped before. Who knew that the Wakamatsu Colony was funded by the Aizu clan, a holdout samurai enclave, as it was being crushed by the Japanese Imperial army? That the bilingual stone gravestone for the young girl, Ito Okei, who died from fever (cholera? malaria?) on the former colony’s farm after the other settlers gave up and left, had been the key to relocating the long lost colony? That at Manzanar, the names of workers are written in the remaining concrete foundations of buildings? For example, there is a clearly written “Tom Fujisaki, 10/8/43.” Do his descendants know it is there?

Throughout, viewers from Japan should not feel left out, for the settlers and history flow back and forth across the Pacific. Moreover, Japanese-bilingual viewers will get more out of many films than most, for they can also read the documents and gravestones, and understand the background conversations that largely serve only as settings for Americans.

The main beauty of the virtual pilgrimage series is that others have taken the time to organize the films and live events in a logical way. While some of this content is available in local public libraries, not all of it is. Moreover, no library in Greater Seattle is open at the moment!

I see the significance of the series as threefold. First, it greatly lowers the bar to learning Japanese-American history. No longer is it necessary to turn the pages of dusty books or wade through intimidating online JA fare. All we have to do is to meander through the series’ individual offerings. The net effect is an uplifting refresher course that makes us stand taller and more knowledgeably.

Second, the series will help us fill the coming weeks more constructively. Like most readers, I am starting to go stir-crazy after spending the bulk of five months at home. As it took an entire Sunday afternoon for me to only skim the surface of the first week’s content, it is clear that viewing the remaining series will add structure and depth to my days.

Third, the series provides perspective on the smallness of our current woes. It reinforces what I felt at the start of the coronavirus pandemic: I am not going to let the virus get me. My grandparents and parents went through too much grief to lose me to a virus through my own carelessness.

Undoubtedly, building the international network necessary to pull off the virtual pilgrimages series will lead to other collaborations down the road. I look forward to receiving emails describing those efforts in my in-box.

“Tadaima! A Community Virtual Pilgrimage” is a collaborative undertaking, involving representatives from many different contingents of the Nikkei community, as well as scholars, artists, and educators committed to actively memorializing the history of Japanese incarceration during World War II. This online event is free and open to public. Register to enjoy the program at: https://www.jampilgrimages.com/virtualpilgrimageregistration