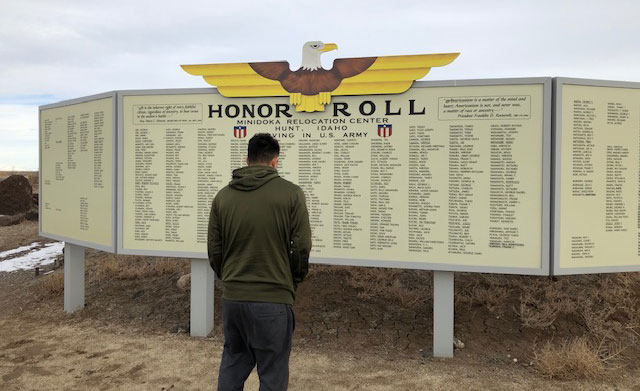 by Mick Matsuzawa, The North American Post board member

During the first week of the new year, my son was scheduled to travel to Oklahoma City for a military commitment. I decided to join him. Rather than fly, we chose to take a road trip. Traveling by way of southeast Oregon and through the state of Idaho, I happened to glance at a map posted in a rest area. It showed that Minidoka was just a few miles from the main highway, in the same general direction that we were heading. A quick detour was in order. From Interstate 84, we drove State Route 25 to Jerome, Idaho and then on to Eden. The road heading to Minidoka was narrow, a bit twisty, and potentially harrowing, especially if another car happened to approach or if a cow decided to jump in our path.

January 2020 is the beginning of a new decade:  Nezumi-Doshi, the “Year of the Rat.” According to the lunar zodiac, it will be an auspicious year, known for its fertility and social networking. Ironically, when we arrived, the surroundings did not seem close to being full of life nor was there a lot of socializing taking place. In fact, we didn’t see anyone around. The bellowing of distant cattle made it seem more desolate and the terrain was extremely flat. The distant, snow-covered mountains looked like they were a million miles away. My first impression of the Minidoka Historical National Site was that the surroundings were especially cold and windy, which was probably fitting for what has become somewhat of a forgotten place to many. At one time, it was one of the largest cities in Idaho, with an estimated population of slightly over 10,000. With that backdrop, it is hard to imagine a place that would need armed guards and prison fencing. Where would anyone run to? During the winter, the ground is obviously snowy, wet, and muddy. A person would probably die of hypothermia in a few hours if they managed to escape. If they tried to flee during the summer, they would probably die of heat stroke. So, why all of the precautions?

Traveling to Minidoka during the winter is obviously a different experience than visiting in the warmer months. The visitor center was closed when we arrived, but the 1.6 miles of trails were free and open to the public. Even with limited access, it was worth making the side trip to get there. It gave me the opportunity to explain this valuable piece of history to my son as well as to pay tribute to those who had to endure the experience of living there.