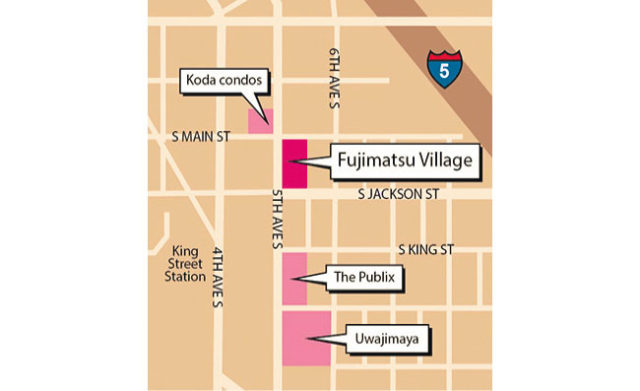 The Moriguchi family and Da Li Development USA, an offshoot of Da Li Development Co. of Taiwan, have entered a partnership to build a 27-story apartment/hotel complex on the northeast corner of 5th Ave. and Jackson St.

The development will be called Fujimatsu Village in honor of Fujimatsu Moriguchi, who founded Uwajimaya in 1928. The building will be the tallest in the International District. The plan is for the lower floors to have about 40,000 square feet of retail and commercial space; a 200-room hotel of the 3.5 to 4-star variety catering to business travelers would extend to the 12th floor; and about 160 condos would be on floors 13 through 27.

The Moriguchis have worked with Da Li before, selling property to the Taiwan company for $5.5 million in 2016.  That lot is now the site of the Koda condominium development on Main St. and 5th Ave. But while the Koda building is wholly owned by Da Li Development, Fujimatsu Village will be a long-term partnership between Da Li and the Moriguchis.

The Fujimatsu Village project is about two years from breaking ground. Before that, Da Li will present its plans to the International Special Review District later this fall.

Tomio Moriguchi, publisher of this paper and the retired CEO of Uwajimaya, will have a say in the retail businesses moving into Fujimatsu Village. He has been selecting businesses for the Publix building just a couple of blocks away, bringing in such businesses as Dough Zone, Momosan Ramen & Sake, and Hood Famous Café + Bar, for example.

At one point, Tomio Moriguchi discussed having Pritzker prize-winning architect Shigeru Ban design the property, but now the architect will be Seattle-based MG2.

A Moment in Repose