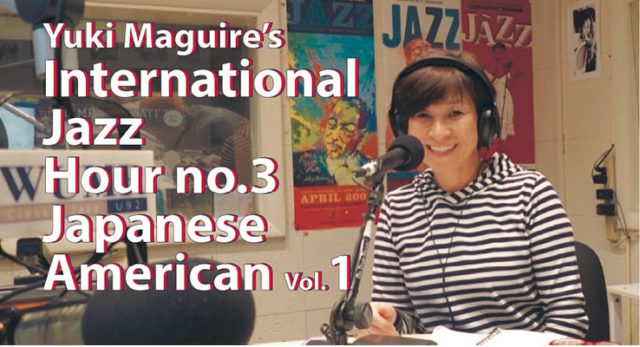 “Hello. Konnichiwa. Bon Jour. Ni Hao. Gutentag. Buenas Dias. Welcome to Yuki Maguire’s International Jazz Hour.” Thus begins Yuki Maguire’s jazz radio show on WUMR from the University of Memphis. Maguire, an expat originally from Akita Prefecture, has settled in this famously musical city because of her husband’s job with Federal Express, which is headquartered there. Her twin sons studied jazz at the renowned Stax Music Academy and released an album as The Maguire Twins last year. The album, Seeking Higher Ground, rose to No. 32 on JazzWeek’s bestseller chart last summer.

Around the time that her twin boys were producing their album early last year, Yuki decided it was time for her to get into the jazz scene. “It is very hard making a living as a musician, so I wanted to help them,” she says from her hometown in Akita, which she was visiting for Obon. “I began learning about jazz, and the more I learned, I thought, I should help everybody (in the jazz industry). We have a station in Memphis that plays jazz 24/7. From midnight to 7 in the morning, they stream jazz with no DJ. I suggested that I could make a program, and that’s how I came up with the International Jazz Hour.”

Yuki has led a very international life. She worked for KLM Royal Dutch Airlines, lived in Amsterdam for a time, moved back to Tokyo once she got married, then raised her three sons in Hong Kong, where they went to international schools. Finally, they all moved to Memphis when her husband was transferred. Along the way, Yuki has studied eight languages (she says jazz is her ninth) and traveled to about 70 countries.

For her radio show (you can find past shows on Youtube by searching “International Jazz Hour”), Yuki researches how musicians in different countries interpret jazz. She has aired two shows on French musicians and is putting together shows on jazz in Argentina, Sweden, Italy, Catalonia, and Eastern European countries. She’s also aired shows on Memphis jazz. Because of often tense race relations in the city, the music scene tends to get divided into black and white. But Yuki says, “I am not white, and I am not black, so I can talk about the scene in a different way.” She thought it was important to celebrate Memphis jazz to let the world know that so many jazz giants came from Memphis. Almost all of them had to leave the city to make their names elsewhere.

But perhaps the shows that have affected her the most are her two hours on the jazz of Japanese American. Jazz drummer Akira Tana introduced Yuki to many Japanese American jazz musicians, including our very own Deems Tsutakawa.  As she listened to and researched Japanese American jazz, she was struck by the individual stories and how many of the musicians would reach to Japan for inspiration. “It’s American music, but they have their own heritage,” she says. One of the musicians she featured, Grammy-nominated Anthony Brown, has a Japanese mother and an American father. “His music is really interesting because he incorporates other Asian instruments – not only Japanese, but Chinese and Indian.

“In Japan, we want to learn about Western music,” she continues. “But Japanese Americans put more Japanese elements into their music. For example, Mark Izu of the Bay Area puts more Noh elements into his jazz. Kenny Endo is a taiko drummer who I heard in Hong Kong. It is amazing music, but I didn’t know I would come across his music again as jazz. A lot of them have faced discrimination or spent time in relocation camps, and that may have triggered their impulse to put more Japanese elements into their music.

“I knew vaguely about the relocation camps and the American government admitting wrongdoing later,” she says. “It’s important to learn from this history.”

Yuki’s radio show is bilingual. She describes artists and their songs in Japanese and English. But she keeps the talking to a minimum so that the music can speak for itself. “Jazz is a tool to express ourselves,” she says.  Her show airs Tuesdays and Thursdays 5-6am (CST) on WUMR (https://www.memphis.edu/wumr) and archives can be found on YouTube.

History of “The North American Times” 1