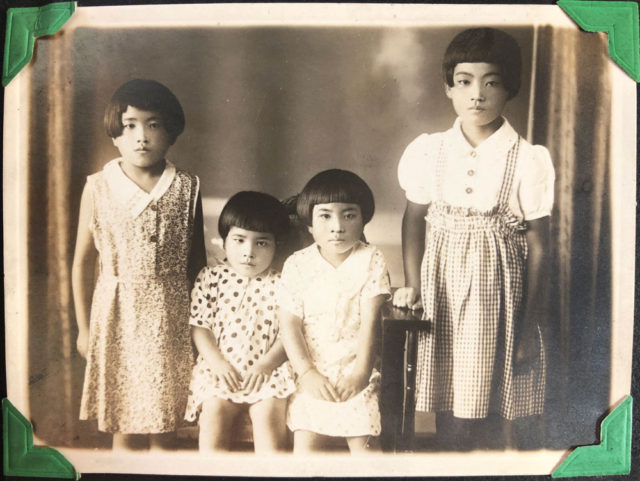 “Oh, this photo is evaporating. It needs to be copied right away,” says my friend Michael Sullivan.

We’re looking through a black and white photo album together, owner unknown. A mutual friend and antique collector has given us the album and asked us to look for the right place for it. Our friend bought it from a swap meet in Tacoma; the previous owner at the swap meet said that he found it at a Goodwill in Tacoma. (I would be happy to return the album to its rightful owners, if they read this piece.)

One of the photos is showing signs of silvering, which Michael says is a bad sign. He explains that normally, the silver nitrate used in photo processing is suspended in a gelatin which shows the image. Due to improper storage close to air pollution or moisture, the silver nitrate will come back to the top of the gelatin, and can begin to convert back to its metallic state.

Ironically, what this looks like is an angled ray of sunlight appearing through the image at the hem of a young schoolgirl’s dress. It’s light that’s becoming an absence.

Michael and I have collaborated before on several public history projects, but this one involves solving a mystery.

There are many levels of questions here, and there are just enough tantalizing clues that point to a possible location and time period. Who is the woman who appears so frequently in the album, and especially on the inside cover?

Though all of the photographs are black and white, the album seems to contain material from before World War II and after World War II. There are changes in the clothing, and in the car styles. Several photographs are portraits of women in kimonos, others are of schoolgirls in uniforms. The album does not seem to be in chronological order; some of the newer photos (with more contemporary clothing styles) appear next to prewar photos, as if someone decided there was not enough space and wanted to add them to existing pages.

A few photos carry the raised imprints of photo studios on them: one in Seattle, one in Portland. I know that photography was a major pursuit and pastime for Japanese Americans before World War II especially, and hope to learn more about these studios.

There is one photograph of a young Japanese American teenage girl in Tacoma near Stadium High School. Though the album was found in Tacoma, this photo is the only visual evidence we have of the album’s connection to Tacoma.

There are several photographs of a young Japanese American woman by a large, fancy automobile and the sign “Seattle First National Bank” in the background. In other photos, the same woman and another woman can be seen walking next to that same building. Another picture seems to be of the Governor Hotel in Seattle’s Chinatown/International District.

The landscape in several of the photographs, with tall evergreen trees, Michael says, looks like the greenery of Portland.

There’s one picture of a white man in uniform next to a bus; he appears to be the driver. The bus line is one that serves Twin Falls, Idaho, which is the line that served Minidoka. This might be the only photo that even hints at camp history. There is no writing on the back of this picture.

Remarkably, the majority of the people in the photos are Japanese women, Japanese American young women and girls in kimonos, women in business suits, in Japanese schoolgirl uniforms, in Western blouses and skirts. I think about how rarely I see a collection (public or private) that’s so focused on everyday Japanese and Japanese American women.

While looking at the album, I’ve also thought about the possibility that the relatives of the women pictured here may not want it back. The memories may be too painful, or the language barrier may have been too great. The urge to donate in oceans of decluttering are understandable. So my intention is not to write in order to shame the owners of the album, if they don’t want it anymore.

However, I believe that there are many other photo albums like this one in Japanese American attics or basements. I think about my Auntie Nesan’s scrapbook and photo album, which one of her friends so beautifully and lovingly created for her. Some of these items would be heaps of paper for the recycling bin or sold in a random antique store (or website) if her friend had not taken the time to ask her about the stories behind the photos and items. These are priceless pieces of our family history, but having them explained and curated is key.

I want us to think about these albums that are keepers of history. What kinds of albums do we have stored in boxes? Further down the road—what kinds of albums or history will we pass down to our children with so much of our lives in digital formats? These digital formats are valuable from a preservation standpoint, but they may also become inaccessible if software becomes obsolete. I don’t suggest an entire return to paper, but holding these images, I hold evidence that paper can survive quite a bit.

I don’t know if this photo album tells an important historical story. Several of the photographs in Seattle and the one of Tacoma seem to carry historical value. I plan to donate the album to a museum or historical society at the end of this year (2019) if no relative comes forward. Next week I will speak to people at the Tacoma Buddhist Temple to see if anyone knows the rightful owners.

I do know that the album tells a story that was important to a woman who probably lived in Seattle or Tacoma. And the album has done a remarkable job holding that story for decades, surviving who knows how many moves or purges, through swap meets and charity organizations. I feel I owe it to that survival, that story, and that woman to see if I can find the album a proper home.

History without the gift of attention and curation is history, unmoored—and can be become a history untold.

[Editor’s Note] This article was originally published in Discover Nikkei at www.discovernikkei.org, which is managed by the Japanese American National Museum in Los Angeles.

Tamiko Nimura is a Sansei/Pinay writer, originally from Northern California and now living in the Pacific Northwest. Her writing has appeared or will appear in The San Francisco Chronicle, Kartika Review, The Seattle Star, Seattlest.com, the International Examiner (Seattle), and The Rafu Shimpo. She blogs at Kikugirl.net, and is working on a book project that responds to her father’s unpublished manuscript about his Tule Lake incarceration during World War II.