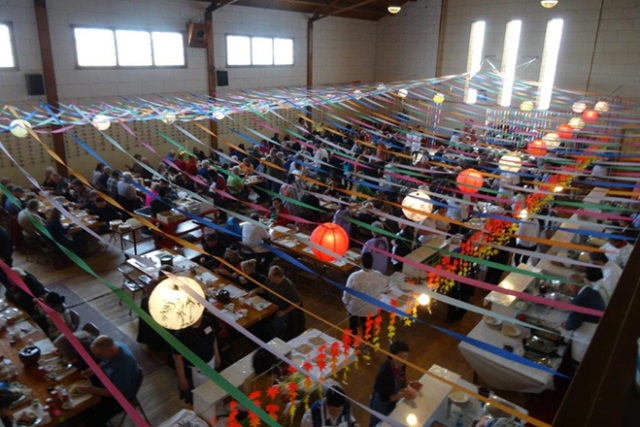 I checked on Google right after wake up about the weather and traffic conditions going over Snoqualmie Pass to see if I could get to Wapato Buddhist Church’s sukiyaki dinner in Yakima. It said the Pass had 90 % chance of snow and would get 1 to 3 inches on the ground. Tomio Moriguchi, my friend, came with his 4 wheel drive. Eri Takahashi and I joined his car at Factoria. Tomio said he came back from China and Japan only five days
before yet he was full of energy to sit at the driver’s seat all the way to Yakima fighting and enjoying the scenery of a snowy world. As we went through Ellensburg, we talked about Stewart Anderson’s Black Angus Ranch and his home on top of the hill which I once
visited. Then the weather turned like spring and by the time we arrived at Wapato, we didn’t need overcoats. Tomio said he used to come to Yakima River to fish trout. It’s so tasty because the water is cold. He was also recollecting his memory of visiting his friends and picking fruits from orchards in Yakima Valley. But this time, it was the first visit to the Buddhist Church annual fundraising Sukiyaki Dinner for Tomio and Eri. We drove five hours roundtrip to see with our own eyes what “community service” means on a grassroots level. For me, this was my third visit after the 50th and 55th Anniversary celebrations. This year, it is the 57th and the event will never die, thanks to the passionate goodwill of the local community.

Wapato is a small town situated ten minutes south of Yakima off Ellensburg on I-90. Yakima means “beautiful land” by Tahoma Indian language. For Japanese immigrant Issei who settled there, it meant a vast land where even horses get toasted by sultr y heat. Currently, the Wapato population is about 5,000, of which 76% is Hispanic; you can practically call it a Mexican town. Japanese families are few, after the 3rd generation moved to urban areas. First settlers have been in the area since as early as 1885. Around 1905, many Japanese people also began to migrate to the town mostly moving from Hawaii. In 1916, “Japanese Town” was developed with more than 1,000 Japanese living in Yakima Valley, mainly around Wapato. The community soon became a center for Washington’s Japanese population, second only to Seattle.

My friend, Mr. Taki, originally from Shiga Prefecture who grows organic vegetables in Wapato helps this event every year preparing food all day. Another friend, third generation Japanese, Carolyn Harano (maiden name Takei), is also from Wapato. Her grandfather, Sakitaro Takei who came to Wapato in 1908, had mentioned in a Japanese immigrant history book that I have that Yakima Valley was covered all over with wild fields of sagebrush. He lived in a so-called tent house with no table or chair, used an apple box for a table. To take a bath, he had to boil the water and wash himself in a tub. Desolate land was changed to a rich soil by growing vegetables and fruits and running a cattle ranch by irrigation with the constant effort (sometimes 18 hours of work a day) by these Issei and Nisei people. Immigrant law of 1913 prohibited Issei from owning or leasing land as well as from obtaining American citizenship. Yakima Indians around Wapato gladly offered their land to rent out to Japanese.

Most Japanese were either Methodist or Buddhist. Japanese immigrants those days owed a lot to two local Americans, Esther Boyd and Dan McDonald, who had a favorable feeling toward Japanese who worked earnestly and loyally for America. When Japanese had to go to internment camp in Wyoming, Esther and Dan became the owners and caretakers of the Buddhist Church maintaining and protecting the building and stored personal belongings for internees. Esther who owned a hardware store in downtown was boycotted and the building was marred with graffiti from hatred; but she made no secret of her support. As Internees became free to come home to Wapato in 1945, Esther and Dan returned their property and helped them start all over again. I truly feel grateful and my heart warms when I learn of this kind of story in Wapato. Friendship and mutual trust existed beyond national interest as shown by this grand generosity and conscience.

I reconfirmed strong friendships beyond when our ancestors came, recognize that it still exists here, and believe it will be inherited in the future. This is American generosity and “Big Heart”. I heard from Mr. Dale Kaku of Seattle who comes here to volunteer from Seattle that only five members of the Church remain now and 1,700 sukiyaki dinners including lots of take out is served in one day. Most supporters are local people including many from Moses Lake. Japanese and American farmers donate their farm products in kind. In the church, I talked to two American ladies. One lady said she lived in Sasebo, Kyushu for five years. Another lady said her daughter lives in Iwakuni. Everyone who comes here has an invisible link with the Buddhist Church. As we left the Bazaar, we saw a long line of people who were waiting at the entrance. On the way home, we stopped by at a coffee shop to wait for the opening of I-90 which closed because of a collision. We talked about why all these American people help the survival of a Buddhist Church where only five members exist. Our conclusion was Japanese Issei and Nissei worked hard to assimilate in the American community and their legend is strongly alive. People show respect to such a way of life. Tomio said Japanese immigrants tried hard to grow rice but the average annual temperature was a little too cold and dry.

Eri said sukiyaki here is different from what she knows. I told her Japanese immigrants created their own sukiyaki by including celery and bamboo shoots. Originality and f lexibility are most important elements to live well in America.

Tomio said no matter what, American people love sukiyaki and tempura. As a restaurant consultant and producer, totally agree with his opinion. As a New Issei, I am determined to respect our ancestors’ efforts and do something I can for the community to which I belong.