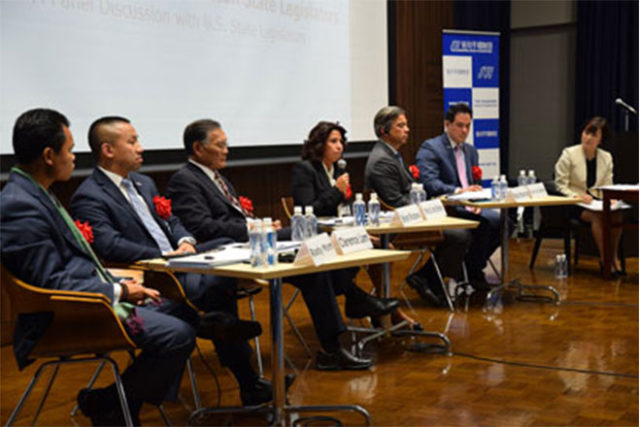 Washington State Representative Monica Jurado Stonier traveled to Tokyo, Osaka and Kyoto from September 29 to October 7, as part of the 2017 Asian American Leadership Delegation (AALD) program with 5 other state-elected officials who have diverse Asian American backgrounds. Stonier is Mexican American and Japanese American, whose uncles who fought in the 442nd RCT in WWⅡ. She and other State Legislatures exchanged ideas with Japanese political and government leaders, business executives, nonprofit leaders and academics, creating networks that can mutually benefit the U.S.-Japan relationship.

AALD is funded by the Sasakawa Peace Foundation and implemented by US-Japan Council (USJC). This year was in its fourth year of the program and included meetings with Tokyo, Osaka and Kyoto city legislators about 2020 Tokyo Olympics, potential 2025 Osaka World Expo, and Kyoto’s efforts in tourism and beautification. Attending legislatures also met business leaders from national and regional business associations and corporations such as Hitachi and IBM Japan. The delegates also spoke at a panel discussion in Tokyo titled “Diversity in Leadership: The Journey of Asian American State Legislators.”