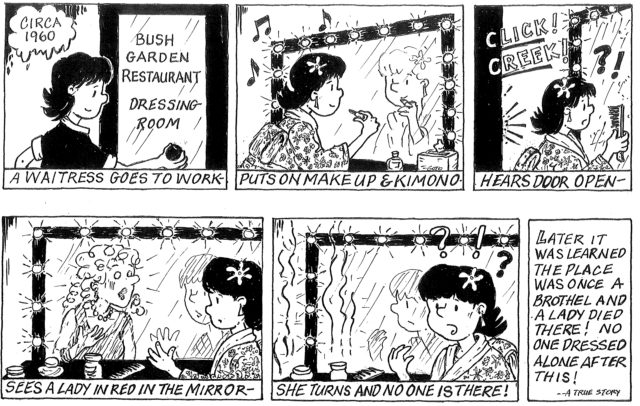 Is there a ghost of a friendly, but tarnished “Lady of the Night” locked within the walls of Bush Garden Restaurant?

In its very early days, the building had once been a brothel and gambling hall. There was a story about a young prostitute who died after being locked-up in one of the third floor rooms. No one remembered the cause of her death; some believed her soul still walked the halls.

People have asked me if I had ever encountered her or any ghosts while doing business for 47 years at the restaurant. While I have not – I am writing three incidents of paranormal events that others experienced at our restaurant- perhaps it was the “Lady” or her patrons.

Giggling voices resounded as three Bush Garden waitresses climbed the stairs to their third floor dressing room. Shizuko opened the door and reached for the switch that held one light bulb in the middle of the ceiling. Racks of kimonos and obis (sash) hung from two steel clothes racks.

The dresses were a myriad of patterns and colors. The obi’s colors matched each kimono – reds, blues, pinks, lavenders, greens and yellows with designs of flowers, leaves, and stripes. A large floor-to- ceiling mirror was attached to the far wall. The light bulb was minuscule in contrast to the large open room. It cast shadows and gave out an eerie feel.

Shizuko, Reiko and Helen undressed and donned their kimonos. They sat down on small stools to put on their white tabi socks and zori’s (Japanese slippers). They stored their belongings in little wooden alcoves attached to the wall. They shut off the light, closed the door and went downstairs to work.

Nobuko climbed the stairs. She was alone as she entered the dressing room and turned on the light. She quickly dressed and was fixing her hair when she glimpsed another person in the mirror. She thought another waitress had silently arrived.

She felt a sudden chill and her hair stood up against the nape of her neck. She stared at the reflection of a heavily made-up woman. She was wearing a long red dress – not Asian.

“Who are you and what are you doing here?”
Nobuko stared into the mirror. The light bulb above began to blink on and off. The reflection became hazy and suddenly the woman disappeared. Nobuko nervously glanced around. Was her imagination running wild? Was she dreaming? No, she was wide-awake! She ran out of the dressing room –terrified! She was out of breath as she relayed her sighting to her fellow workers.

“I think there is a yurei (ghost) in the dressing room. I felt a cold breeze on my neck. At first I thought one of you had come in. The reflection was of a woman around thirty – dressed in a long red evening gown. She was hakujin (white). As I was talking to her she vanished into thin air.”

After that incident, the waitresses refused to go to the dressing room alone. Everyone was traumatized- even when not all had encountered the so-called ghost.

A bar guest went to the downstairs ladies room. She remained calm as she reappeared in the cocktail lounge. She approached Shelley, the bartender, and told her she thought there might be a ghost in the restroom.

“I was in the first stall – the closest from the bathroom door. The restroom was empty when I entered. Suddenly the empty stall doors began to swing open and shut. I ran out thinking it was an earthquake. I felt something cold pass over me. I did not feel threatened. I think it was a ghost.”

Shelley had replied, “I sometimes feel a presence in the restroom too. The room suddenly becomes icy cold. It doesn’t scare me but I know it’s not normal. I think it’s a friendly ghost.”

When Shelley told me about the bathroom episode, I had replied, “Maybe the dressing room ghost has moved downstairs. The third floor is no longer in use and locked. The ghost may have become lonely and relocated to the downstairs women’s restroom.”

Ghost stories you say? Maybe- and maybe not!

Joan Seko, her husband Roy and his brother owned and operated the land-mark Bush Garden Restaurant in Seattle’s International District for 47 years.