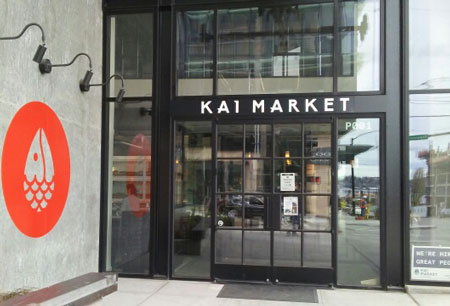 Uwajimaya’s brand new Kai Market opened on May 3. The new store is located on the ground level of 400 Fairview, the new office building in the South Lake Union area busy with redevelopment. Kai Market will serve seafood-oriented Asian groceries and deli food. The building, which faces the I-5 ramps and the Seattle Times office, also houses a locally owned cafe and a bar on the ground floor. The market features a giant fish tank that keeps the seafood fresh, adding a new dimension to the established image of Uwajimaya. Many in the local food industry say the new market is perfectly situated to draw a huge lunch crowd. “If this goes well, we would like to continue expanding on the new brand,” said Uwajimaya CEO Denise Moriguchi, who has high expectations for lunch demand.

Uwajimaya constructed an apartment/commercial retail building called Publix next to its Seattle store. The 125-unit apartment occupying the top floors is operated by Uwajimaya, and is currently more than 90% occupied. The 12,000 square feet of space on the ground floor will be a commercial retail space. As of April, Dough Zone Dumpling House, a popular dim sum restaurant, and Great State Burgers have signed lease agreements. Both restaurants are scheduled to open their doors within the year. Moriguchi said that as long as the businesses are local, whether they are Asian or not is unimportant, and that Uwajimaya will continue seeking businesses in accordance with a diversifying International District. Mie Moriguchi, who is in charge of the project, said that once the Publix project is on track, the company will explore plans to develop the adjacent blue-tiled former Uwajimaya store. The new generation of leaders at Uwajimaya can be counted on for expanding the business.

Understanding the sequence of returns risk: Why timing can be important in retirement