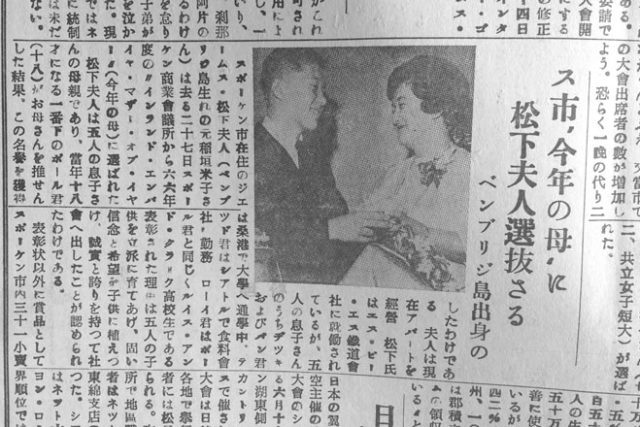 Matsushita is mother of five sons, and the youngest son, Paul, 18, recommended his mother for the award to the organization. Recently she has started managing an apartment, whileand her husband works for Spokane Portland Seattle Railway. Among their sons, Dick and Van, are college students in San Francisco, Ted works for a food company in Seattle and Roy and Paul are studying at Lewis and Clark High School.

She received the award for having raised her five sons well, for helping them to develop their faith and ambition and sending them out into society with sincerity and pride. She was also presented a gift certificate of $400 sponsored by 31 local retailers in Spokane.

Matsushita is related to Mrs. James Horishige and Mrs. Yu Matsushita of Bainbridge Island. The photo on the right is Yoneko Matsushita and her son Paul.