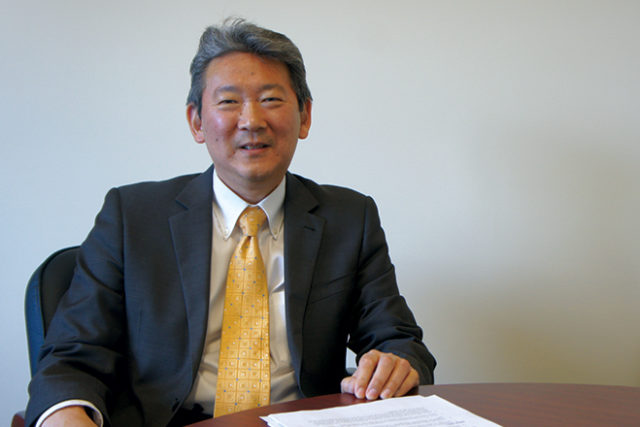 The homeless issue in the Seattle area has proved a serious issue. Mark Okazaki, a local-born Sansei (third generation Japanese American), has been committed to solve this problem as the executive director of Neighborhood House since 2000. The Neighborhood House is an organization offering various kinds of programs for homeless people and low-income people since 1906.

What was the effect of the Japanese Community on your childhood?

“The Japanese American community was always my part of identity. I go to Japanese Baptist Church, and I had a strong sense of being third generation of Japanese American. In junior high school and high school, I have many friends who are Sansei. We share the experience and feeling as Sansei.”

How did you get involved with helping poor people?

“It was probably when I was a college student that I became interested in social justice issues and racism and civil rights. In the 1970s, after the civil right movements, there were many Asian students who really believed that racism affected Asian people, too. They stood up and fought against those kinds of forces. That was interesting to me.

Please tell us about the homeless programs Neighborhood House is offering.

“One of the programs is called Eviction Prevention. This program provides some amount of money to make up a difference of rent fee to prevent a person from an eviction and becoming homeless. Once you are a homeless, it is hard on a family individuals, hard to find a new housing, very disrupting if you have children, rent history. So we’ve been doing that kind of program for many years.

The other program is Emergency Shelters. They are safe, warm and dry and you can sleep there for the night. We have a lot of those in Seattle, King County. But it is not a best situation. Especially if you have children or you are younger adult.

Another program is called Rapid Rehousing. We work with homeless people to find an affordable rental housing and we often pay the first month rent and last month rent, damage deposit to get them into the new rental housing as fast as possible. We keep working with the family so that they can earn more money to close the gap, so at a certain time, they are out of crises less than six months.

This is important thing that those programs don’t work for everyone. A lot of people who live on the street have mental illness, so Rapid Rehousing is not the right solution for them. They need something else. It is about understanding of all of people experiencing homelessness and their needs.”

How can the Japanese American community get involved with the homeless issue?

“Certainly, a lot of these non-profit organizations can use both volunteers and donations. And I know the faith communities like Japanese Baptist Church, are doing things to resolve homeless. So through institutions such as churches and non-profit organizations, the community can be helpful in terms of not only direct help but also through supporting organization such as neighborhood house. There are many different ways that individuals can help.”

Do you have any personal experience with homelessness?

“My older brother, who has a mental health issue and he was a homeless. In 2013 my brother was a homeless for a while and he was really struggling. I was able to help him. He now lives in affordable housing where has an understanding for people who have mental illness.

These issues touch on all of us. A lot of times we Japanese American people don’t really like to talk about this ’embarrassing’ issue. But it touches our community.”

What do you want to achieve through your job?

“Unfortunately there are always people who are in crisis. We want to be a place, where people in crisis come in and we want to help them as their safety net.

But that is not enough. Because we want to help those individuals to become getting back on their feet and self-sufficient. So through helping them finding a job, affordable housing, helping their children succeed at school, helping people out of poverty through education, we want to create an opportunity for people to become more self-sufficient.

People in crisis cannot think about job or housing, so once we solve the problem, then we help their employment and housing and education.”

Neighborhood House will host an annual breakfast fundraising event on March 23 celebrating the 110th anniversary of the organization. More information can be found at www.nhwa.org/index.php.