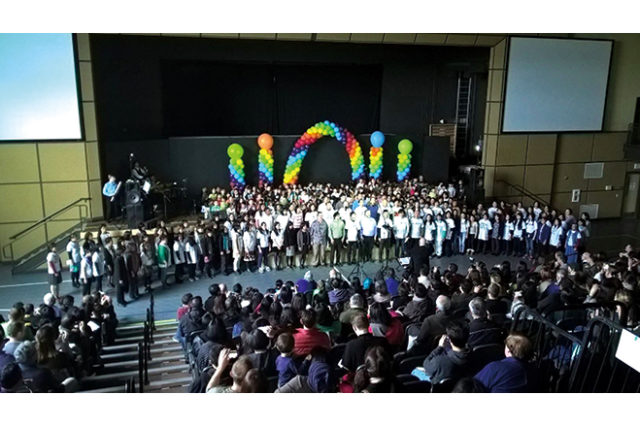 The local community held commemorative events to reflect the fifth anniversary of the Great East Japan Earthquake on Saturday in Seattle and on the Eastside on Sunday.
The Japan-America Society of the State of Washington hosted “Shout out to Japan: Remember, Repair, Prepare” on Saturday at Teatro ZinZanni to share messages from the Tohoku area and the importance of the local preparedness with the possibility of a mega-earthquake in the near future.

Songs of Hope, a Tohoku support group of musicians, artists and local residents, also held its final memorial concert on Sunday at Willows Preparatory School in Redmond. The group organized its Children’s Choir and Chorus of Hope of about 250 volunteer singers including Consul General Masahiro Omura to perform and share messages of support with Tohoku. Despite the stormy weather, over 700 supporters attended the fundraiser, according to Fumi Tagata of Songs of Hope.

“This is our final annual concert but we have seen and successfully created a new connection and supportive community through our five years of activity,” she said. “We will continue to develop this community network and to support areas devestated by the earthquake through music.”

The Great East Japan Earthquake and tsunami on March 11, 2011, killed over 18,000 people, mainly from the coastal area of Tohoku, and caused the Fukushima Daiichi nuclear disaster. Seattle’s local community met together the day after the disaster and built a coalition to work on Tohoku relief activities. Over the last five years, various community groups have continued the effort using their own networks with the Tohoku area and sending messages that supporters have not forgotten the disaster and the people who need help.

In facing these activities, Tateo Teramoto, director of the featured musical video “100 Ways to Say Thank You” and a special guest at Saturday’s event, said that he wants to share messages and appreciation for the generous support that Tohoku residents have received.

“I want to say ‘thank you very much for your support’ on behalf of those who have suffered from this disaster,” Teramoto said.