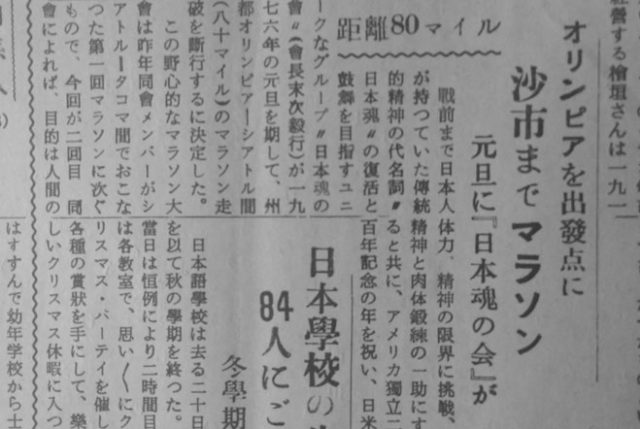 A Japanese group that encourages traditional Japanese spirits will hold an 80-mile run from Olympia to Seattle on New Year’s Day in 1976.

The Japan Tamashii no Kai (Japanese Spirits Group) hosted its first running event from Seattle to Tacoma last year, making this the second event. Led by Takeyuki Suetsugu, the group encourages traditional Japanese spirits through challenging each other’s physical and mental limits, supporting discipline and physical development, and promoting mutual understanding between the United States and Japan to celebrate the U.S. 15bicentennial.

The 20 group members will meet at 6:30 a.m. on Jan. 1 at the State Legislature in Olympia. After a simple opening ceremony, they will start running to Seattle in what is predicted to be chilly weather.

The event is co-sponsored by Mamoru Sudo of Oriental Janitor and welcomes new participants. More information can be found through Mikado Restaurant, where Suetsugu works, at (206) 622-5206.