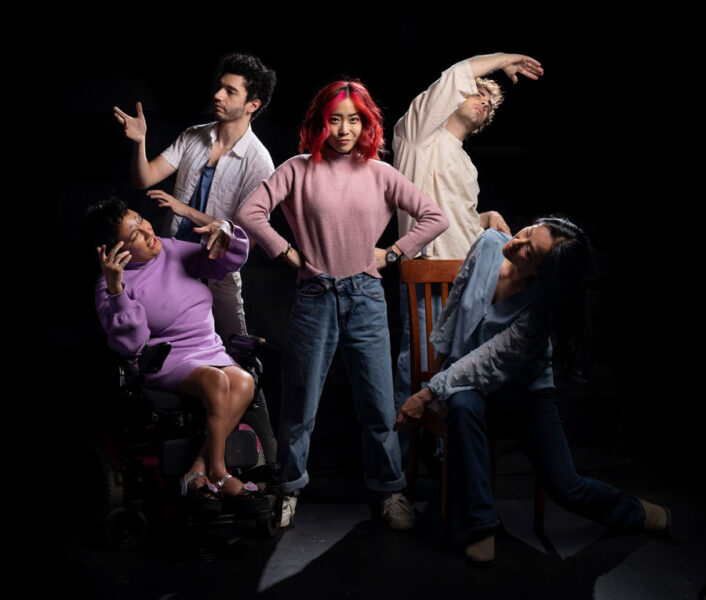 “miku, and the gods.” is a new play by New York-based playwright Julia Izumi. It debuted on Thursday, June 16, at ArtsWest Theater in West Seattle.

The preview performance the prior evening was quite good. Local actress Lola Rei Fukushima really carries the show, in their leading role as “Miku,” a 12-year-old who wants to become a god, but doesn’t know how to go about doing so. Naho Shioya similarly does well in her supporting role as Miku’s bilingual grandma.

This reviewer’s recommendation is to simply go see “Miku” because Fukushima is destined for greatness. Also, it is not every day that we have opportunities to assess the “state of art” of Asian American theater through seeing a play written and acted by three remarkable Nikkei women. Attending is especially appropriate if you enjoy seeing stories that incorporate cultural themes familiar to Nikkei of all ages. These include onigiri (rice balls), the way that traditional Japanese folk tales begin, multiple gods with varying areas of specialty, and occasional kitchen-Japanese conversation. (For the latter,  you feel privileged to be among the few present to follow what grandma is saying).

Other reasons to see “miku” are to simply support Asian American theater, and to help bring back this local arts scene. After the show, “Grandma” Shioya said she could see the Asian audience members from the stage. Live theater especially has been hammered by the pandemic.

The ArtsWest venue is also charming. If you sit in the front row of the “theater in the round” seating, you can nearly touch the actors walking by.

According to Fukushima, the show came together through playwright Izumi approaching the local AA theater group “Pork Filled Productions” for help with production and casting.

Regarding COVID-19 safety, the theater is making every effort to protect audience members. Two staffers checked for vaccination cards at the entrance. Moreover, audience members were asked to keep their masks on. Free masks were available for anyone who arrived non-masked.

Notes. If you miss “miku,” the next opportunity to catch local AA theater will likely be “She Devil of the China Seas,” by PFP’s Roger Tang (Aug. 11 – 27, Theater Off Jackson). The 15-member cast includes Kristine Ota, Archie Sugiyama, Tim Takechi and Carol Tagawa. More of Fukushima is on vimeo.com.

“Miku, and the Gods”