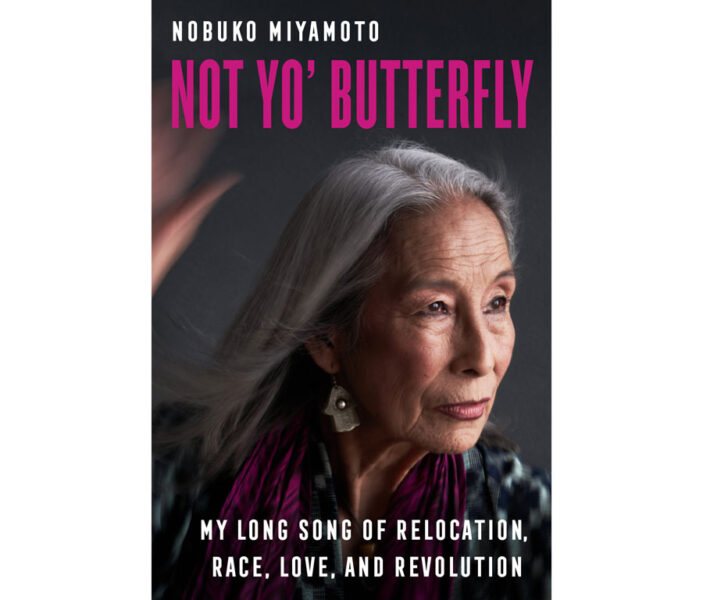 Despite the pandemic, 2021 was a landmark year for Great Leap Artistic Director and activist, Nobuko Miyamoto. Her autobiography, “Not Yo’ Butterfly, My Long Song of Relocation, Race, Love, and Revolution” was published in June by the University of California Press. Her double CD set, “120,000 Songs,” was released in February by Smithsonian Folkways and included new songs as well as re-recorded oldies. A “Nobuko Miyamoto Christmas Ornament” was featured in the Japanese American National Museum’s (JANM) holiday catalog (the previous year’s catalog featured an ornament honoring Yuri Kochiyama).

Looking forward to this year’s events: February 19 and 20, 2022, Nobuko will perform a live concert of “120,000 Songs” for Day of Remembrance at the Getty Center, cosponsored by JANM. Her interview will be featured on NPR’s program “Snap Judgment.” She is creating a new Obon piece and planning another “FandangObon” with producer Alison De La Cruz. She will also be featured in an episode of KCET’s “Artbound” in the fall.

After Detroit activist/philosopher Grace Lee Boggs advised Nobuko to write a book, she began working on it in small segments for six years. Her autobiography is divided into three “movements” like a performance. Each section covers a different “movement” of her life: childhood/dance training, political activism, and single motherhood/artistic life. She transitions from shy JoAnne (“JoJo” as a child) to Nobuko, finding her voice through political activism and performance. Her “Intro” poem sings, “I grew up without a song that sang me.”

“Not Yo’ Butterfly” is a story about resilience and struggle, about Nobuko finding her voice. It is about how the past civil rights struggles are connected to the present Black Lives Matter movement and current struggles. It expresses optimism despite the threat of global warming, pandemic, and political strife. Above all, it is about the love and support of family and community, which make life worth living.

We spoke via Zoom on December 2, 2021. This interview has been edited.

Why Asians Need a Voice:

I feel even now that Asians need a voice. They need diverse voices. They need to be heard, they need to be seen. And these last two years have been a testament to that reality — the violence against Asians and the easy riling up of these old stereotypes that made it easy for people to violate our rights and (not) see us as human beings. The metaphor of song is so we’re not invisible. We each have a song; we each have a story. We each have something to say.

On the Title of the Book:

The book was originally called “What Can a Song Do?” But the publisher didn’t think that was a catchy title. So then he pushed me to find something more provoking, I guess. Then I searched and searched and I finally went back to a song called “Not Yo’ Butterfly.” It was on the album and when he heard it he said, “That’s it.” And he said, “I like the Yo’.” That’s a black colloquial word. He said, “Because your life defends it. Your life stands up to that.” So that’s why we ended up with “Not Yo’ Butterfly.”

On Writing a Book:

What writing the book was really, was sort of a retreat for me and deep moments of reflection. Because in all these years of living and working, and being a single mother, and running an arts organization, I have not had time to sit and reflect on my work or my life. And having Grace Lee Boggs tell me it was time for me to write my book. She was again teaching me a lesson, I think. She said it changed her life to do that.

She was a philosopher and she had written other books. But when she wrote her personal story, it (not only) shifted something inside of her but it also shifted how people looked at her. And it has really helped me look at the big picture of my life as I enter my eighth decade. It was sort of a good way to look at my life as a whole. Which one rarely does, really.

The one thing that struck me about your early childhood memories was how vivid they were. At a very young age, you had very vivid memories.

It was a lot of trauma actually in those early years. Trauma of being uprooted with my parents. I think my parents felt it terribly. But a child feels it and sort of just goes along with it. A lot of those stories also are stories that my mother told me as well, because it affected her and for seven years I was the only child. And those years my father was working, so my mother talked to me a lot.

And I didn’t have a lot of playmates because we were moving around. So my mother she was company for me and I was company for her. And she expressed her anger about being put in camp. So I think that’s why I held onto some of those memories as well as I did is because it was part of her memory as well.

Your relatives said you resemble your great-grandmother Hatsu (in Japan).

Yes, and that was a strange thing. I went there (Japan) feeling and fearing that I wouldn’t be accepted as being a real Japanese because I was mixed. Even in the US here, most Japanese people don’t see me as looking like a Japanese person. So when I went there, I was prepared to be the outsider that I’ve always been.

And when they were so good to me in the family, you know, they cooked a beautiful meal and just showed us around. They were just so gracious. And before I left, one of the aunties who looked like my auntie (in the U.S.) said, “You look like your great-grandmother. You even move like her. Your gestures are like her.”

So that like freaked me out because here I thought  I was not really Japanese. And here I was with my real relatives who thought I was my great-grandmother incarnate in a way, coming to visit them. And so that was a deep experience for me. I’m so glad I was able to experience and know that. It made me see myself differently. It really did.

I know you were worried going there about being accepted. I liked that family member, who when he saw all the pictures that you brought, said, “Our family very international.”

Yes, that was a hard moment. As I said, I didn’t think I would be accepted as being Japanese. I had to figure out a way to make us acceptable to people that I thought may not be that open to having black great-grandchildren, etc. So by showing a picture of my mother in Japan with her family and showing the journey that we had gone through and the last picture was Kamau (Nobuko’s son) with his black wife. It was obvious he was Muslim, obvious he was black with his black children and wife. And how beautifully they accepted it, you know. It just broke my expectations and my fears.

This article was originally published in discovernikkei.org, a project of the Japanese American National Museum, Los Angeles.

Owing to limited space, the NAP snipped its  last 800 words. Read them at DN.

Edna Horiuchi is a retired third grade teacher. She enjoys traveling and is trying to learn Japanese.

Liberty and Justice for All