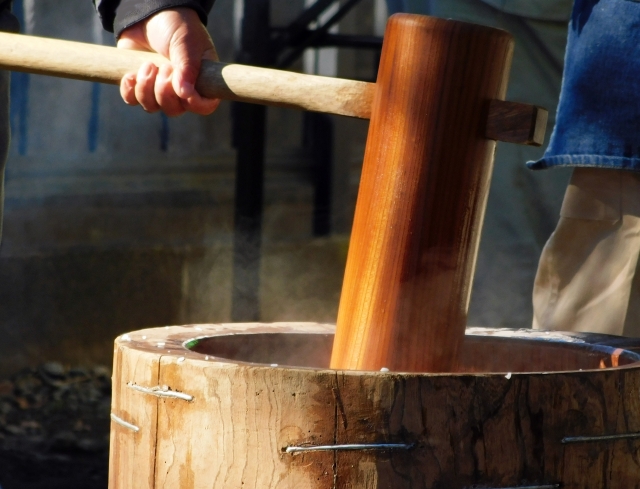 Once upon a time in America in the homes of people of Japanese ancestry, New Year’s Day was Christmas, Fourth of July, Thanksgiving and Hanukkah– all rolled into one

Today, only a handful of first generation (Issei) remains who remember the significance of New Year’s Day observance. Currently, the second generation (Nisei) is fading and their memories often are only exchanged in nursing homes and assisted living facilities.

Our parents gave the Thanksgiving turkey and Christmas tree a quick pass, serving only as mileposts to the New Years. The key element was the traditional Japanese food. The dishes had to be tasty as well as displayed properly on appropriate dishes and plates.

There was also an unspoken competition among mothers. Well before Christmas, Mom brought out the ceremonial plates, dishes, pots and pans, special rice cake and gelatin molds from storage. She commandeered the family dinner table for her work bench.

We watched in awe as Mother bustled from table, sink, counter, and stove top to oven. Our small kitchen soon became “off limits” except for my older sister, Sono, whom Mom hoped would learn and pass on the tradition to her generation–the Sansei.

Out of the seeming chaos, Mother had multi-tasking to perfection (perhaps raising five children and a full-time job contributed).

When the rice was pulverized into a gooey dough, the women took over, deftly shaping and kneading it. Today, an electrical kitchen bread maker shortens the task.

Most of the mochi was laid out and cut into rectangular, one inch thick, pieces—similar to sheet cakes. Some of the mochi, tasteless and gummy, was shaped into round wheel-like objects of various sizes. These pie-shaped pieces were usually stacked about three high with a large red lobster or a tangerine (mikan) orange on top.

Soon the kitchen was filled with clouds of steam from cooking rice and exotic ingredients sliced, diced, broiled, boiled, baked or fried. The smell of rice vinegar, sesame oil, soy sauce and deep fried seafood and vegetables permeated our kitchen.

Carefully arranged, the food was placed on the best table, covered with silk tablecloths for their exclusive holiday appearance. We were forbidden to enter the living room where the feast awaited the day- long procession of guests.

Tradition called for mothers to greet the visitors at the door. Kimonos came out of the closets and storage chests. Fathers, usually accompanied by the oldest son, embarked on their own New Year’s safaris to report back later on their neighbors.

The visitations followed a set ritual. There is much bowing as the traditional holiday greetings are exchanged—“enryo”.

We watched from the kitchen as the formal “enryo” protocol began. After more bowing and exchange of pleasantries, the guests were led into the living room. They feigned surprise when they saw the food display.

“Enryo” is to formally refuse an offering of food or gift. Following strict rules of procedure, the host must insist and the guests must equally adamantly refuse. The invitation/refusal process continues for several minutes. The guests finally accept- but only after much ceremonial reluctance. The host is also obligated to press the invitation until its predetermined acceptance.

After the last visitor departed, we were allowed to eat the leftovers. Only then would Mother relax and begin planning next year’s menu.

Today, the sight, smells and sounds of traditional New Year’s have evaporated to the steamy kitchens, the mochi makers’ chants and.the mock protests of enyro.