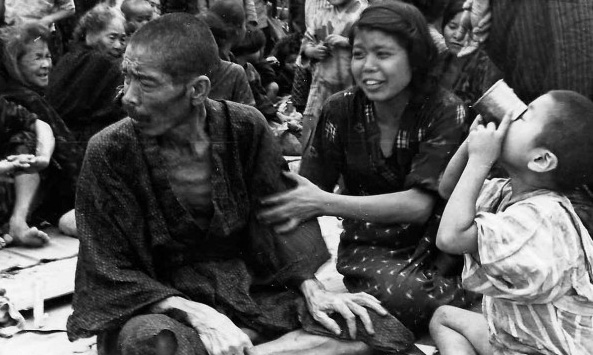 SATOUKIBI BATAKE NO UTA [Song of the Cane Fields, 2003 TV movie, 150 min., IMBD 7.6 from 24 votes] is a fictional story about the experiences of a family in Naha, Okinawa, during World War II. It is worth watching as it makes a point that is not obvious from other coverage of this chapter in US/Japan history. It is that Japanese civilians were near the center of the fierce battle for this island.

Satoukibi also merits writing about as it is a film that has flown ‘below the radar’ in the US; it is only accessible now owing to web streaming. This is because like many TV films, it was never released for international distribution.

The background for Satoukibi is that in March 1945, Okinawa was an airfield-bearing island that American forces wanted as a staging area for the impending invasion of the Japanese mainland. The largest of the Ryuku Islands—the island chain that extends south from Kyushu to Taiwan—Okinawa ended up being the setting for the last major land battle of the war.

Within this context, Satoukibi follows one family through the ensuing three months. During this period, soldiers and civilians alike were shelled, shared caves, and faced difficult decisions at war’s end. These included whether or not to surrender, when all had been indoctrinated by their government to fight to the last. Estimates of civilian casualties range from 40,000-150,000 of an original population of 300,000.

One measure of Satoukibi‘s overall quality are the many well-known, early Heisei [1989-] TV personalities and actors it features. These include Akashiya Sanma [of Koi no Karasawagi, Much Ado About Love], Yukie Nakama [Gokusen], and Aya Ueto [Azumi].

Like other WWII dramas set in Okinawa, Satoukibi also highlights the role of Japanese-American army interpreters. While the latter are not seen on camera, their voices are broadcast to the caves as they tried to save lives near war’s end.

All this being said, a few language notes are in order, as there are only two postings of Satoukibi on YouTube. Of these, the English-subtitled copy is of poorer reproduction quality than the untranslated Japanese one. Thus, I would encourage readers who can to watch the Japanese version.

Here, the prospect of watching Satoukibi in Japanese is made less intimidating by the fact that its conversations mainly occur between family members. Thus, the vocabulary is that of familiar home discussions. Moreover, the topics are clearly evident from scene settings. For example, an early sequence shows the father (Akashiya) rescuing important family photos from their burning house. The dilemma—that of the value of material possessions versus life—is evident to all.

One last interesting language detail of interest to JA viewers is that the Nisei interpreters are depicted as speaking ‘bata-kusai’ Japanese, words that ‘smell of butter’ [of the West], typical of young Americans in Japan today. While this is an understandable drama device to help mainstream Japanese viewers instantly grasp that the broadcast voices are those of Americans, JA readers will remember that pre-1970s Nisei Japanese, especially that spoken by those who had been army interpreters, was not so bad. Nearly all were raised speaking Japanese as their first language at home. Moreover, the interpreters were among the best skilled of their generation.

The events portrayed in Satoukibi set the stage for present-day US military bases on Okinawa. These frequently make the news in relation to international diplomacy among the US, China, Japan, Korea, and Russia.