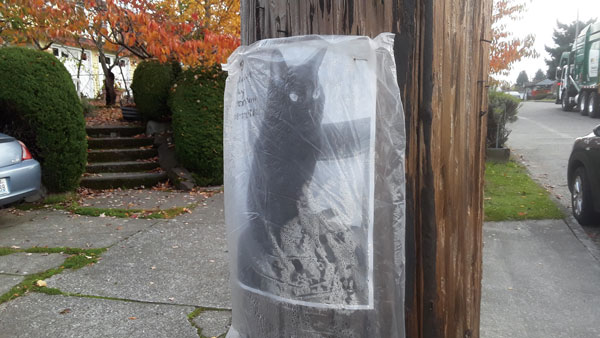 IN THIS COLUMN, I consider topics of interest to many readers. Yet in my own life I wrestle more commonly with smaller problems that matter only to me and to the few people around me.

One such dilemma began on a hot early September day, when I opened a window two inches wide, and forgot to set the window lock. That opening was just wide enough for “Ichi,” my mischievous, four-year old, black male cat, to push open and leap to freedom.

This would not have been noteworthy except for one thing. My current cats, a mother-and-son pair, are inside cats. For this duo, the proprietor of the kitty shelter in West Seattle had stressed to me—a cat owner for much of my life—the importance of keeping them in. For unknown to me, the cat world had changed since I had last brought home a cat, in 1997, to “mouse patrol” my parents’ home. Today, there is such a thing as “kitty AIDS.” Cats infect each other with deadly viruses by biting during fights.

My new inside-cats program had gone well enough for four years, until the recent “prison break.” The escape exposed its critical flaw. My cats don’t know where they live. They can’t recognize which house is theirs from the outside.

As I began searching for my fugitive, I did the normal things. I walked the neighborhood, calling his name and shaking his favorite bag of dry cat food. I explained my quandary to neighbors when I saw them. I posted it on the neighborhood Facebook group, and later on telephone poles. I consulted Google.

Through my hunting and reading, I learned that scared cats may not come when called. This behavior fit with Ichi’s personality. He is a “fraidy cat” wary of all strangers, and sometimes, even of me.

After two weeks, a text from a neighbor two blocks away gave me my first hope. She had spotted him hiding under a pine in her front yard.

But learning that Ichi was still alive and approximately where he was hanging out was a far cry from getting him home. Another neighbor warned of a recent coyote sighting. He urged me to bring in my cat in as soon as possible.

After another unsuccessful week went by, I set up a live trap I purchased from Amazon. This is a wire cage with a trap door that closes when an animal—lured by bait such as cat food—steps on a panel inside.

During the next two weeks, I gathered wandering black-cat sightings from neighbors, moved and reset the trap, and checked it daily. The first three times my neighbors and I caught cats all right, just the wrong ones.

Then one day, I happened to be looking out a back window when an Ichi-like black cat ran by. I went out immediately to call him, but he was already gone. And so I quickly moved and reset the trap.

The next morning, I had caught a black cat all right. But was he Ichi? While the new cat resembled him, unlike him he was really angry. I placed the odds of the cat being Ichi at only 50%. Still, I was afraid to release him, for the chances of trapping him again would be slim.

I decided on a middle-of-the-road plan. I learned this by occasionally reading about Buddhism for this column. When you are unsure of what to do, take the middle path.

I would take the mystery cat in for two days, leaving him in the cage in my bathtub, so he wouldn’t have an opportunity to bite my Mama cat. In the meantime, I’d feed him a can of cat food a day, his normal fare if he was Ichi.

If Angry Cat turned out to not be Ichi, he would get two cans of food and 1-2 nights out of the rain out of the deal, after which I would let him go. It seemed like a fair deal to me. I left for work.

At the end of the second day, I still wasn’t sure that the trapped cat was Ichi. On the positive side, he had calmed down. While he still disliked being caged, he purred on my approach. He licked my fingers through the cage. It was a big contrast to an earlier cat who bit my finger. Still, it was hard to know for sure.

It was time to let Not Angry free inside the house, to see if he knew it. And so, after putting Mama in quarantine for safety, I set the black cat loose.

The freed cat sat in the same places Ichi did. Like him, he curled up at the foot of my bed to sleep. In the middle of the night, he rubbed his head against mine where it emerges from the covers. He was Ichi all right.

After confirming Ichi’s identity, I still had to keep the two cats separate until the veterinarian could check him over. As the first appointment I could get was three days out, during this period each cat got a half day of house freedom and a half day of quarantine in turn.

The vet found Ichi remarkably healthy. He looked good. He lacked bite or scratch wounds. He was free of ticks, rabies, and other diseases. He was just underweight; he was down to 8.1 pounds from his previous 11.6.

What had he been eating for five weeks? How far from home had he roamed before coming back? While the most common distance for sightings was two blocks away, the farthest had been seven blocks away. There is no way to know if the latter cat was Ichi.

As winter cold and Thanksgiving approach, I am just happy to have Ichi back, to have my household back together again.

To be sure, with Ichi’s return, I have been reminded that he can be a pain in the oshiri sometimes. He sneaks his mother’s crunchy food, which he craves, but can’t have owing to a past urinary condition. He picks on her, a cat half his size. He gets into groceries that aren’t three shelves high in the kitchen. I cannot leave anything edible on counters, including dry pasta, dry lentils, and the like.

Still, it seems my household isn’t complete without one rascal. He keeps his mother company during the day.

My cats keep me company as well. They help me feel secure in the night.

Moreover, my cats help you, dear reader. For they dispel the darkness that all writers feel when we face blank computer screens or poorly written passages. They keep me sitting patiently until the words come.