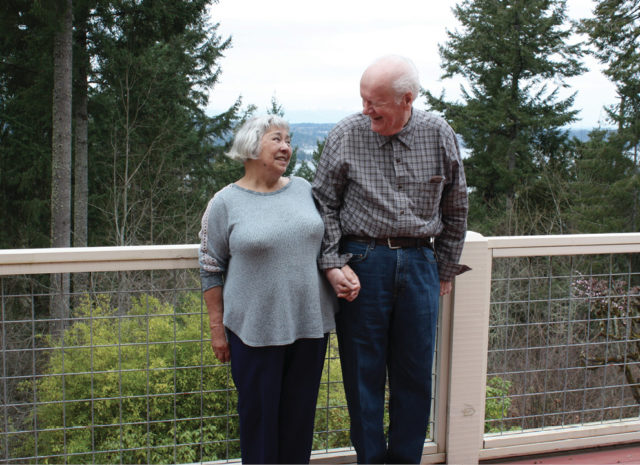 What was it like for an Irish Catholic American man and a Japanese woman to get married during the Occupation? Mike and Tsuchino Forrester’s story about getting married in the 1950s in Japan and moving to the US in 1960 reminds us of how far we’ve come when it comes to accepting international marriages. Mike wrote a book called Tsuchino: My Japanese War Bride to record what the couple went through. In it, he tells the story of their love affair, marriage, and subsequent move to the US. The couple, married for more than 60 years, seems content and well-suited to each other. Tsuchino has been serving as board member and co-president for Japanese Community Service in Seattle for about 20 years and the couple has been heavily involved in and contributed to Seattle’s Japanese community since they became local. The North American Post visited their home in Sammamish to talk to them about their life together. In between the stories of prejudice and hardship, the two of them shared a lot of laughs. Excerpts from the interview follow.

How did your families react to your decision to get married?

Mike: She was such a knucklehead that her family figured, if that was what she was going to do, they wouldn’t oppose it. My grandmother was against it. When I was sent to Japan, she said, don’t bring back a Japanese bride. My mother was against it. My father thought it was great. He was the one I thought would be against it because he fought in the Pacific for the Navy in Okinawa, which was really a bad one. But he thought it was great.
Eventually, one time when I was in New York, my mother told me that I had found a good wife. For her, that was quite a compliment.

Mike: I was born in 1937 in Brooklyn, raised in Queens, in Long Island City. When I was young, we were very poor. We lived in a housing project. I remember hearing the radio announcement about Pearl Harbor. We came in and all the adults were listening. You could tell something was going on. You could feel it. We went to say something, and they would go, Sssh!

You met when you were quite young, in the mid-50s. Did you have ideas about what an American man and Japanese woman were like?

Mike: My idea of a Japanese woman was that she would do whatever you told her to do. What a shock! She is the master of the house. I say, Yes sir!

Tsuchino: My only goal was to make him go for good education since I was not able to do so for myself. I pushed him hard for that, but nothing else bothered me. If I have to eat just two meals a day, that’s fine with me.

Mike: Talk about frugal! Talking to other guys with Japanese wives, we found out that almost all of the wives had accumulated what we called “rat-hole money.” They basically took a little bit each week and put it aside to go back to Japan. It was like a security blanket. If it didn’t work out, they had the money to go home.

When you first met, what did you think of each other?

Tsuchino: I thought he was a snob.

Tsuchino: I thought, wait and see. I’ll show you my Japanese spirit.

Mike: I was really impressed. She had long, black hair. She was small, very thin, and I thought she was really, really beautiful. And she thought I was arrogant.

Tell us about your wedding.

Mike: When I came back to Japan, I wanted to get married right away because I didn’t trust the military. Originally, when I asked permission to get married, they shipped me home. I had another year left on my tour. But I was gone in about two or three weeks. At the time, I was really upset about it. But looking back, I think the higher-ups thought they were doing me a favor. At that time, most of the higher-ups had fought in the war. Even though it was peacetime, when you’ve fought in a war, you just never have the same feeling as people who haven’t. Plus they thought they were keeping me from making a mistake.

Mike: The military wouldn’t let us travel together because they didn’t approve of our marriage. She had to go on commercial flights and I went military. The military took me as far as San Francisco; then I was on my own. We didn’t have any money to get me from San Francisco to New York, so we had to borrow it from her brother.

Tsuchino: You never gave it back, so it’s not really “borrow.”(Laughter)

Mike: And he paid for her ticket all the way to New York.

Tsuchino: We had to go so quickly and I was only allowed to bring $300. My family wanted to give me more money, but I couldn’t take it.

I came to this country in 1960. I slept with my mother-in-law the first time I met her. There were so many relatives staying at the house and there weren’t enough beds for everyone. Typically, Irish funerals were big.

I flew to Seattle, and it took so long to get through Customs that I missed our plane to New York. I had to stay all night in Seattle. It was summertime, and I remember I couldn’t sleep because it was so bright! I remember thinking, does it never turn to nighttime here? I didn’t even eat. I was so afraid of missing the flight again.
As I got close to New York, I started to shake. I started wondering what I would do if Mike’s family isn’t there. I know their address, so I guess I’ll get a taxi. But the family wouldn’t be home because they’d all be at the funeral home. I must have had an unsteady face, because a Japanese businessman on the plane asked if I was traveling alone. I told him I was going to New York and there was supposed to be family there, but I’m not sure. He said, don’t worry about it. He said he would hire a taxi for me. I said, thank you so much, and I kept my eye on him to make sure he didn’t disappear! (laughs) So I followed him off the plane, and there was family there, and that’s when I half-fainted for the first time in my life. We went straight to the funeral home. I was surrounded by Irish people at the Irish wake. Mike told me Irish wakes and weddings are the only times they see each other.

Mike’s grandmother told me to sit down next to her. She said, you come from Japan and he’s not here. The Irish spirit is the same as the Japanese spirit. She kept me next to her, which was an honor because she was the family’s boss.

How old were you then?

Tsuchino: I was 26 at that time. I had to remind myself that this was the land of opportunity. If I go there, I can make my own way. If I stay in Japan, I do what the family tells me.

Mike: They would have never found a Japanese man who would put up with her. (They both laugh.)

Did you ever miss Japan, Tsuchino?

Tsuchino: No. I didn’t even miss rice! I didn’t have a rice cooker. We would go to Safeway and they didn’t even have soy sauce. They had Chun King Sauce. I made sukiyaki with Uncle Ben’s rice, Chun King sauce, meat, no tofu or anything.

Tsuchino: Nobody ate it! When I moved to Seattle, I was able to find Japanese everywhere. I became involved in Kisaragi-kai (a women’s group located in Seattle that does community service and is a means for the women to keep their Japanese culture alive).

You moved around a lot?

Mike: Yes, Tsuchino used to tell me, as soon as we get new drapes, we move. We lived in Washington D.C., Spokane, Kansas City, Wilkes-Barre PA, Brentwood N.Y., San Francisco, Alaska both Anchorage and Fairbanks, Madrid Spain and Seattle.

Tsuchino: Every two years, we moved. When I saw Seattle, I thought this was the place to settle for us. Halfway to New York, halfway to Japan, it’s perfect. But in Seattle, because of the Japanese community, I had to do this and this, and pretty soon there was no weekend!

Why did you write the book, Mike?

Mike: We kept getting these professors from Japan coming over. They wanted to know our story and our background. It got to the point where I kept repeating the same thing to so many different person. I guess the Empress had mentioned at one time that she wondered what happened to all the Japanese women who left Japan after the war. That’s all it took. All of a sudden, all the professors started coming over, doing research. I finally decided it was easier to write the book than to constantly talk about it.
First, I made an outline. And as you get into it, you start remembering things. It was easier than I thought. I think I did it in about three months.

Did you two talk a lot during the writing?

Tsuchino: No. Because once he says something, I’d say, I don’t think so! (laughter)

Mike Forrester, born in New York in 1937, joined the Air Force in the 1950s and was sent to Japan, where he met his future wife, Tsuchino Matsuo of Kyushu. The couple married in 1957 and eventually moved to the US. Mike graduated from Columbia University with a bachelor’s degree and the University of California, Berkeley, with a master’s in civil engineering. After his time with the military, he worked in the Federal Aviation Administration. After retiring, he and Tsuchino created a software company, which they sold in 1999. They live in Sammamish.