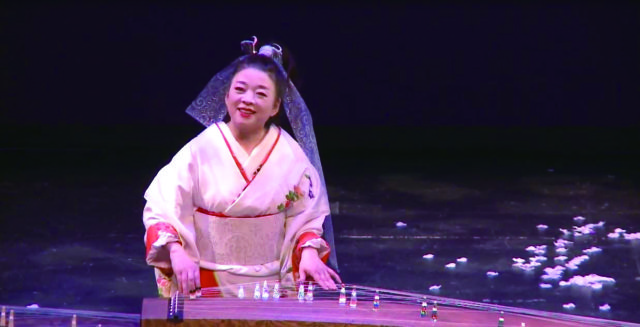 Well-known Japanese traditional music performer Senju Matsuunami comes to Seattle and Portland this fall. Senju started playing koto (a 13-string instrument) at the age of six. She graduated from the Japanese music department of the Tokyo University of the Arts. In 2011, Senju established the Matsunami School and served as its president. She has hundreds of disciples whom she teaches, and her lessons are held regularly in five cities throughout Japan. She has been on NHK and other Japanese TV shows and FM radio programs.

“I’ll be happy if I can present a spectacular and enjoyable stage show that brings us closer together and deepens the understanding of Japan,” Senju said. At last year’s concert, she was able to end the program with music from the Tohoku region. “It was meant to express my gratitude for the Americans who came to our support early with Operation Tomodachi after the March 11 East Japan earthquake.” This time, the musicians are paying their own way to the US and not being paid for their performances. Through the NPO Japanese Cool, profit from the performances will be used to help the people in the Houston area afflicted with major flooding and damages. “Some people may not even have heard of the koto,” Senju said. “If I can make them fans of Japanese instruments, I’d be very happy.”